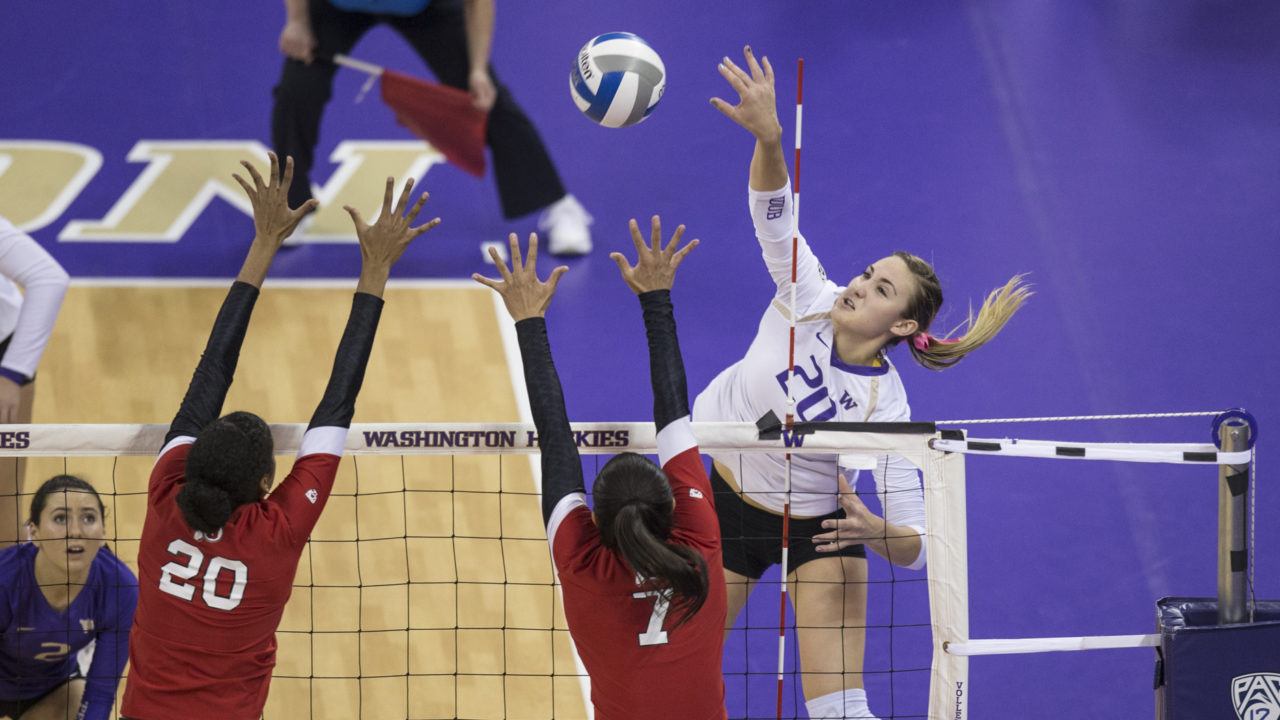 Down 24-20 in the first set, the #15 Washington Huskies scored six consecutive points on their way to a straight-set victory over the California Bears. During that run, senior Tia Scambray recorded three kills and another three block assists.

“Executing in some critical moments in the first two sets, and then making the third set better than the first two were the obvious bright spots,” said Head Coach Keegan Cook. “I thought Tia played a great, complete game today, being great on both sides of the ball, her performance stood out.”

Scambray ended the match with 13 kills and five blocks. Other key contributors for Washington included senior setter Bailey Tanner, who scored a double-double (29 assists, 10 digs), and senior outside Carly DeHoog, who had eight kills and three blocks.

For the Bears, senior outside Antzela Dempi led the offense with 11 kills, while sophomore libero Emma Smith anchored the back-row defense with 13 digs.

Cal was without the services of two injured starters: senior outside Christine Alftin and junior setter Mackenzie Albrecht. Switching from a 6-2 to a 5-1 offense, freshman setter Isabel Potter set all six rotations and sophomore opposite Maddie Haynes notched eight kills while hitting at a .400 clip.

In the first set, the Bears led 24-20 before Washington answered with the strong blocking and offense that led to the 26-24 win. The second frame found the Bears again coming up on the short end of a 26-24 score after they had stormed back from a 23-20 deficit. The third set was all Washington and they won by a comfortable 25-17 margin.

Washington hosts #13 USC on Friday, while Cal travels to Arizona to play the Wildcats, also on Friday.

BERKELEY, Calif. – Facing four set points in the opening set, senior Tia Scambray was in on three blocks and also had three kills as the Huskies scored the final six points for a 26-24 win over the Cal Bears. That sparked the 14th-ranked Huskies to a sweep, as UW won the next two sets, 26-24 and then 25-17, with Scambray leading the team with 13 kills and five blocks.

“Executing in some critical moments in the first two sets, and then making the first set better than the first two were the obvious bright spots,” said Head Coach Keegan Cook. “I thought Tia played a great, complete game today, being great on both sides of the ball, her performance stood out. Avie and Kara are both capable players and have had meaningful experience and so I thought Avie did a nice job coming off the bench defensively, and Kara took some good swings on both the left and right, so it was good to get some contributions from them when it was needed.”

Tanner set Sanders on a quick for UW’s first kill of the day. A block from Sanders and DeHoog had it at 3-3. Cal scored four straight to double up the Huskies at 4-8 until a Jones finish snapped the run. Tanner back set to DeHoog for a point scorer for 8-10 Bears. Scambray leaned into one crosscourt for 10-12, but Cal put on a 3-0 run to make it 10-15 and UW needed its first timeout. Cal had a block out of the break for another point before Hazelwood put one away for 11-16. Jones hit down an overpass and then Schwan hammered two straight kills in transition to pull UW back within three at 14-17. Sanders had a good pass on a short serve and Jade Finau connected with Jones for 16-19. Schwan put another away past the block to cut it to 17-19 and Cal took time. But the Bears responded with two in a row out of the break and UW had to use its last timeout back down four. DeHoog and Sanders had a stuff on the next rally, and then Tanner set Sanders on a quick for a transition kill for 19-21. The Bears scored twice to reach set point at 20-24. Scambray killed one in serve-receive and then teamed with Hazelwood for a block to eliminate another. The play repeated as Scambray produced another brick wall block for 23-24 and Cal took time. Finau’s serve put Cal in trouble and led to a Scambray transition kill to tie it up at 24-all, and then Scambray finished another from Finau to score a fifth-straight and UW had set point at 25-24. The Bears tried to swing at Scambray and Hazelwood again on the next rally, but the two stuffed it down for a third time to give UW the stunning victory, 26-24, with three kills and three blocks from Scambray on the final six points. Despite the close margin of victory, UW easily outhit Cal, .333 to .205 in the set, and had five blocks to just one for the Bears. In remarkable distribution, five Huskies had three kills apiece and Scambray had four.

Cal scored the first three points of set two but then UW answered with three in a row, including a DeHoog finish from the left and an ace up the sideline from Schwan. Errors hurt both teams early, with UW tying it up at 8-all on a double contact by Cal. Avie Niece checked in to the middle and had her first kill for 9-9. Niece then soared for a stuff for an 11-9 Husky advantage. Niece put down two more Tanner quick sets to keep UW siding out. Cal moved on top by one but Jones retied it at 15 with a swing from inside. The Bears scored three of the next four to open up a two-point lead at 16-18 and the Huskies took time. Schwan delivered a blast up the left sideline for a big point out of the timeout, and then UW tied it on a Cal double forced by a tough Tanner serve. Niece had a kill in serve-receive and then Scambray had another block on the left pin for 20-19 Dawgs and the Bears called timeout. Out of the break, DeHoog dropped off the net for a key dig on a Cal tip, and Scambray finished for a big point. Scambray then added another transition kill off a McPherson bump set for 22-19 and the Bears called their last timeout. UW led 23-20, but in a reversal of the first set, Cal scored three in a row to tie it up at 23-23 and the Huskies took time. A perfect pass from Scambray let Tanner set Hazelwood for a kill to reach set point at 24-23. The Bears saved it despite a good swing from Scambray, but Jones got one to fall to get another set point chance. Scambray went to serve, and drove one hard up the sideline and the Bears had just one spot to set it, which helped Jones and Hazelwood camp out and stuff the swing down to clinch the set, 26-24. Niece and DeHoog both had four kills in the set and UW had a 3-0 blocks edge to help make up for being outhit, .143 to .150.

The Dawgs won the first two points of the third set but then gave up five straight points, three on their own errors. Sophomore Kara Bajema checked in and got UW out of that rut with a kill on her first swing. That sparked a five-point run right back UW’s way with kills from Niece and Scambray for a 7-5 lead. The set of runs continued as Cal had three in a row before a Scambray kill made it 8-8. That put Julye at the service line, and all she did was ace Cal three straight times to force a Cal timeout with the Dawgs up, 11-8. Schwan had a long bump set crosscourt to Jones for a kill for 15-11 Dawgs. Schwan crushed one crosscourt to make it 17-12 and force the Bears into a timeout. Cal scored out of the break but Bajema answered in serve-receive. Bajema added two more big swings from the right, and then UW finished a long rally with a Scambray crosscourt kill to build a seven-point lead at 21-14. A couple Bear miscues and it was match point Dawgs, and Scambray made a tough swing from the 10-foot line work high off the block and out for the win, 25-17. The Huskies hit .289 in the final frame, with six kills from Bajema, and six from Scambray.

Depleted Bears Give No. 14 Washington A Scare

BERKELEY – The Cal volleyball team wasn’t about to feel good about its loss to No. 14 Washington on Sunday.

The Bears, despite playing without two starters, still did a lot of good things against one of the top teams in the country before falling 26-24, 26-24, 25-17 at Haas Pavilion. There were some frustrating moments for Cal, most notably having a 24-20 lead in the first set only to watch the Huskies score six in a row to win it.

“There are all the negative emotions that come with a loss – you are frustrated, disappointed and angry,” Cal head coach Matt McShane said. “But I think once we have a chance to realize what we just did, we will be optimistic and anxious to play again.”

The Bears played without senior team captain Christine Alftin and junior setter Mackenzie Albrecht, each of whom missed the match because of injuries. That forced Cal to switch from a 6-2 offense (two setters) to a 5-1 (one setter), with freshman setter Isabel Potter playing the entire match.

Without Alftin, it also gave an opportunity for sophomore Maddie Haynes to receive some more playing time, and she responded with eight kills at a .400 hitting percentage.

The Bears (12-9, 3-7 Pac-12) came out sharp to begin the match, ultimately opening up a 17-11 lead. After the Huskies trimmed the deficit to 22-20, Cal got kills from freshman Preslie Anderson and senior Antzela Dempi to give them three set points. But Washington, which leads the Pac-12 in blocking, came up with three huge blocks to spark the comeback and win the set.

The second set was close throughout and this time it was the Bears who staged a comeback, although it fell just short. Trailing 23-20, some tough serving from freshman Mima Mirkovic helped Cal score three in a row to tie it up. The Bears staved off one Washington set point on a kill by Haynes, but the Huskies registered another block to end the set.

Dempi led the Bears with 11 kills. The Pac-12 leader in aces, she failed to record an ace for just the fifth match this season.

The Bears will be back on the road next week, beginning with a visit to Arizona on Friday. The match begins at 6 p.m. and airs on the Pac-12 Networks.