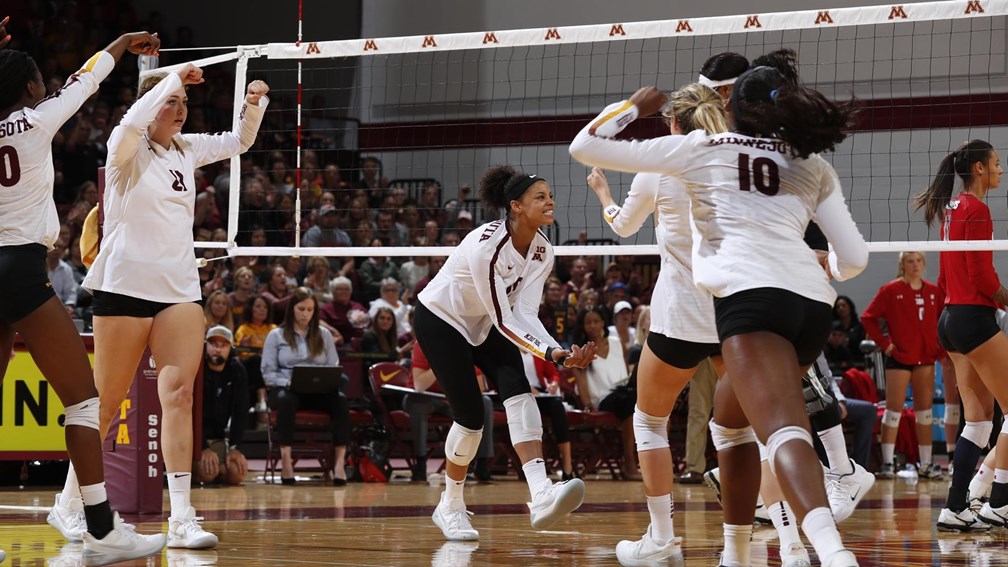 • Averaged .467 in No. 6 Minnesota’s sweeps against No. 5 Wisconsin and Indiana over the weekend

• Garners her second career Player of the Week decoration

• Followed with eight kills, four blocks and three service aces in a 3-1 win at No. 7 Illinois

• Earns her first career Player of the Week honor

• Led the No. 9 Nittany Lions defensively over the weekend, helping hold No. 17 Michigan and Michigan State to a combined .120 hitting percentage

• Against the Spartans, scooped up 11 digs, dished out four assists and an ace, was also perfect in serve receive and held Michigan State to a .082 hitting percentage

• Tallied 15 digs for 5.0 digs per set against the Wolverines and added one assist while holding Michigan to a .150 hitting clip

• Collects her fourth career Defensive Player of the Week accolade

Kendall White and Serena Gray were honored by @B1Gvolleyball for their play at Michigan State and Michigan! Read: https://t.co/QTq4RyNn5S pic.twitter.com/U6kwJCXeWI

• Led No. 6 Minnesota to sweeps of No. 5 Wisconsin and Indiana averaging 12.5 assists per set and helped the Gophers to a .371 hitting clip on the weekend

• Against the Badgers, tallied 39 assists and facilitated the Gophers to hit .386 in the sweep, also added two aces and eight digs

• Directed Minnesota to a .356 efficiency as she had four hitters earn double-digit kills, had a team-best 13 digs, surpassing the 1,000-career dig mark

• Grabs her 13th career Setter of the Week award

•  Averaged 2.33 kills per set on a .545 hitting percentage while averaging 2.00 blocks per set this weekend against No. 17 Michigan and Michigan State

• Also added three digs and finished with 20.0 points on the weekend while leading the team with six blocks in both matches

• Against Michigan State, Gray was second in kills with nine, hitting .571 and added three digs

• Accepts her first career Freshman of the Week honor