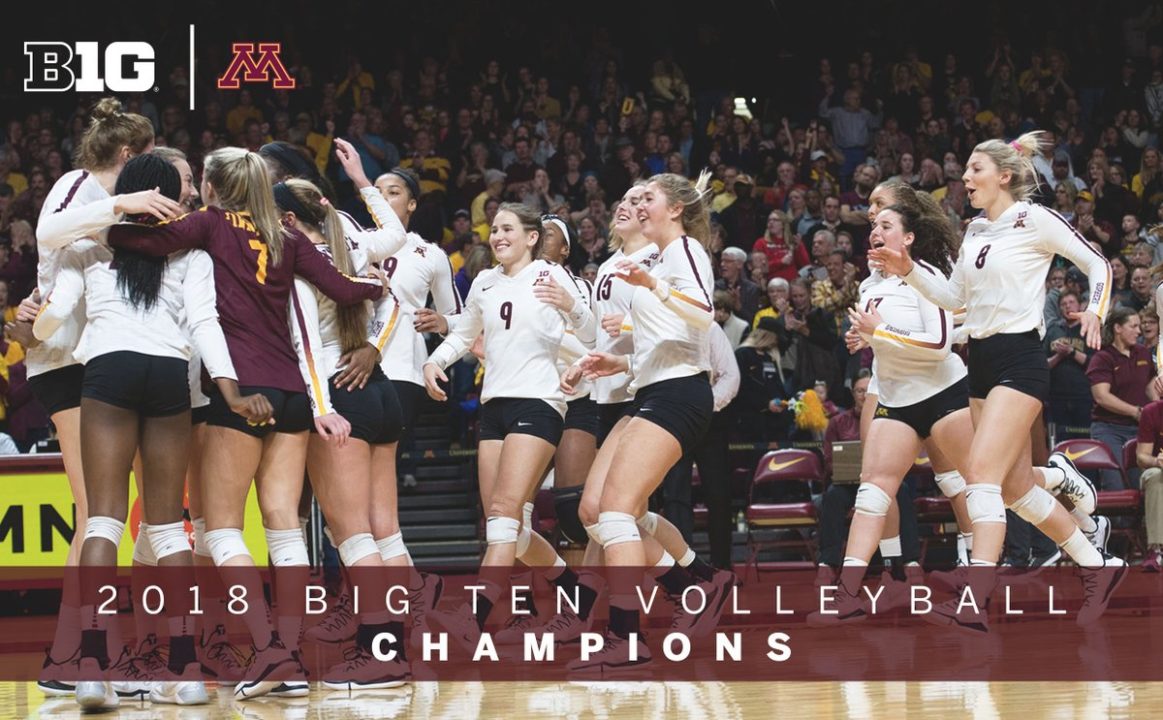 The 2018 championship marks the third conference championship for the Gophers in program history and the second since 2015. Minnesota clinched the title outright on the last game of the season in 2015, while the Gophers still have two matches remaining in the 2018 regular season schedule (Penn State and Rutgers next weekend).

With the win, the Gophers also punched their ticket to the NCAA tournament. With no conference tournament in volleyball, the Big Ten regular season champion solidifies the league’s automatic bid.

Regan Pittman led the team with a career-high 20 kills while hitting .594, and also chipped in three aces. Stephanie Samedy notched a double-double with 17 kills and a team-leading, and career-high, 21 digs. She also posted a career-high five aces. Alexis Hart recorded 14 kills and was followed by Taylor Morgan who added 11 kills while hitting .500. Morgan had a team-best four blocks. Samantha Seliger-Swenson recorded a new season-high 58 assists. CC McGraw produced 18 digs and was followed by Adanna Rollins with 10.

Minnesota has one week of regular season to go when it travels to Penn State and Rutgers Thanksgiving weekend.

Set 3: Minnesota commanded the third set from the 4-3 point en route to a 25-13 win. In the set, the Gophers hit .393, and limited OSU to .000 as it had seven kills and forced seven attack errors. Samedy added back-to-back aces for a 7-3 lead. After a Hart kill at 9-4, OSU used its first timeout of the set. The Gophers, however, continued the pressure and went up 12-5 off a Morgan kill. Minnesota went up 15-7 off an OSU attack error as the Buckeyes called their second timeout of the set. Morgan added a kill on the quick set for a 16-8 lead and 20-10 on a McGraw ace. Pittman added four kills at the end of the set, while she and Hart combined for a block to win the set and take a 2-1 lead.

You are going to want to watch this! Pittman puts down set and match point to secure the Big Ten Conference title for the #Gophers! pic.twitter.com/2ysCo0v4U1

Hear what Coach Hugh McCutcheon had to say after the #Gophers won the Big Ten Conference Title outright! pic.twitter.com/hjieEPBk3o

It was a night of career marks for Ohio State. Bia Franklin posted career highs in kills (16), points (20) and service aces (4) and combined it with 13 digs. Becca Mauer chipped in a career-best 14.5 points and 13 kills with nine digs and two blocks. Olivia Dailey was all over the court as she hit .300 (5-2-10) and dished 53 assists, both career highs. Camry Halm dug a career-best 32 balls and handed out seven assists. Vanja Bukilić (12), Lauren Witte (10) and Adria Powell (8) also got in on the kills while Hannah Gruensfelder notched 14 digs.

SET 1: The Gophers started the match on a 6-1 run but the Buckeyes responded by going on a 9-2 sprint to get ahead, 10-8. The teams traded points to lock the rally at 23-all. Back-to-back kills by Franklin clinched the set for Ohio State, 25-23.

SET 2: It was another back and forth battle that had Minnesota calling for time as Ohio State went up 19-18. Out of the break, the Gophers found their momentum to earn a 25-20 triumph.

SET 3: The Buckeyes burned a timeout early as they trailed 15-7. Ohio State tried to hang around but it wasn’t enough as Minnesota powered ahead for a 25-13 winner.

SET 4: Neither team was willing to give up much ground to open the frame. Ohio State fought to take a 17-14 lead, which sent Minnesota to its bench. The Gophers cut the deficit to one but Bukilić came through with a pair of kills for a 25-23 decision.

SET 5: Minnesota jumped out to an 8-5 advantage at the midpoint of the set. Ohio State stayed close but came up short, 15-11.

The Buckeyes will wrap up the regular season on the road at Nebraska (Nov. 23) and Iowa (Nov. 24).

Any B1G championship is a remarkable thing, but it sure helps when Nebraska and Penn State are both in the reloading stage. . . we’ll see how this all plays out. ..my guess they won’t even make Minneapolis to do anything except watch . . .

Yeah, and Nebraska is turning it on late