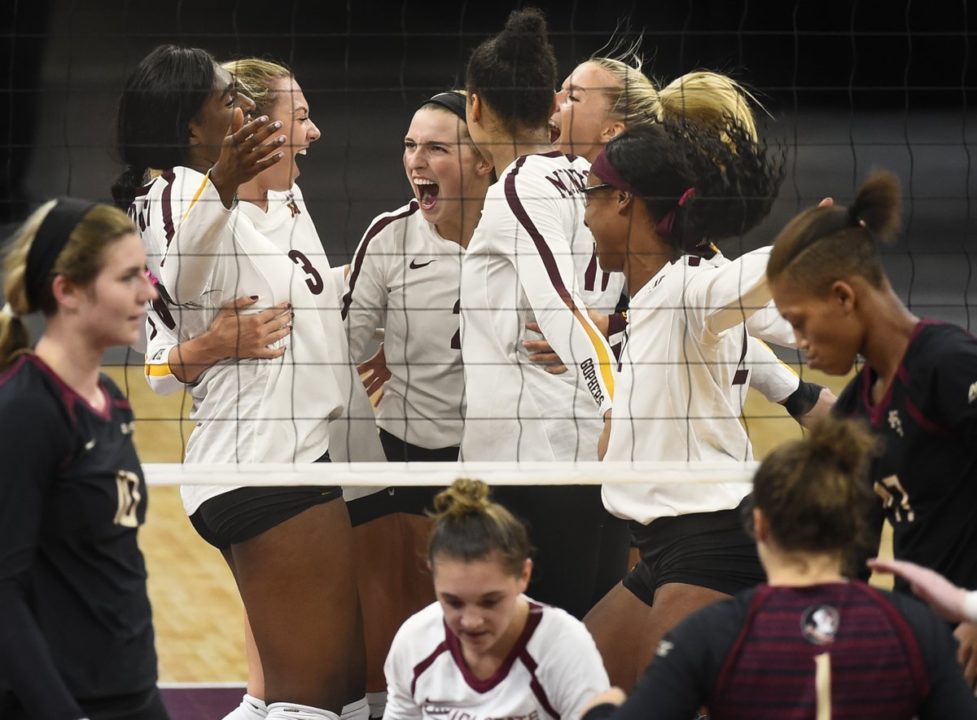 The Big Ten was the superior conference in Minneapolis this weekend as No. 2 Minnesota and No. 4 Wisconsin finished off a 4-0 effort against Florida State and North Carolina with four-set wins.  Current Photo via Minnesota Athletics

The Big Ten was the superior conference in Minneapolis this weekend as No. 2 Minnesota and No. 4 Wisconsin finished off a 4-0 effort against Florida State and North Carolina with four-set wins.

Key Stats: In a tooth and nail matchup, both Wisconsin and Florida State racked up 11 blocks, limiting one another to hitting percentages under .200 on the night. The Badgers hit just .169, while FSU managed a .148 effort. Both teams started strong with the Seminoles hitting .310 in Set 1 and Wisconsin notching a .258 effort. From there both teams struggled with errors, 23 for FSU and 22 for UW. The Badgers led 56-51 in kills and 8-4 in aces, while the Seminoles came up with 82 digs to 68 for their foes.

Stat Leaders: Madison Duello (15), Grace Loberg (13) and Molly Haggerty (10) paced the Badgers offensively. Duello hit .379 and added five blocks, while Haggerty rounded out a double-double with 10 digs. Loberg hit just .060 for the match (13-10-50), but was tops on the team defensively with 15 digs to go with three blocks and two aces. Setter Sydney Hilley also managed a double-double with 45 assists and 14 digs to go with a match-best four aces. Dana Rettke put up six blocks and turned in eight kills.

How It Happened: Florida State never trailed by more than four points over the first three sets, setting up a Set 1 rally of six straight points to turn a 23-19 deficit into a 25-23 win. Ambrose downed three kills and Murray added two in the final rally.

The teams tied 10 times in Set 2, last at 24-all. After a tie at 9, the Seminoles built a four-point lead at 17-13. Four stuffs and a kill by Rattke had Wisconsin on top at 22-21. Putaways by Loberg and Rettke gave the Badgers a set-point try. A stuff by Ambrose and Knuth tied it up at 24, before Duello and Tionna Williams capped a 26-24 UW win.

FSU led by four at 11-7 in Set 3, but Wisconsin again found a way, turning things around with an 11-3 run including three Seminole errors and three kills and a block by Loberg. After falling behind 18-14, Florida State chipped away, pulling within one at 23-22 on back to back UW hitting errors.  A Haggerty kill and FSU service error clinched a 25-23 victory.

Wisconsin grabbed a 10-6 advantage in Set 4 with help from three FSU errors and three Haggerty putaways. The Badgers upped the margin to seven at 16-9 on a Rettke kill. The teams traded 4-0 runs, leading to a 20-13 score. The Seminoles scored five straight, two on UW errors, to pull within two at 23-21, but Williams and Loberg cut the rally short and ended the match.

“Although we went 0-2 this weekend, it was against two of the top 10 teams in the country,” FSU head coach Chris Poole said. “Six of the seven sets we played this weekend were all competitive. We had our chances, but just simply made key mistakes. At the same time, this team has a lot of potential and I believe they are going to keep improving every week we play. We have work to do, but this is a group of young ladies that are very hungry and want to get better this season.”

Welp, we had a good weekend. #T274 pic.twitter.com/7g7FzPTrKs

Key Stats: No. 2 Minnesota racked up 17 blocks and held North Carolina to a .164 hitting effort to start the season 2-0. The Golden Gophers hit at a .240 clip and outdid the Tar Heels 60-56 in kills in the victory. UNC served up four aces and managed 10.5 blocks in the match.

Stat Leaders: Stephanie Samedy (20) and Regan Pittman (17) were tops offensively for the Gophers, each managing double-digit kills and a hitting over .300 for the match. Samedy rounded out a double-double with 10 digs and four blocks, while Pittman hit .500 and notched six stuffs. Taylor Morgan just missed a double-double, pairing a match-high nine blocks and eight kills. Setter Samantha Seliger-Swenson dished out 46 assists and added 10 digs.

Destiny Cox turned in a 22-kill, 15-dig double-double and three blocks to lead the Tar Heels. Skylar Wine (15) and Ava Bell (11) rounded out the offense. Katherine Esterley put up a team-high five blocks, while Cox, Bell and Raleigh Clark added three stuffs each.

How It Happened: Minnesota struck first, grabbing an 8-2 lead in Set 1 with help from three Samedy blocks. Later a 7-1 run, including five UNC errors, pushed the margin to nine at 16-7. The Tar Heels would get no closer than six after that, falling 25-16 on a block by Seliger-Swenson and Alexis Hart.

UNC led by five (18-13) in Set 4 before Minnesota made a comeback with an 11-4 run. Samedy downed four straight kills and Lauren Barnes added an ace to cap the rally and put the Gophers up 24-22. A kill by Bell prolonged the match momentarily, before Samedy tacked on her final putdown for the 25-23 win.