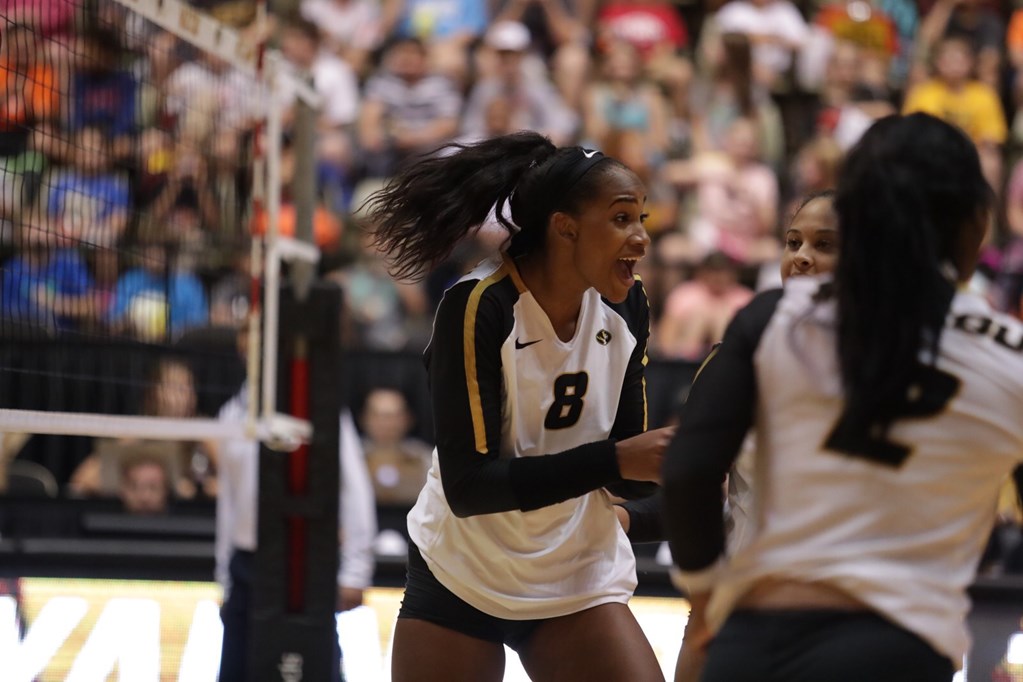 Alyssa Munlyn (above) had 5 blocks for Missouri and Kylie Deberg had a career-high 21 kills as the Tigers won their 5th match in their last 9 tries versus Florida. Archive Photo via Zach Bland/Mizzou Athletics

The last time Missouri and Florida faced off, on November 25th, 2017, Missouri won the first set 25-23, and the Gators then rolled to a 3-1 win. Early on in Sunday’s rematch, it looked as though that pattern might be repeating, after Missouri won set 1 25-23, and then Florida dominated set 2 25-16.

But Missouri is outpacing expectations this year, and they did the same in this match. They rebounded to win the 3rd set rather easily, were pummeled by the 4th (with 7 kills, but 11 errors), and then battled past the Gators in the tie-breaker in spite of being out-hit and out-blocked in the frame.

Florida had a monstrous 23.5-block performance, which ties for the 2nd-best team blocking performance in Division I volleyball this season. The 45 block assists is Florida’s school record in the rally-scoring era, as are their 23.5 team blocks. Both broke the records of 40 and 23, respectively, set earlier in the weekend against Ole Miss. Their previous best was just 38 assists against Tennessee, twice, in 2004; they had 21 total blocks in each of those matches. Sunday’s effort also breaks the all-time school record for block assists, which was 40 set against Georgia in 1997.

“I’m very proud of our kids today,” said Missouri head coach Wayne Kreklow. “It was a very tough match and there were many highs and lows that we had to struggle through. I thought we showed a lot of maturity today. We have a long way to go, but we’re making progress and if we continue to work hard and buy into the daily grind then we have potential to be good.”

That snapped a 14-match Florida winning streak, and marked a 6th-straight win for Missouri. It was also the Gators’ first SEC loss of the season, dropping them behind 8-0 Kentucky for 2nd in the SEC (Missouri is now in 3rd place).