Marquette Rallies Past Northern Iowa in 4 in Non-Conference Tilt 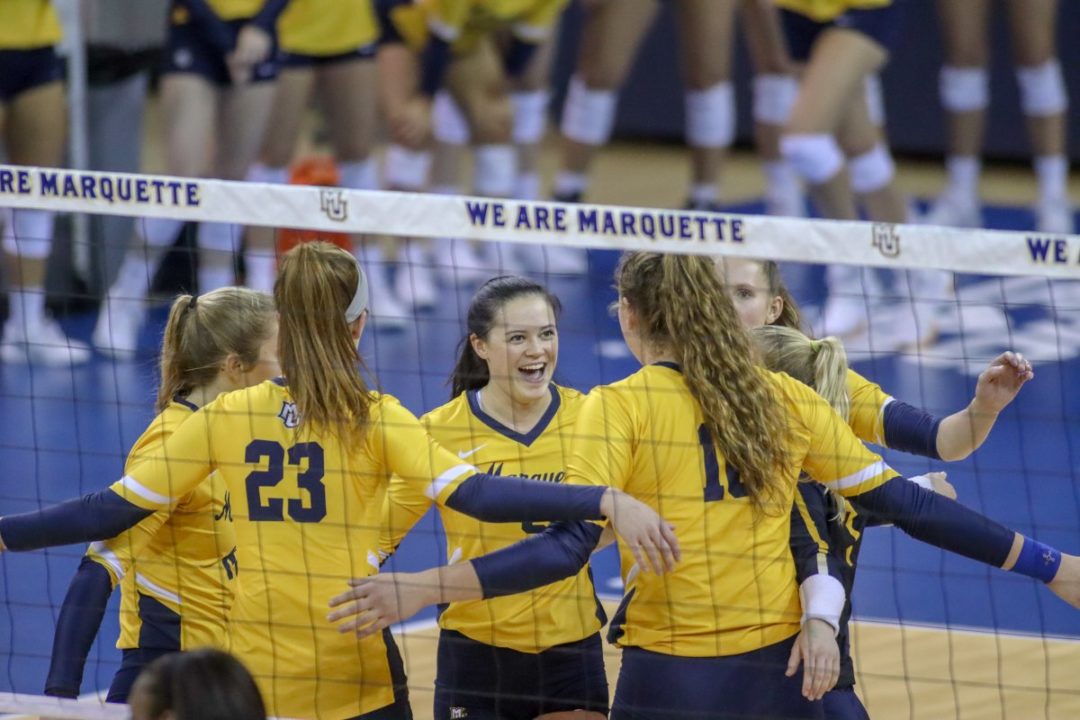 Marquette outdid Northern Iowa in every facet of the game, snapping the Panthers' 10-match win streak with a four-set comeback win.  Current Photo via Marquette Athletics

Marquette outdid Northern Iowa in every facet of the game, snapping the Panthers’ 10-match win streak with a four-set comeback win.

UNI outhit Marquette .200 to .176 in Set 4, but could not pull off the win, falling 26-24. The teams tied 12 times in the stanza. The Golden Eagles led 16-15 midway through, before Kate Busswitz managed a kill and two blocks to put the Panthers up 18-16. UNI led 23-21 after a Karlie Taylor kill, but Marquette leveled the score with kills by Jenna Rosenthal and Madeline Mosher. The home team called timeout and earned a set-point try at 24-23 with a Piper Thomas putaway. The Eagles countered with kills by Mosher and Hope Werch and got help from a bad set to steal away the 26-24 win and end the night.

For the match, it was Allie Barber that led Marquette with 19 kills on a .357 hitting effort. Anna Haak added 10 putaways and 14 digs, but hit -.024. Rosenthal was next on the team with nine kills, while hitting .292 and putting up a team-leading six blocks.

Taylor notched 20 kills and 17 digs for UNI, but it was not enough. Thomas (13) and Jaydlin Seehase (9) followed. Rachel Koop was the lone Panther to hit better than .200, notching three kills in seven swings, while also posting a 44-assist, 11-dig double-double.

Marquette led 14-12 in Set 1 before succumbing to a 13-6 UNI run. Six Golden Eagle errors, three Thomas kills and two by Taylor put the Panthers up 23-19. A Busswitz putaway and Haak hitting error ended the set at 25-20.

UNI carried the momentum into Set 2, racing out to a 7-1 lead with help from three Marquette errors and two Taylor kills. The Golden Eagles chipped away and knotted the score at 13, capping a 3-0 run with a stuff by Barber and Elizabeth Orf. Northern Iowa called timeout and iced the server, but Marquette scored six in a row after that, four on Panther hitting errors to vault ahead 19-14. UNI never recovered, despite stopping Marquette’s first set-point try at 24-19. A block by Orf and Mosher leveled the match.

The momentum was firmly in Marquette’s court in Set 3 as the team built a 16-9 lead midway through the stanza. Barber downed four kills and added a block, while UNI gave away three points on errors. A Haak kill and a Panther error made it a nine-point game at 22-13. UNI scored three of the next four, but an Orf putaway and a block by Rosenthal and Werch closed out a 25-16 win.

Next up, both teams return to conference action with Marquette heading to Creighton on Friday and UNI playing host to Valparaiso on Friday.