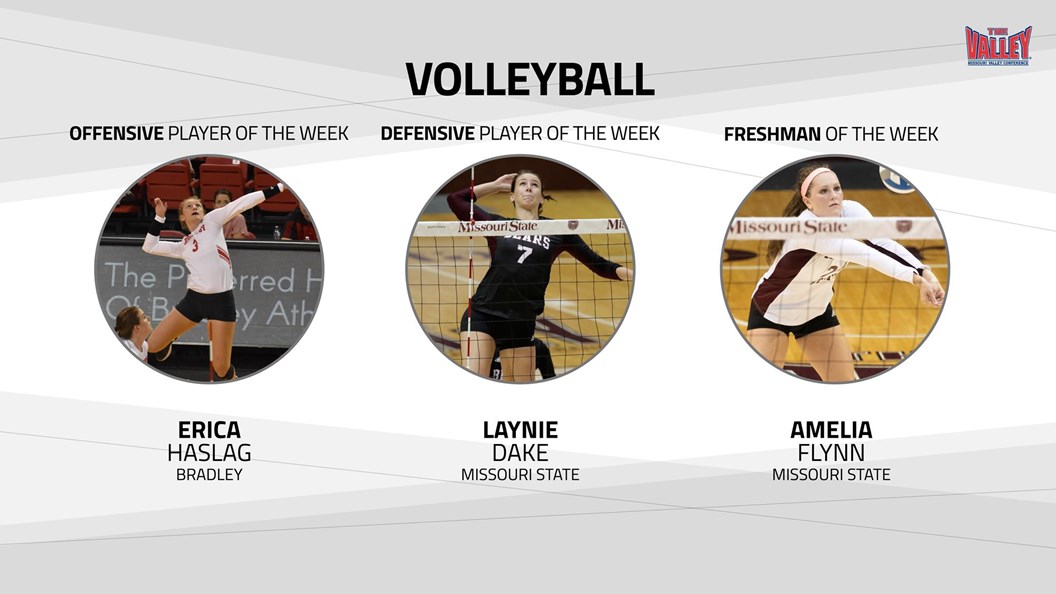 Erica Haslag, Sr., OH, Bradley
Bradley senior Erica Haslag was named MVP of the 2018 CEFCU Classic after helping Bradley to a 3-0 record and tournament title as the Braves improved to 10-2 on the year to match the best start through 12 matches in program history.  Haslag averaged 4.18 kills and 0.64 blocks per set while hitting .306 in the three victories.  She opened the week with six kills in a sweep of in-state foe Eastern Illinois.  In a five-set victory over Omaha, Haslag hit .431 and notched a season-best 27 kills in addition to collecting three blocks as she recorded her 1,300th career kill.  She capped the week with a match-high 13 kills and four blocks in a sweep of Milwaukee.

Senior outside hitter Erica Haslag has been named @MVCsports Player of the Week after averaging 4.18 kills and hitting .306 to earn MVP honors of the CEFCU Classic as she helped @BRADLEYvolley to the title.

Laynie Dake, So., MB, Missouri State
Missouri State sophomore Laynie Dake piled up 14 blocks in three matches, averaging 1.56 per set and posting a career-high six stuffs in back-to-back sweeps of New Mexico and Central Michigan. Dake’s 12 total blocks helped the Bears sweep UNM and CMU with dominating defensive efforts, holding their two Friday opponents to a combined .045 attack efficiency, including a .000 mark over the day’s final five sets. Dake added two blocks Saturday against No. 4 Nebraska, and posted 16 kills, two assists, two aces and two digs on the weekend as well on the way to all-tournament honors at the Husker Invite.

Amelia Flynn, Fr., OH, Missouri State
Missouri State’s Amelia Flynn led the Bears in kills and ranked second in digs at the Husker Invite, averaging 2.78 kills, 2.67 digs and 0.56 blocks per set in MSU’s runner-up finish. Flynn shared the team kills lead in each match, with eight against New Mexico, 11 versus Central Michigan at six at No. 4 Nebraska. She also tallied 15 digs, three blocks and an ace in the sweep of UNM, and nine digs and two blocks in the weekend’s other two matches.

After helping the #MSUBears to a runner-up finish at the Husker Invite, Laynie Dake and Amelia Flynn picked up #MVCVB weekly honors.