Brazil Back on Track after Win over Canada (Pool B) 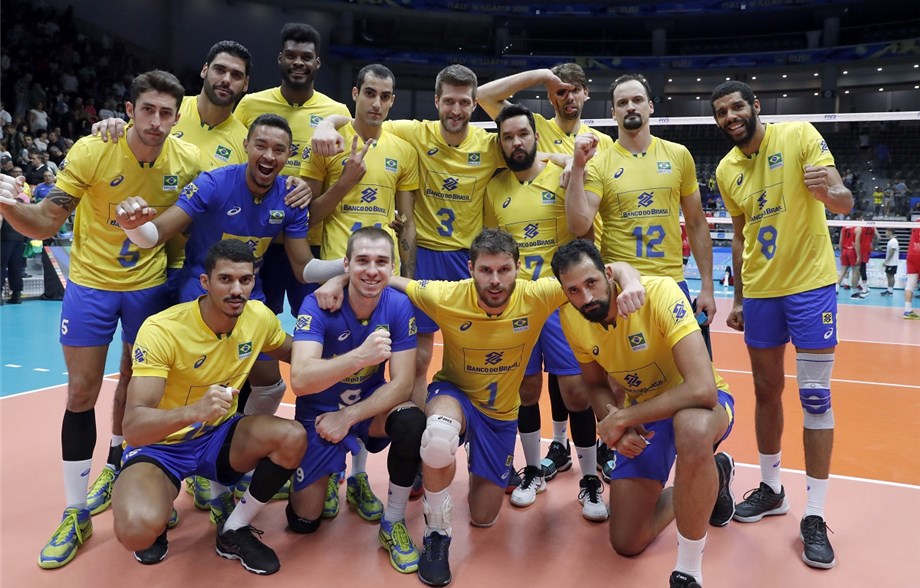 After an off-day to regroup, Brazil gave Canada their first loss on Monday, while the Netherlands beat Egypt. Current Photo via FIVB

After the rumble caused over the last 2 days by the Netherlands at the FIVB Men’s Volleyball World Championships, where they beat Brazil (for the first time since 1966) and France (for the first time since 2000) in succesive days, Monday’s 6th day of competition was relatively calm and quiet. The Dutch men avoided a letdown match by knocking off Egypt 3-1, which secures their spot as a top-3 seed in the group, while Brazil gave Canada its first loss of pool play.

With the Netherlands now done playing, and the first team to 4 wins, the final pool standings will all shake out on Tuesday (though the 4 qualified teams are set, just the order is to be decided). For the Dutch to win the pool, a Brazil and Canada loss would do the trick; a Brazilian 5-set win over China and a Canadian loss to France would also lock in the top of the table. The Dutch will lose all tie-breakers beyond “points” to both Canada and Brazil, though.

Dutch coach Gido Vermeulen continues to use a number of different lineups and substitutions as the team rolls its way through preliminary play at the World Championships. On Monday, after the team dropped its 3rd set, he made 4 substitutions for the 4th, where the reserves were able to hammer-away the result. 13 of the team’s 14 player roster are listed as having seen time in the match, with opposite Wouter ter Maat one of just 2 players who went the duration – resulting in 26 points on 20/38 hitting (52.6%), adding 4 blocks and 2 aces to his tally.

“We played a good match!” ter Maat said afterward. “We started well, not with the energy we had against Brazil and France, because we knew already that we are in the next round, but still. We picked it up quite well, we defeated them and only in the third set we did not play well. In the end we came too close, but I made a mistake and we lost the set. In the next one we started as we can and we won the match. I don’t know what to expect from the second round. We will see who will be our opponents. We just need to prepare as good as is possible and we will see what will happen. I will remember Ruse with good for sure! All the fans were jumping when we made a block or an ace, it was crazy and really nice!”

The coach explained his substitution strategy as an attempt to save some of his players after 4 days of play in a row:

“It was very difficult for us today because we played four days in a row,” Vermeulen said. “You never do that in a tournament, never. Usually three matches in a row is the maximum. We put in the fresh guys who did not play a lot. They played two sets very good and in the third set this players also were at their power end. I was very happy that in the fourth set my boys managed to finish the job. Ter Maat did an incredible job at serve, so we got some air and we were able to finish the game in the best way possible. I do not know what to expect from the next round, we have to wait the results now and to see where we have to go. Now we will have some good rest. Our rest day is tomorrow, so we have one more day to recover which is good for us.

Egypt’s coach Mohamed Moselhy Ibrahim blamed his team’s performance after the match on both the team’s fatigue after an emotional 3-1 win over China a day earlier, and on the fact that the team was still mathematically eliminated from the competition.

“I am very satisfied with the way my team performed here,” Ibrahim said. “If we have the opportunity to play yearly about 30 matches at the same level, I think we would have very good results.”

As a side note, Vermeulen lauded the hall in Ruse in his post-match comments: in sharp contrast to what Brazilian coach Renan Dal Zotto and some of its players said about troubles with air conditioning and cross breezes in the arena last week.

I also want to mention that the hall here in Ruse is beautiful. The first day we stepped in we thought that we can play a good volleyball here. The atmosphere is really good, so we were really happy to be in Ruse.”

Video highlights of the match:

After a day off on Sunday for Brazil, following their loss at the hands of the Netherlands on Saturday, they settled back in and got back on the scoreboard by handing Canada its first loss of the tournament on Monday.  The difference-maker was Wallace de Souza, who after hitting just 41% against the Dutch was able to land 21 kills and 24 total points (55.2% hitting) to lead all players in scoring in the match. Douglas followed with 15 of his own.

“It was a tough match,” Brazilian captain Bruninho said. “We knew that the Canadian team was playing really well and have a great defensive system. It was really difficult to play against them but we had patience during the whole match. We managed not to close the ball in their block, to work better in attack than we did in our last game. It was really difficult for us mentally as well, because this match was like a final. The important thing is that everybody managed to stay concentrated and I am really proud with the guys. I think we made a great job. Now we just have to put our focus into the next match tomorrow against China. It will be difficult, it is never easy. We must be 110% focused.”

The Canadian block was the story of the match on their side: they out-blocked Brazil 9-3, in spite of the loss. That included 3 from Sharone Vernon, who was Canada’s best player in the match – he also had 13 kills, and hit 65% overall.

Gord Perrin, the Canadian captain, led the VolleyLeafs in scoring with 18 points, but he needed 38 swings to get there.

The difference for Canada in this match was their serve, which was strong in their first 3 matches, but suffered on Monday.

“Despite the loss, I think it was a good match for us,” said Canadian head coach Stephane Antiga. “My guys played really well. We knew that we are able to play like that against such a strong opponent as is Brazil. We controlled pretty well our side-out, but our serve did not work today. I think that this aspect of the game had a key role in the match and was the main reason for this outcome.”

Canada had just 3 aces in the match, and  Brazil didn’t have many problems in reception.