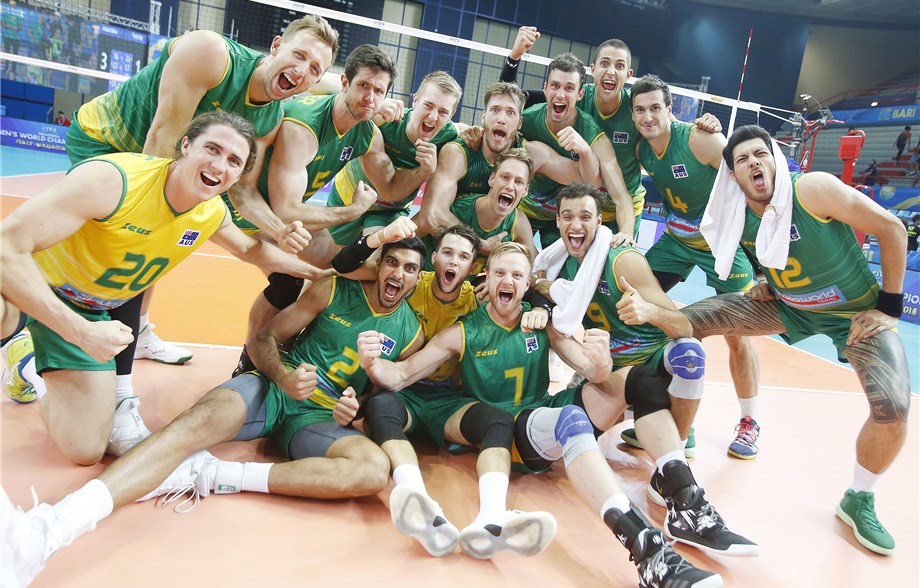 Australia cemented its spot among the top four in Pool C and punched its ticket to the second round of World Championships play, riding the arm of Lincoln Williams to a four-set win over Tunisia. Meanwhile, Russia cruised past Cameroon to set up its Pool C finale against Serbia.  Current Photo via FIVB

“Despite some slight difficulties in a very close second set, we dominated throughout the match,” Russian coach Sergey Shliapnikov said. “I am satisfied with the result we earned on the court. Now, we need to remain focused while preparing for the match against Serbia. It will be a tough challenge but essential to our participation in this championship.”

It took just an hour and 24 minutes for Russia to dispatch reigning African champions Cameroon and eliminate the team from contention in the World Championships.

Three Russian players notched double-digit scoring efforts led by Victor Poletaev (13). Dmitry Volkov and Maxim Mikhailov chipped in 10 points apiece. Poletaev notched a team-best 11 kills, a block and an ace after coming in as a substitute in Set 2 and starting Set 3. Volkov downed seven kills and added two aces and a block. Mikhailov accounted for nine of his points in the opening stanza and added one more in the second before exiting the match.

Yvan Kody was the top scorer for Cameroon with 11 points, all on kills, including nine in Set 2. Sem Dolegombai added nine points in the match with seven kills, a block and an ace. David Feughouo chipped in nine points on eight kills and a block. Bana Hassana put up a team-best two blocks. Cameroon was still without captain Nathan Wounembaina, who was injured, moving Feughouo to outside hitter.

Russia swapped out three of its starters: Dmitry Muserskiy, Volkov and Mikhailov in Set 2, putting in Ilyas Kurkaev, Yury Berezhko and Poletaev. The changes didn’t affect the team, however, as Russia built a 16-12 lead in Set 2, but Kody pulled Cameroon back into it before falling 30-28. Russia finished off the win with at 25-15 effort.

Lincoln Williams racked up a match-high 24 points, with 17 kills, five aces and two blocks to guide the Volleyroos to the second round.

“We caught a slow start in this match, this round requires a strong focus that may be exhausting,” Williams said. “The second set saw us regrouping to rule the game and gaining three deserved points meaning the access to the second stage of the tournament. We are satisfied with the result we achieved so far. Regardless of our young age, we managed to meet challenging top-level opponents like Russia and the United States head on. We look forward to starting the second round while facing the strongest teams of this Championship.”

Joining Williams in double-digits for the Aussies were Beau Graham and Luke Smith with 13 points apiece. Smith turned in 12 kills and a block over the final three stanzas, while Graham added 11 putaways and two aces.

After struggling to find its footing and dropping the opening set 25-16, Australia righted the ship in Set 2. The Volleyroos pulled away 16-12 at the second technical timeout and carried on to the 25-17 win. After a 25-19 win in Set 3, the Aussies blazed through the final stanza behind Williams for a 25-16 victory, which punched their ticket to the next round.