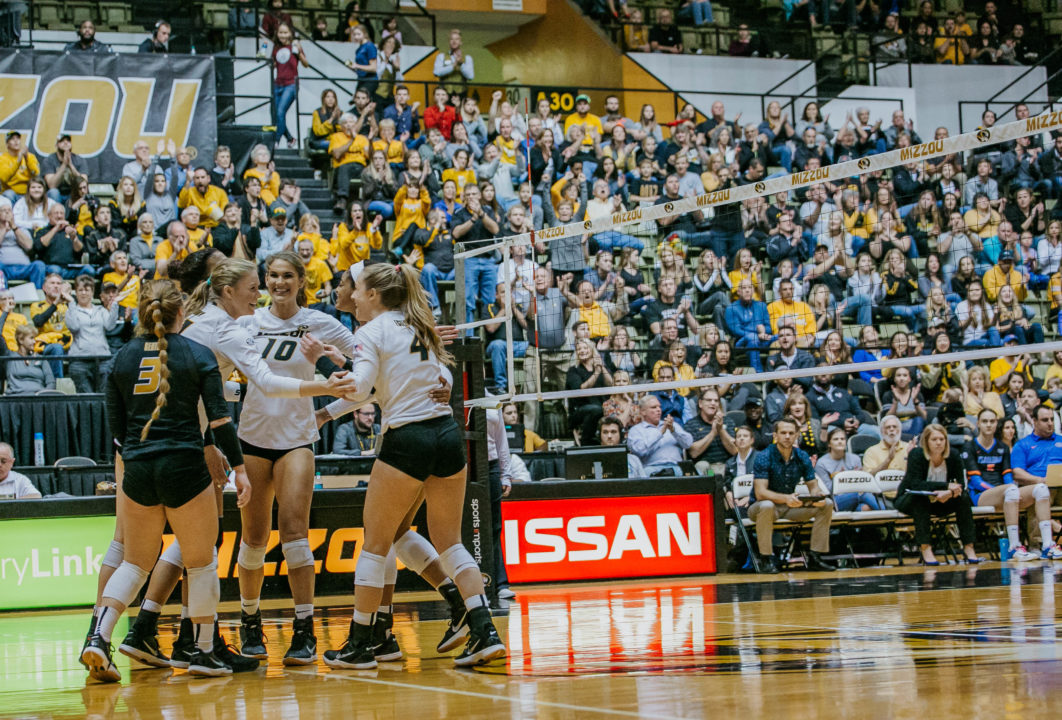 After falling to Kansas in the 2015 NCAA Tournament, Missouri got some revenge in this rendition of the Border War with a five-set victory. The win comes as an upset as Kansas was ranked 20th in our VolleyMob Top 25 and featured so many legendary seniors for the program. Only one can advance though, as the Tigers had what it takes to keep the season alive and reach the second round.

Kansas had a slight lead late in the first, but Missouri netted the final three in the opener on the Jayhawks seventh attack error in the inaugural set. Things were just as tight midway through the second, but a 12-4 run to end it gave Kansas the set and a 1-1 tie headed into the third.

With a loaded senior class featuring Ainise Havili (46 assists, nine digs, five kills) Kelsie Payne (10 kills, seven digs, four blocks), Madison Rigdon (15 kills, 12 digs, three blocks, two aces) and company not wanting to play their final match, Kansas responded in the fourth. They would go on to win it 25-20 and force a fifth as they looked for one more comeback in their careers.

However, the Tigers defense continued to stifle Payne (.116) and her teammates as Kansas hit just .185 to Missouri’s .242. In a match that featured plenty of attack errors, Kansas had three in the first seven points that gave Missouri a 6-1 advantage. From there, Missouri stayed in front as one last Kansas attack error (25 in the match) put the final nail in the coffin.

Kansas had more aces (4-3) on less serve errors (6-8) and more blocks (10-7), but Missouri had more digs (72-67) and made less mistakes. The difference is that Kansas record-breaking senior class goes home unhappy while Missouri moves on to round two tomorrow.

The second match at the Charles Koch Arena wasn’t nearly as exciting, nor was it a rivalry. Still, the hometown fans got to see exactly what they could have hoped for as Wichita State controlled Radford in a three-set sweep.

In total, there were just six ties and two lead changes for the entirety of the match, as Wichita State hit an electric .440 compared to Radford’s .182 mark.

It wasn’t all tough going for the Radford offense, as Maddie Palmer (15 kills, .278, eight digs) kept things afloat. However, Wichita State did a strong job on the rest of her teammates and logged 17 more team digs (47-30). Wichita State libero Giorgia Civita (15 digs) was solid both in that regard and in serve reception where Wichita State was strong.

Next up, Wichita State looks to further take advantage of their first hosting opportunity as they host cross-state opponent Missouri in the second round.