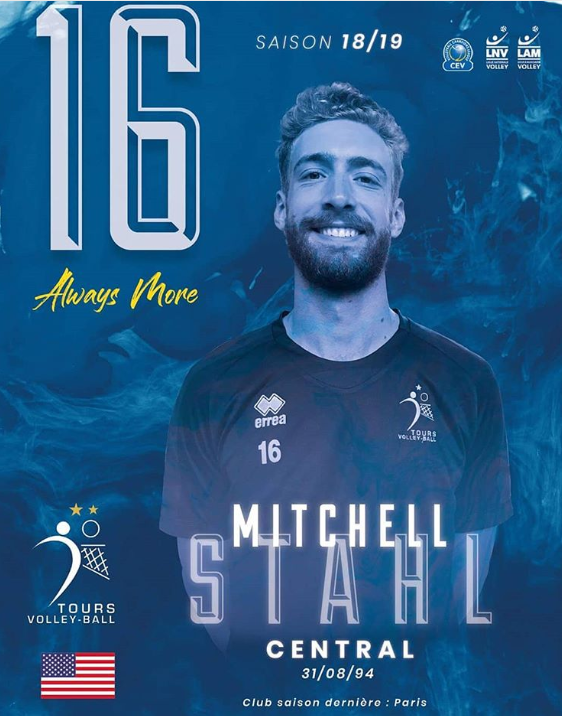 Mitch Stahl is making the move to the Tours VB, the French champions in 2018.  Current Photo via Tours VB

Mitch Stahl experienced an eventful rookie season with Paris Volley. Much of that excitement was due to the uncertainly of his club, and that probably led him to join Scott Kevorken at Tours VB. Stahl was the starting middle blocker on a team that finished the regular season in third position before reaching the semifinals of the playoffs. They lost 2-0 to Chaumont 52 VB in a best-of-three semifinals series.

Much of the excitement in the spring of 2018 was tied to financial problems with the club. “Financial oddities” found during an audit first they were ruled out of the playoffs. They French Commission denied their appeal, but a second round of appeals caused the delay of the French Ligue A playoffs. After the playoffs concluded, the National Directorate of Support and Management Control (DNACG) decided that Paris Volley would be relegated to Ligue B for the 2018-2019 season. The club’s appeal to the DNACG was not successful.

Prior to his rookie season at Paris Volley, Stahl played his collegiate volleyball at UCLA. He was named Second-Team AVCA All-American as a senior and Honorable Mention AVCA All-American as a junior. Stahl was also First-Team All-MPSF as a senior and Second-Team All-MPSF as a junior. He finished his career at number 3 on the list of most aces in a career at UCLA and number 2 in blocks assists and total blocks.