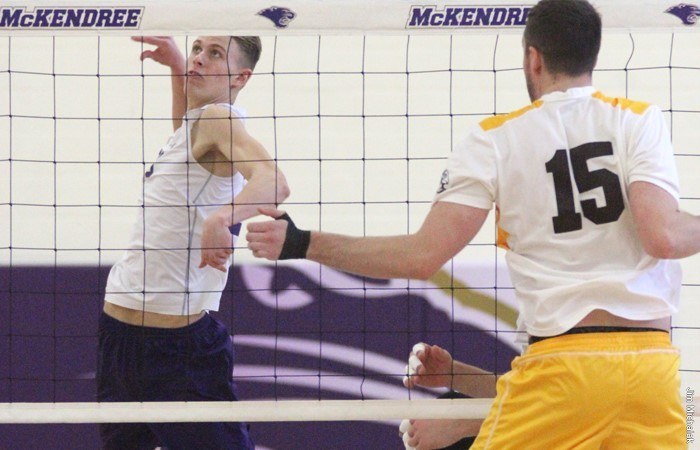 Monday had a singular MIVA match on tap, with McKendree downing Quincy at home in four sets. St. Andrews, an NAIA program, earned its first-ever win over an NCAA Division II foe by defeating Coker, also in four sets.

Stat Leaders: McKendree was led offensively by four players in double digits. The head Bearcat was Patrick Ross with 15 kills on .480 hitting. He was joined in double digits by Nolan Rueter with 13, Jared Wilcox with 10, and Brendan Schmidt who had 10 kills on 17 errorless swings for a .588 hitting percentage. Schmidt also led the defense at the net with a team-high of 5 blocks. Wilcox had a double-double by digging a match-high 15 balls on the night. Setter Zach Schnittker had the only other double-double of the match, dishing out 43 assists to go with his 10 digs on defense.

For Quincy, who remains winless in MIVA play, Anthony Winter led all attackers with 16 kills on the night. No other Hawk had more than 8. Setter Thane Fanfulik distributed 39 assists in the attack and narrowly missed a double-double with 9 digs. At the net, Blake Sprecher had a match-high 7 blocks. Libero Collin Merk dug 12 balls.

It Was All Over When: Hanging on to an 18-17 lead in the fourth set, the Bearcats earned some separation with two Patrick Ross kills. A QU time out did not slow things, and a Hawk hitting error all but sealed the deal. The two teams traded side-outs for the remainder of the match.

Stat Leaders: SAU was led offensively by Edgar Huerta with 15 kills on .364 hitting with 3 blocks. Robin Imar added 12 kills to go with his team-high 8 digs and a match-high-tying 3 aces. Rounding out the double-digit kill party for the Knights was Diego Hernandez with 10. Hernandez also added 3 aces to lead the match. Setter Jackson Stark dished out 40 assists. Middle blocker Nate Blackwell had 9 kills on .471 hitting to lead all attackers in hitting percentage. He also led the match in blocks with 7.

Coker has their big three as well. Joao Victor Santos led all attackers with 16 kills on the night. He also led the Cobras at the net with 4 blocks. Joining Santos in double-digits were Gabriel Castro with 13 on .333 hitting and Stephen Porras with 12, hitting .308. Setter Aleksa Bijelic finished with 40 assists to direct the attack. Gary Baker led all defenders with 13 digs.

It Was All Over When: As the match wore on, Coker, playing with only 6 rostered players, began to tire. The Cobras had their offense clicking (14-4-25, .400), but were unable to put up a fight defensively, as SAU produced a stat line of 14-1-26 for a hitting percentage of .500 on the night. Playing with no libero and having no ability in stopping the Knight attack, it was only a matter of time before St. Andrews earned their first-ever NCAA Division I/II victory.