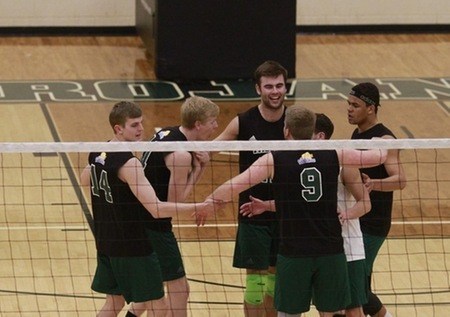 After falling behind 2-1, the University of Mount Olive men’s volleyball team rallied to defeat Lincoln Memorial University, 3-2, in a non-conference match in Mars Gym in Harrogate, Tennessee.

Mount Olive returns to Kornegay Arena for a pair of Conference Carolinas matches this weekend, starting with a 7 p.m. matchup with Belmont Abbey College on Friday, March 3 before facing Pfeiffer University at 2 p.m. on Saturday, March 4.

Riblett, who entered Sunday’s showdown against the Trojans with the four highest kill outputs in the Lincoln Memorial University men’s volleyball program’s single-match history, tallied 26 kills on 53 attempts for a .340 attack percentage, smashing the previous record of 18. It also represents the eighth-most kills by any player in a five-set match in the nation this season.

The Railsplitters finished with 62 kills compared to 58 for Mount Olive, but Lincoln Memorial gave away nearly an entire set with 20 service errors. By contrast, the Trojans had just nine service miscues. LMU also had 28 attack errors, but that mark was nearly even with Mount Olive, who finished with 24.

The Trojans never trailed in the opening set and raced out to a 10-4 lead on an Iskandar service error. The Railsplitters controlled the next passage of play and cut the deficit to 12-10 on a Mount Olive miscue, but the Trojans quickly pushed the lead back to 18-13 on a kill by Yasalonis. Lincoln Memorial won four of the next five rallies to pull within two, but that’s as close as it would get. UMO finished off the 25-22 win with a kill by Monaghan.

The back-and-forth second set featured 13 ties and seven lead changes, but a late 7-2 spurt put the Trojans in front 24-19. However, the Railsplitters rode Triana’s serve to end the set on a 7-0 run and stun Mount Olive 26-24. The Trojans had three attack errors over that span, which drew the match even at 1-1, while Iskandar, Riblett and Carvalho had kills.

The Railsplitters carried that momentum into the third set and used a 4-0 flurry to take a 13-8 lead. Lincoln Memorial maintained at worst a two-point cushion down the closing stretch until kills by Hollevoet and Rutledge closed the gap to 23-22. However, an attack error and a kill by Riblett clinched LMU’s 25-23 win.

An early 5-2 run gave the Trojans an 8-5 advantage in the fourth frame, and the Mount Olive lead hovered in that vicinity for most of the set. Lincoln Memorial trailed 15-11, but used a 6-2 spurt capped by a Riblett ace to tie it up at 17-17. However, UMO won three of the next four rallies to pull ahead 20-18. The Railsplitters could never tie it up again after that, while three straight kills by Palmatier sent the match to a decisive fifth set.

The Railsplitters trailed by a narrow 7-5 margin in the fifth set after a kill from Riblett and a Mount Olive attack error, but the Trojans won the next four rallies to build a commanding 11-5 advantage. Lincoln Memorial scratched and clawed from there, but a kill by Rutledge ended it 15-11 in favor of the Trojans.

It marked just the second loss for Lincoln Memorial on its home court and snapped a three-match winning streak at Mary Mars. It was also the fifth five-set match played at Mars Gym this season.

The Railsplitters wrap up their six-match home stand on Tuesday when they welcome Bluefield to Mary Mars Gymnasium for a 7 p.m. start.