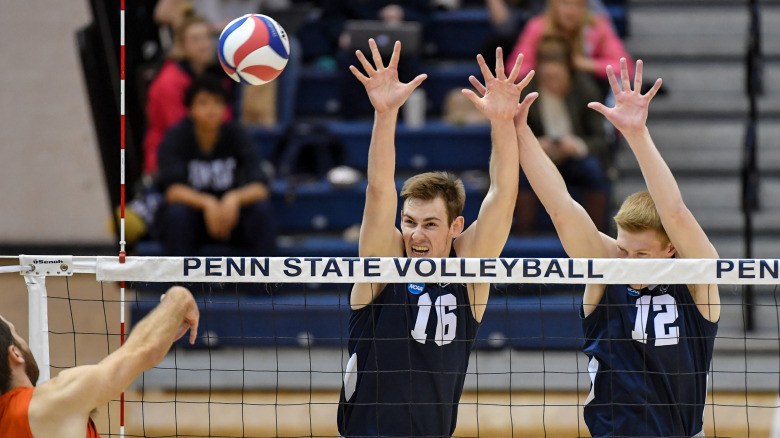 The Penn State men are 1 win away from locking up at least a share of the EIVA regular season title. Archive Photo via Mark Selders/Penn State Athletics

Regular season conference titles have been awarded in both the MPSF and MIVA, and those teams now just await this week’s start of their respective conference tournaments (MPSF bracket here, MIVA bracket here).

The Long Beach State men are the MPSF conference champions after their win over #14 CSUN on Saturday, and will take the top seed into next week’s tournament. Meanwhile, in the MIVA, Ohio State has been long-clinched as the champions of the conference, going 16-0 this year to become just the 2nd team in 25 years to go undefeated in the MIVA regular season (Loyola went 14-0 in 2014 en route to the national title).

The other two men’s Division I-II conferences, however, are much more up-in-the-air still.

In the EIVA, Penn State is 1 game ahead of St. Francis at the top of the table. The two teams have the same two opponents for their last two games, Charleston and George Mason, and both Penn State and Saint Francis finish their seasons at home. With Charleston winless so far in the EIVA this season, Saint Francis’ best chance is if George Mason (who has been ranked this season) can upset Penn State – which would result in a regular season tie for the title. Penn State then would get the #1 tournament seed thanks to a better overall record.

Princeton took a 1-game lead over ‘the field’ for the last two spots in the 4-team tournament thanks to a weekend win over George Mason. But, with Harvard and Sacred Heart still left to play, they’re not safe yet. NJIT, Sacred Heart, George Mason, and Harvard all have matching 6-6 records.

Meanwhile, in the Conference Carolinas, with one game remaining, King and Barton wit with identical 15-2 records. King’s final game on Tuesday is against North Greenville, who are just 8-17 overall this season, while Barton has to play 3rd-ranked Mount Olive in their final game – a much more treacherous undertaking. If King wins, they receive at least a share of the regular-season title. If King loses, then Barton could get the title outright by beating Mount Olive. If both King and Barton lose, then Mount Olive joins them as three-way co-champions.

Courtesy EIVA. 2 Round of Games Remaining