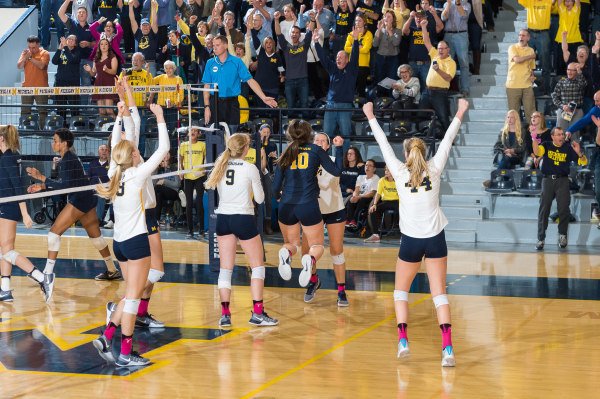 The Big Ten announced on Tuesday the 28 honorees named Outstanding Sportsmanship Award winners for the 2016-17 academic year. Joe Cox of the hockey team and Allyssah Fitterer of the volleyball team were selected as Michigan State’s honorees.

Cox (Chelsea, Mich.), who served as captain as a senior, was the winner of four team honors this past season, garnering the Bill Burgess Outstanding Senior, Spartan Shield, Amo Bessone and Blue Line Club President’s Awards. For the fourth consecutive season, he appeared in every game for the Spartans and garnered Academic All-Big Ten honors for the third straight year.

Fitterer (Georgetown, Ontario) is a three-time Honorable Mention AVCA All-North Region selection, and also twice earned Academic All-Big Ten honors. Three times in her career she was a recipient of a team award, earning the Extra Mile Award as a senior. She helped her team to four consecutive NCAA Tournament bids, including a 2013 Sweet Sixteen appearance and hosting the first and second rounds in 2016. As a senior, she led the Spartans with a .361 hitting percentage, which was sixth in the Big Ten and 45th nationally; it also ranked sixth all-time in the MSU single-season annals. These standouts were chosen from a group of more than 350 students honored throughout the academic year who had displayed positive sportsmanship.
All of the 2017 Big Ten Outstanding Sportsmanship Award winners are available at:  http://www.bigten.org/genrel/060717aaa.html