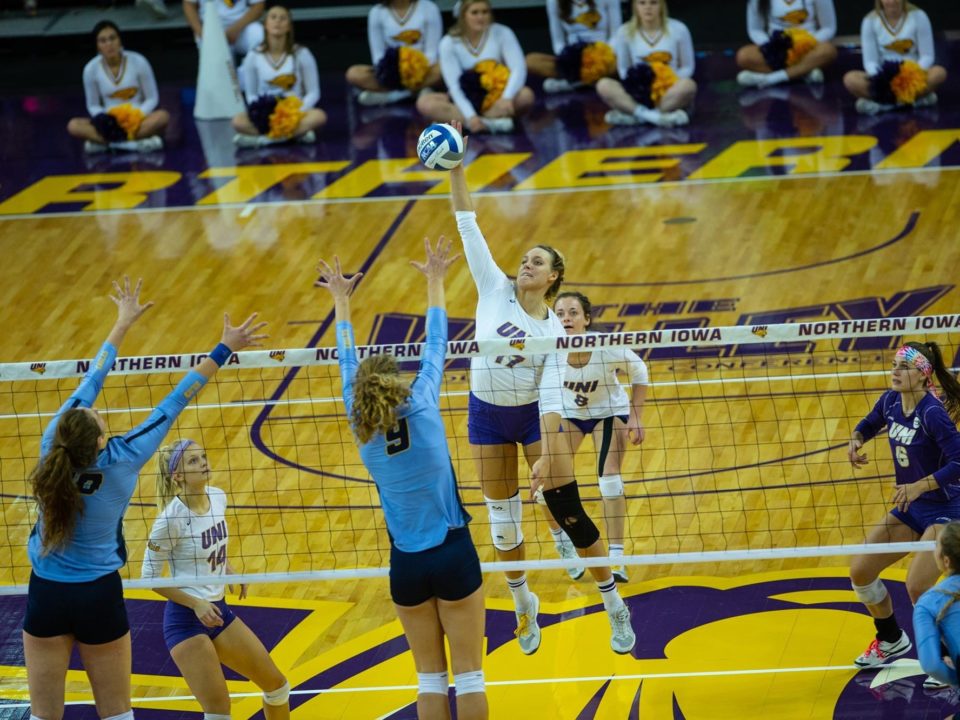 The UNI Panthers (12-0 MVC) are slated for a big week of Missouri Valley Conference play, taking on the league’s #2 and #3 teams in Illinois State and Bradley. Current Photo via Northern Iowa Athletics

• The Panthers are slated for a big week of MVC play, taking on the MVC’s #2 and #3 teams in Illinois State and Bradley.

• Within MVC-only action, Karlie Taylor paces all individuals with 4.86 kills per set and leads the league in points per set with 5.39.

• UNI is ranked 15th nationally in the NCAA’s RPI release from October 29. The Panthers are also ranked in the AVCA Top 25, with 86 votes the Panthers are tied at 25th.

• This is the 29th consecutive season that at least 10 Iowa natives are on the UNI roster including the second year in a row that 14 of the 15 Panthers are from Iowa. Each of UNI’s last 8,785 points played dating back through last season have been played with only Iowans on the court.

• Head coach Bobbi Petersen is in her 19th year at the helm of the Panther program with a record of 475-147. She has led the Panthers to 13 NCAA Tournament appearances.

Live radio coverage of the UNI Panther volleyball team can be found on www.UNIPanthers.com and KXEL (1540-AM) with Chris Kleinhans-Schulz on the call.  All audio this year will be free of charge (no subscription service).

Illinois State has put themselves solidly in second place in the conference with their only loss being to the Panthers. The Redbirds rank second in hitting percentage, assists, kills, and digs while ranked third in service aces in the conference. Courtney Pence leads the MVC in digs per set with 6.22 while Ali Line comes in at the #2 spot in attack percentage with a .364 mark. UNI and Illinois State are the only teams with two players in the top ten in hitting percentage.