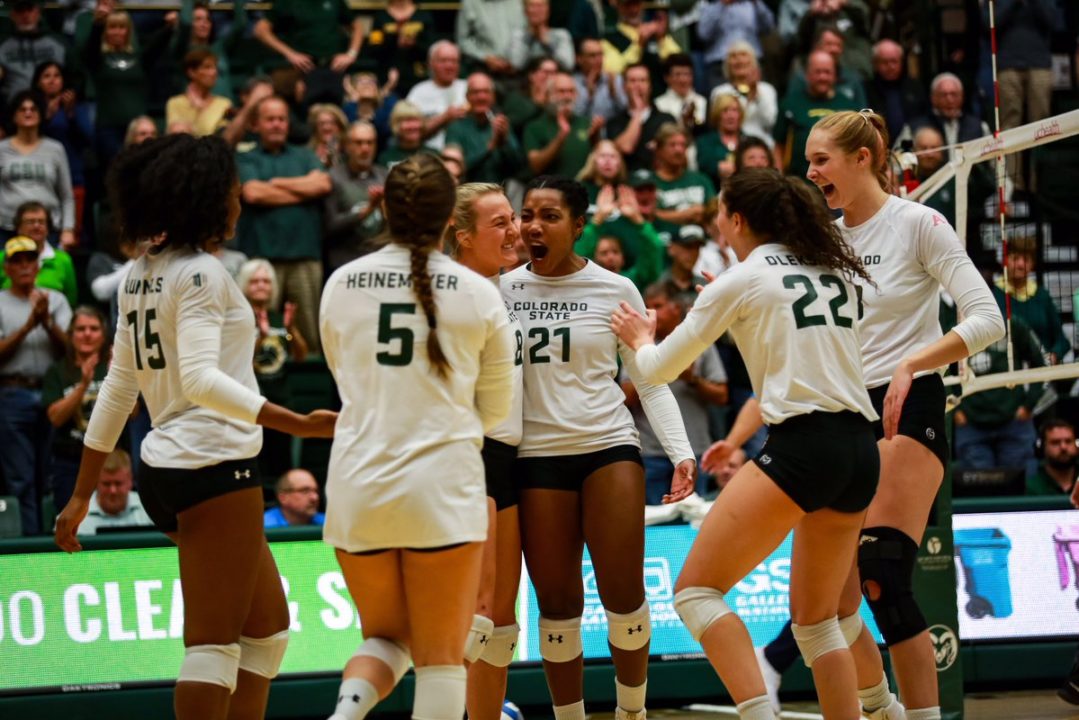 The Colorado State volleyball team extended its winning streak to eight consecutive matches with a 3-1 victory over Wyoming in a Border War battle on Tuesday night. Current Photo via Colorado State Athletics

FORT COLLINS, Colo. – The Colorado State volleyball team extended its winning streak to eight consecutive matches with a 3-1 victory over Wyoming in a Border War battle on Tuesday night with 2,415 of CSU faithful in attendance.

We extended our winning streak to eight matches with a 3-1 Border War victory tonight. #PointRams

The Rams used massive scoring runs in the first set as Wyoming led 8-5 before CSU flipped a switch. Katie Oleksak led Colorado State from the service line to score 11-consecutive points to take a 16-8 advantage in the set. The Rams led the rest of the way, despite the Cowgirls stringing together a six-point scoring run late to get within three at 23-20.

Colorado State kept its momentum going into the second set, starting on a 5-0 tear to force Wyoming to use a timeout. The Cowgirls cut the score to two at 8-6, but the Rams kept the lead through the heart of the frame and again extended their advantage to 17-11 after scoring four-consecutive points. Wyoming came within four at 20-16, but the Rams took care of business and took a 2-0 match lead.

After the break, Wyoming’s offense was charged as it hit a match-high .545 in the third set. The Cowgirls took a 6-2 lead and extended it to 16-7 on its way to avoiding the sweep.

In the fourth set, the Rams charged out to a 13-5 lead before Wyoming’s serving game took it to Colorado State. The Cowgirls manufactured a seven point scoring run – four via ace – to cut the Rams’ lead to one at 13-12. Colorado State tried to hold its lead, but Wyoming again put together a five-point run to take a 19-16 advantage. CSU didn’t give up as it worked its way back scoring in runs to first tie the frame at 20-20 before scoring five of the last seven points to earn the Border War victory. Colorado State trailed 19-16 before scoring the last nine of 12 points in the match.

QUOTES
Coach Tom Hilbert on the Border War victory…
“We blocked balls at critical times and did a really good job in the second set; then in the last set creating some error situations for Wyoming. We also out-dug them which is a very good thing. I think we could even play a little bit better defense, but we played good enough defense to extend rallies, and many of those rallies ended on a Wyoming hitting error. Breana Runnels had a very productive night and so did Sasha Colombo, and that is where we thought we would get some productivity. I think we’ve played better than tonight and I think Wyoming has something to do with that. They do a nice job blocking and they changed their serving strategy throughout the course of this match, and it worked.”

Hilbert on the team’s improvement since last facing Wyoming…
“That stretch of matches from San Diego State through Wyoming – I don’t think we played very well. It was a wake-up call for us, and we’ve been getting better ever since. I do think we’re a much better team now than when we played in Laramie.”

Katie Oleksak on the team’s drive to win the conference…
“I think you should go at every match with the same competitive desire, but it does give us a little bit more motivation in that aspect.”

Breana Runnels on developing as a hitter in pressure situations…
“My mentality is the same, but I also want to be given the ball in those situations. I want the setters to trust me. So, my mentality every time is to go up and kill the ball. Especially at the end of the match, I want to be that person who can help finish.”

STAT OF THE MATCH
Breana Runnels matched her career high with 20 kills in the Border War win, while also hitting .209 with nine digs and three blocks.

NOTES
­- Jessica Jackson finished second on the team with 12 blocks, while hitting .292.
– Sasha Colombo was one kill shy of matching her career mark with eight kills and hitting .412. She also dropped in three service aces, while recording a career-high five digs and three blocks.
– The Rams controlled the net, 11-9, with Paulina Hougaard-Jensen posting six blocks – two solo – and Kirstie Hillyer adding five – one solo.
– Katie Oleksak recorded her sixth double-double of the season dishing out 44 assists and posting 10 digs. She also added three aces – matching her career-high.
– Maddie Foutz and Olivia Nicholson also reached double-figured digs with 10 and 11, respectfully.
– Colorado State kept Wyoming at bay holding it to a .131 hitting percentage, which the Cowgirls hit .545 in the third set otherwise under .100 the rest of the match.
– CSU posted a match-high five blocks in the second set and four in the final frame.
– The Rams split the Border War series this season and now hold a 65-21 record against Wyoming.

NEXT
Colorado State will finish the week on Thursday, playing at Air Force for a 7 p.m. MT match.

The Cowgirls (16-9, 8-5 MW) did what no Mountain West team has done since Oct. 24, 2017, and took a set from the Rams at Moby Arena. After a falling down, 2-0, to start the match, the Pokes dominated the third and led late in the fourth, but a late Colorado State run put the match out of reach.

The Wyoming offense was led by Halie McArdle, who racked up 14 kills on the night to set a new season high while also compiling seven digs. Setter Cori Aafedt added 20 assists, while freshman KC McMahon recorded a career high four service aces. In fact, as a team Wyoming combined to drop in 10 service aces—shattering the previous single-match high of six.

Defensively, Jackie McBride led the Cowgirls with seven of the team’s nine blocks along with seven kills and a pair of aces. Libero Madi Fields added 17 digs to surpass 400 on the season and move into eighth on the program single-season digs list.

The Cowgirls opened with an 8-5 lead in the first, but an 11-0 run for the Rams seized control of the set. Even with a 6-0 Wyoming run late to pull within three at 23-20, Colorado State was able to quell any hopes of a comeback as the Rams scored a couple unanswered points to take the first, 25-20.

After Wyoming was unable to overcome a 6-1 deficit early on in the second set on the way to a 25-19 Colorado State win, the Cowgirls answered back in the third. The Brown and Gold never trailed and dominated the Rams for a 25-16 set victory to take back some momentum in the match. Wyoming had no attacking errors in the third, recording a match-high .545 hitting percentage in the frame.

The Cowgirls will be back in action on Saturday at 1 p.m. when they travel to Colorado Springs, Colo., for a battle with Air Force.