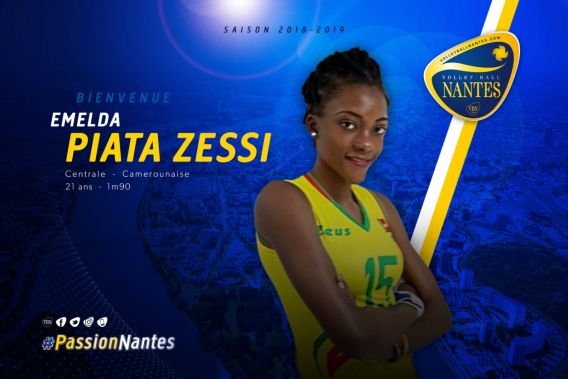 Zessi was a member of Cameroon's national team at the 2016 Olympics, and won a gold medal with the team at the 2017 African Cup of Nations. Current Photo via .volleyballnantes.com/

French club VB Nantes has announced in its official website the signing of Emelda Zessi to its roster. The 21-year-old 6’2″ middle blocker, a native of Cameroon, is set to undergo her first professional season outside of her home-country.

Nantes’ coach, Sylvain Quinquis, talked about how he came across Zessi in a trip to the African country:

“I discovered Emelda during my summer stay in Cameroon, as part of the seminar organized by the association Hope Africa. She was training with the national team to prepare for the future world championships that will take place in Japan. After discussions with her coach, whose wish was to bring to the player a club structure able to develop her high potential, we began the process of welcoming her to Nantes. Winner of the Africa Cup of Nations last season, the future N°16 of our team will arrive in in October.”

Zessi was a member of Cameroon’s national team at the 2016 Olympics, and won a gold medal with the team at the 2017 African Cup of Nations. She will be the fourth Cameroonian player to be feature in the French League this year, the others being Yolande Guigolo (Chamalieres), Christelle Nana (Chamalieres), and Laetitia Moma (Baroeul). At Nantes, she’ll find a team that finished its last season in 8th place with a 8-14 record, being bounced from the playoffs by eventual champions Beziers in two games.