NAU Set to Face Big Sky Leaders on the Road 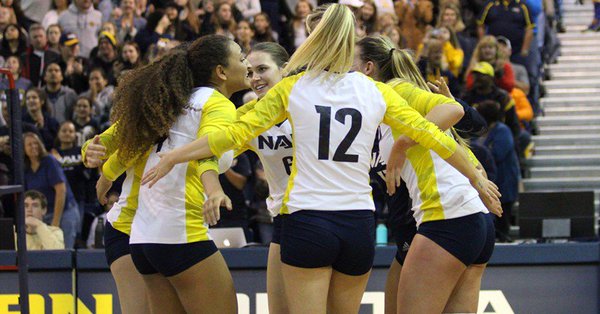 A second consecutive week on the road will present the Northern Arizona volleyball team with a tall task. NAU will play Weber State and Idaho State, two of the four teams tied atop the Big Sky standings, on Thursday and Saturday respectively. Current Photo via Northern Arizona Athletics

FLAGSTAFF, Ariz.  – A second consecutive week on the road will present the Northern Arizona volleyball team with a tall task. NAU will play Weber State and Idaho State, two of the four teams tied atop the Big Sky standings, on Thursday and Saturday respectively with both matches beginning at 6 p.m. MST.

The Lumberjacks are one of seven teams jockeying for position in the conference standings as the conference flips to the second half of play this week. At 5-3 in league play, NAU is one of three teams trailing the current leaders by a game. Idaho State and Weber State are among a quartet of teams currently at 6-2, as a total of seven of the top eight teams are separated by only a single game.

“The second half of the conference season is going to be fun,” said head coach Ken Murphy. “We learned a lot about ourselves during the first half. We’ve been very competitive in every match we’ve played and we feel like we match up really well. We’re excited about being involved in this wide open race. We had great matches against both of these teams this weekend the first time around, and we’re going to try and get on a roll to separate ourselves from the pack.”

This week’s matches will represent the second meetings versus Idaho State and Weber State this season. NAU dropped a five-setter to Idaho State on Sept. 20 before knocking off Weber State in four sets on Sept. 22 with both matches at home.

NAU fell to 13-8 overall, and had its three-match win streak snapped, last Saturday by virtue of a five-set loss to Northern Colorado. The defeat was NAU’s fifth in a five-set match this season as the Lumberjacks have played a total of seven five-setters. NAU hit only .195 in the match, while Northern Colorado hit .241. Not coincidentally, the Lumberjacks’ three lowest hitting matches and their opponents’ top three hitting matches have resulted in NAU’s three conference losses – all of which have been in five sets.

Redshirt senior Kaylie Jorgenson continues to excel in all areas of the game as she leads the Lumberjacks in kills (3.06 per set) and ranking second in digs (3.98 per set) and aces (26). Jorgenson also ranks third in blocks with 49, including a team-leading 19 solo blocks. Last week alone, she totaled seven solo blocks and nine aces in the Lumberjacks’ matches against Southern Utah and Northern Colorado. Most recently, she tied for the program’s second-highest single match total with seven aces versus the Bears.

Junior Abby Akin is on pace to break her own school record in hitting percentage, as she ranks second in the league with a .370 attack clip. Akin already owns two of the top three single season hitting percentages, including a program record .367 in 2016.

The Lumberjacks’ libero, senior Jordan Anderson, moved up to fifth all-time in career digs last Saturday and needs just 16 digs to jump another spot into fourth. She is currently at 1,213 digs entering the week.