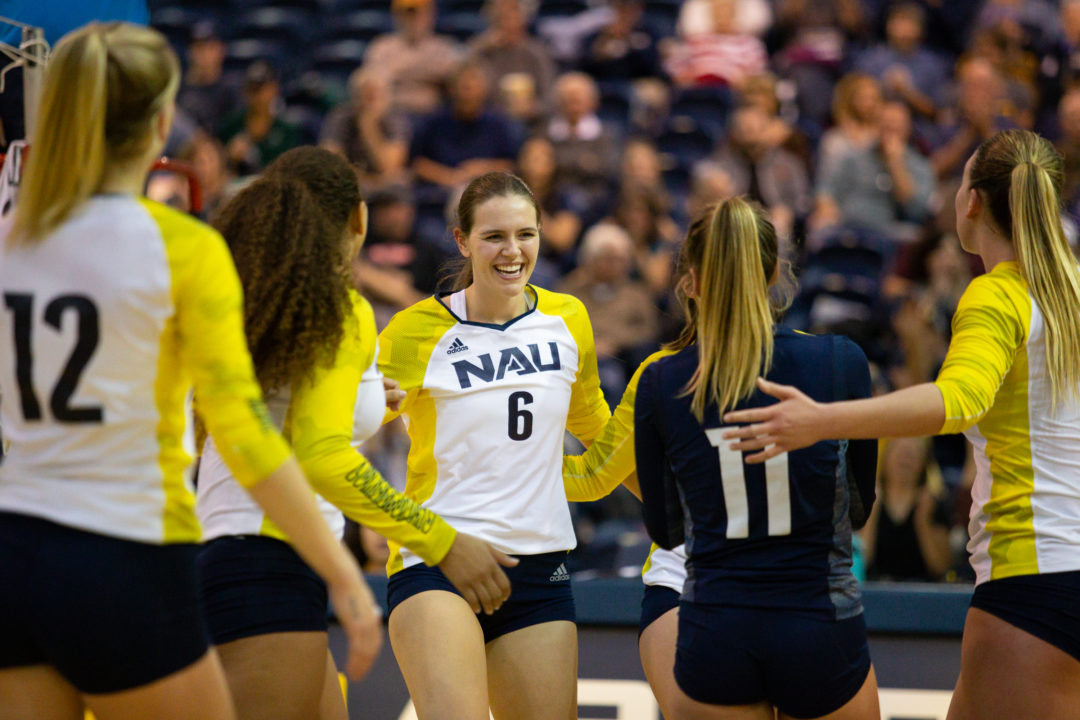 Davis led all players with 11 kills and hit .391 in the process, while Harris hit .360 and recorded 10 kills. Along with redshirt senior Kaylie Jorgenson’s 10 kills on .375 hitting, the three Lumberjacks matched the Hornets’ total kill output of 31 by themselves. NAU hit .313 as a team and frustrated Sacramento State into a .081 clip.

“We felt that if we could make them predictable, it would help us,” said head coach Ken Murphy. We made (Nocetti)’s shots easier to read and our defenders got in good spots. There’s no way you can compete with a team as good as Sacramento State without controlling their best player and that’s what we did tonight.”

As well as NAU’s offense clicked, its defense was lock down as the Lumberjacks outdug (68-53) and outblocked (6.0-1.0) the Hornets. Jorgenson posted a match-best 19 digs and also notched both of NAU’s solo blocks. Senior Jordan Anderson and junior Sydney Lema added 16 and 13 digs respectively, while redshirt senior Brittni Dorsey tallied a match-high four rejections.

Harris spearheaded a fast first set with six kills as NAU snagged the early lead. The ‘Jacks never trailed, breaking a 2-2 tie with four straight points, as they strung together five runs of three or more points. Sacramento State committed nine attack errors in the opening game and barely managed a positive attack percentage of .026.

The Hornets appeared poised to even the match, getting out to an 8-4 lead at an early Lumberjack stoppage in the second set. However, NAU fought back to an 11-11 tie in what would be the first of eight straight stalemates as the teams traded points until 18-18. An ace by freshman Aubrea Bandfield followed by a Sacramento State error forced a Sacramento State timeout, but the Hornets pulled back even at 20-20.

With the teams deadlocked at 22-22 – the 13th tie of the game – the ‘Jacks broke through with a final three-point spurt. Anderson capped the second set with an ace to clinch an important 2-0 match lead.

“We always talk about momentum at the end of a game, even if we can’t pull out the game,” Anderson said. “We want to have the momentum going into the next game. To finish the second game really had us feeling good going into the third game and then we took care of business.”

The Lumberjacks’ late push carried over into the third set with a 7-0 start to the last game. Davis opened the third set with two consecutive kills and had three total during the run in a wire-to-wire advantage en route to the resounding sweep. Davis had six total kills and junior Abby Stomp dished out 10 of her team-leading 21 assists in the third set. Dorsey and Davis stuffed the Hornets on match point, propelling the Lumberjacks into not only a tie with the Hornets in the conference standings, but also exacting revenge on a five-set loss suffered a month ago in Sacramento.

“We knew where we stood in the rankings and that this match was a big deal, but we treated it like any other match,” Anderson said. “We’re on a roll right now and mentally, we’re tougher than we were at the beginning of the season.”

NAU will host Portland State on Saturday at 12 p.m. in Rolle before the Homecoming football game. The Lumberjacks encourage all fans to join them in their annual Pink match for breast cancer awareness. Pink rally towels will be handed out to fans upon arrival.