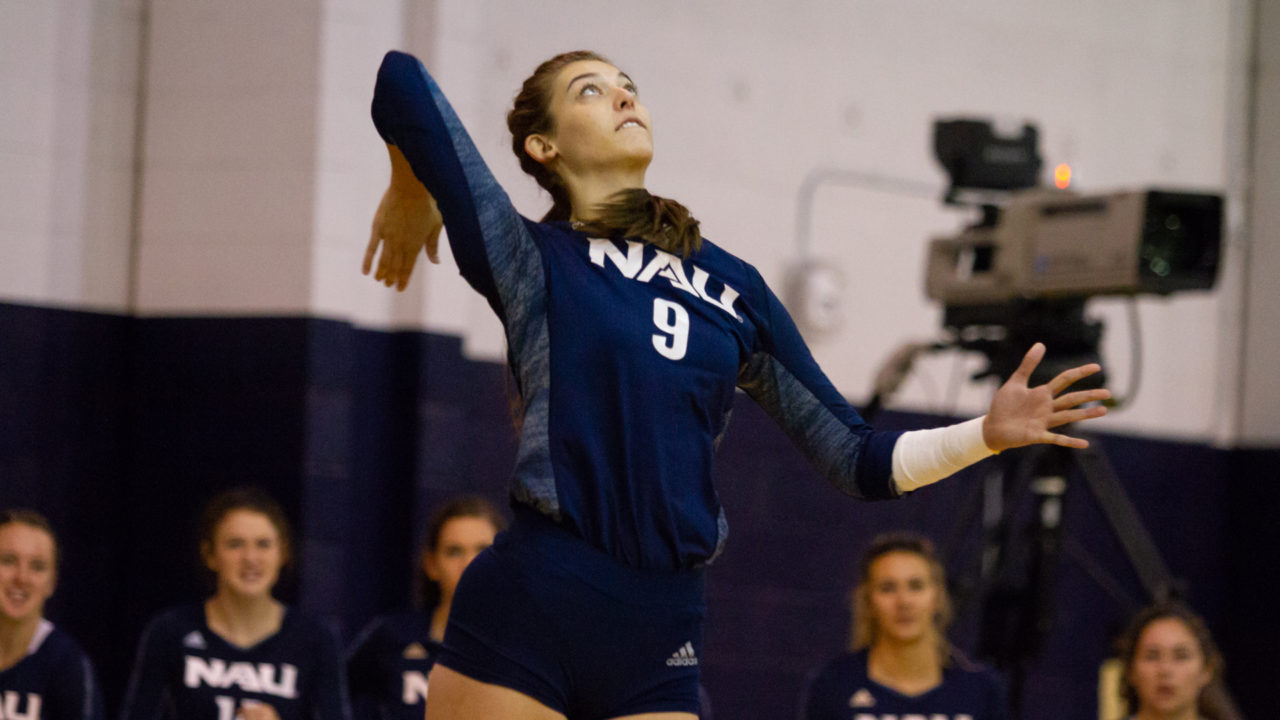 Northern Arizona’s Abby Akin and Sacramento State’s Paige Swinney were selected as the #BigSkyVB Players of the Week. Akin was tabbed the Offensive Player of the Week, while Swinney earned defensive recognition.  Current Photo via Northern Arizona Athletics

OGDEN, Utah  – Northern Arizona’s Abby Akin and Sacramento State’s Paige Swinney were selected as the #BigSkyVB Players of the Week. Akin was tabbed the Offensive Player of the Week, while Swinney earned defensive recognition.

Akin, a junior middle blocker from Phoenix, Ariz., was named to the Lumberjack Classic All-Tournament Team after averaging 2.69 kills per set and hitting .424 over the course of three home matches, including NAU’s monumental victory over No. 8 Florida Friday night.

#⃣9⃣ earns her fourth career @BigSkyVB Player of the Week Honor after hitting .424 during the Lumberjack Classic!

She scored the most points on the team, accounting for 46.5 points at an average of 3.58 per set. In NAU’s first ever victory over a nationally-ranked opponent on Friday, Akin matched her season-best with 14 kills on .333 hitting to help the Lumberjacks upset last season’s national runner-up. She also matched her career-high of three solo blocks.

Akin started the tournament by hitting a career-high .800 in NAU’s quick sweep of Southern Illinois Friday morning. She totaled eight kills on just 10 attempts without an error. She concluded the weekend by hitting .385 against CSUN, recording 13 kills and totaling eight blocks on Saturday. Akin also added a pair of aces during the weekend.

Swinney, a sophomore libero, helped the Hornets to a 2-2 record last week, which included a Sacramento State Invitational championship. The Sugar Land, Texas, native had at least 15 digs in all four matches, and was an all-tournament selection at the Sacramento State Invitational. She also tacked on six aces and finished the week with averages of 4.76 digs and 0.35 aces per set.

Congratulations to Paige Swinney who was named the #BigSkyVB Defensive Player of the Week after combining for 81 digs last week! #StingersUp https://t.co/L0o7LbkRMw pic.twitter.com/wSTIMxl0aA

Swinney helped the Hornets to a 2-1 record at the team’s two-day tournament, including four-set wins over Nevada and UC Riverside, and a five-set loss to Seattle (15-13 in the fifth). She had 15 digs, three aces and five assists against Nevada on Friday, and followed that up on Saturday with 23 digs and two aces vs. UC Riverside, and 24 digs, three assists and an ace vs. Seattle.

In Tuesday’s four-set loss to UC Davis, she posted 19 digs and four assists.

Swinney has now been named all-tournament twice this season, and currently ranks fifth in the Big Sky with an average of 4.73 digs per set. This is her first year as the Hornets’ starting libero.