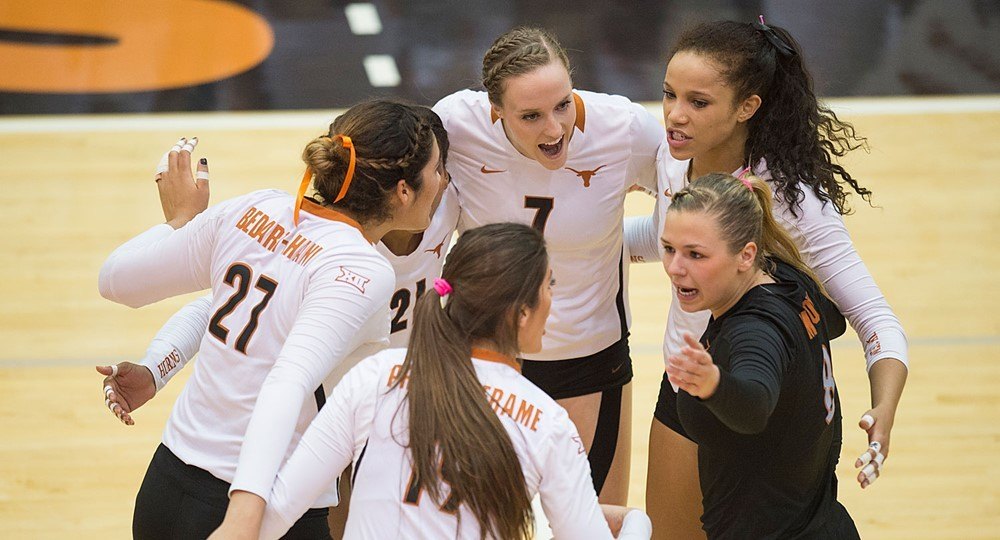 Kansas took the Big 12 title, but Texas is the higher seed in the tournament. Still, the #4 Longhorns and #5 Jayhawks could meet for a winner-takes-all quarterfinal showdown. Archive Photo via Texas Athletics

Earlier tonight, the NCAA announced the first-round matchups and host sites for its 2016 National Championship Tournament. Here’s a quick look at the matchups in the bottom left quarter of the bracket:

Here is the bottom left quarter of the bracket! #NCAAVB pic.twitter.com/z41zjqdjOC

UT-Rio Grande Valley makes its first-ever NCAA appearance and will face #4 seed Texas. Despite coexisting in the same state, the two programs have not met since 2002, and prior to that, hadn’t played since the 1970s. Texas was last year’s NCAA runners-up and are currently undefeated in 1st round matches at 29-0. The winner will take on Texas A&M or SMU in a Texas-heavy portion of the bracket.

After breaking through for the first NCAA tourney berth in program history last year, SMU is back to the big show with another AAC title. They stay in-state to face Texas A&M, the first time the two programs have ever played head to head. It’s the second-straight year A&M will play a Texas opponent in the first round. They beat A&M Corpus Christi 3-0 last year.

Princeton is back to the NCAA Tournament for the first time since 2007, but has to face a BYU squad that has been on fire this year. Winners of the West Coast Conference, Brigham Young has beaten tourney teams LIU Brooklyn (3-0), Ohio State (3-2), Boise State (3-0), Missouri (3-0) and UNLV (3-0) this year. The Cougars are also on an 11-match win streak. Princeton went 13-1 within the Ivy League this year to win the conference title and are looking for the first NCAA Tournament win in program history.

Two newcomers to the NCAA tournament this year. UNLV was third in the Mountain West, but a stellar year for that conference saw Boise State, Colorado State and the Runnin’ Rebels selected. Utah, meanwhile, finished just 5th in the Pac-12 but have been upset machines, with wins over SEC champ Mizzou, WCC champ BYU and Pac-12 power Stanford. A win against UNLV could set up a rematch with BYU in what would likely be one of the most-anticipated round 2 matchups of the year.

Samford beat top-seeded Chattanooga to win the SoCon and make the NCAA Tournament for the third time in six years. They’ll face Kansas, which won the Big 12 but only garnered the 5th seed compared to Texas’s 4 seed. The two could meet up in a huge rivalry match, but it wouldn’t be until the fourth round of the tournament. Kansas has just two losses this year: to Purdue and Texas, both on the road. They’ll take a 12-0 home record into the tourney while hosting at least their first two matches.

We had UNI as our very last team in the tournament, and sure enough, the Panthers snuck into the tourney for the second straight year. UNI has only 9 losses, but one did come in a sweep to Creighton back in September. Creighton will make a 5th-straight appearance after winning a third-straight Big East title. They made a run to the third round last year, knocking off both Coastal Carolina and North Carolina before running up against UNC.

Patriot League champs American University make their fourth-straight NCAA tournament bid, heading to Ann Arbor to take on Michigan, after the Wolverines’ rival Ohio State ended American’s season a year ago. American was nearly perfect (15-1) in the conference, but did lose to Michigan 3-0 back in early September. American has won 18 of its last 20. Michigan’s 12-seed is the highest in school history, and the Wolverines have been in 10 of the past 11 tournaments. Michigan has been on the cusp of beating a bunch of great teams this year, falling 3-2 to Wisconsin and Minnesota and beating Penn State in five sets.

Miami hasn’t been in the tournament since 2008, and earned an at-large bid after making it to the MAC Championship match against Norther Illinois. The Redhawks have some key wins on the year, including over SEC champs Missouri. Oregon appears in its sixth-straight NCAA tourney with wins over Utah, Washington and USC. That Washington victory was a 3-0 sweep of the eventual Pac-12 champs.