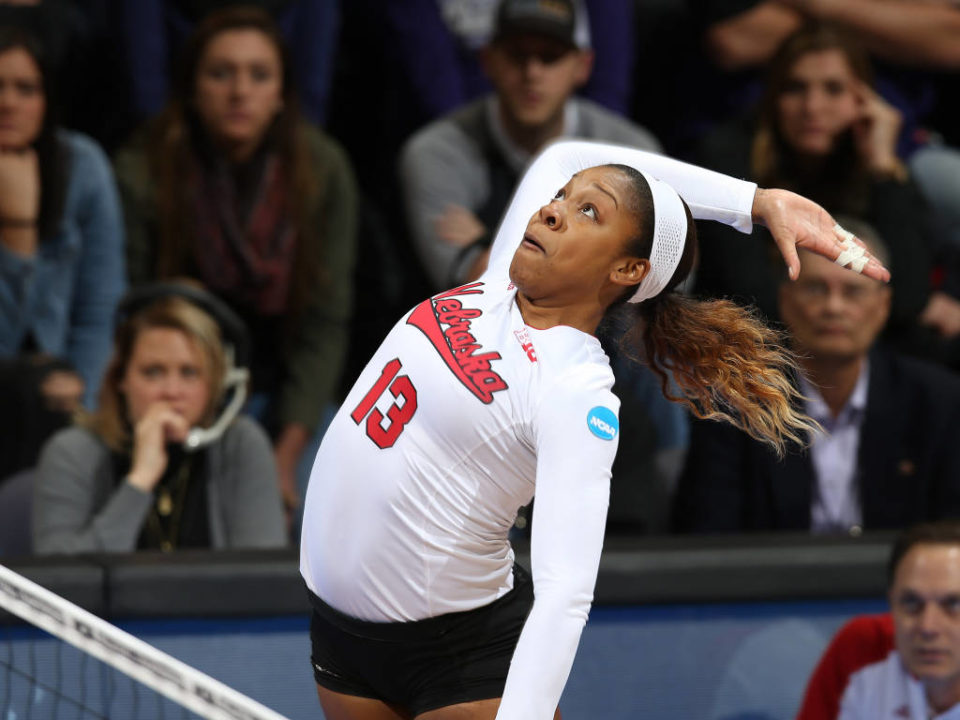 The Nebraska Cornhuskers are in rebuilding mode this season, after graduating starting libero Justine-Wong Orantes, the Rolfzen twins, and #3... Archive Photo via Huskers.com

The Nebraska Cornhuskers are in rebuilding mode this season, after graduating starting libero Justine-Wong Orantes, the Rolfzen twins, and #3 offensive option Andie Malloy after last season. But their effort to return to a 3rd-straight Final 4 have taken another blow this season, as injuries have plagued the Cornhuskers’ early efforts.

After losing to giant-killers Northern Iowa in their early game on Saturday, Nebraska comfortably swept Nebraska-Omaha 3-0 (26-24, 26-15, 25-13) in the evening match. In spite of the win, the Huskers had a casualty – senior middle blocker Briana Holman left the match in set 3 with an apparent ankle injury.

Midway through the final set, Holman went to the court clutching her left ankle. She left the court on crutches after the match. Nebraska head coach John Cook said after the match that they wouldn’t know the severity of the injury until Sunday.

Holman was a 2014 First Team AVCA All-American at LSU before transferring and earned Honorable Mention nods in 2013 and 2016. She sat out the 2015 season when LSU wouldn’t release her to play immediately for Nebraska.

Last year, in her first season in Lincoln, she ranked 3rd among all Nebraska players in total points (358) and points/set (3.06) while starting all 34 matches on the season. She also led the team in hitting percentage (.350) and was 2nd in total blocks (138) behind now-graduated Amber Rolfzen. Holman also leads the team in total blocks (40) so far this season.

She was replaced on the court by freshman Chesney McClellan, a 6’4″ middle blocker who made her college debut as a result. McClellan didn’t record any official stats after her entrance to the match.

Nebraska also started the season without senior captain and starting setter Kelly Hunter, who is recovering from an injury of her own that has cost her practice and game time this fall. Holman and Hunter, along with Annika Albrecht, were expected to bring some senior stability to a young team.

For the Huskers, freshman Jazz Sweet continues to pick up a big part of the early load this season. She’s started 4 of 10 games for Nebraska, hitting a team-best .354 as an outside hitter – a number usually only sustained by middle blockers. That included 7 kills and just 1 error on 13 swings against Omaha on Saturday.

Nebraska has not made any statement on how much time Holman is expected to miss. Next up for the Huskers will be a brutal start of Big Ten play, where they face top-25 teams in  of their first 5 matches, including Penn State, Minnesota, Wisconsin, and Michigan State.