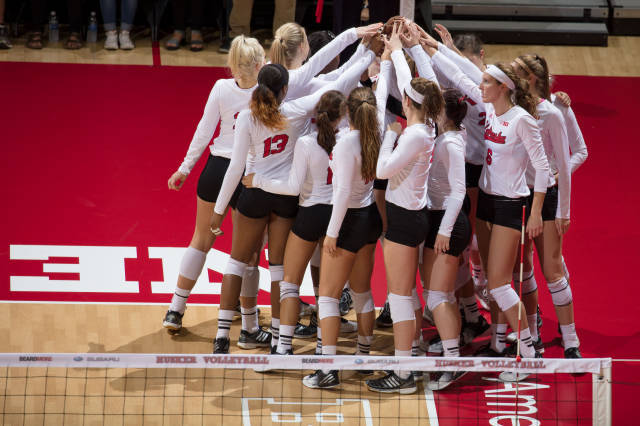 A 28-match winning streak has come to an end for the Nebraska Huskers after a 3-1 defeat at the hands of the #19 Ohio State Buckeyes on Saturday in Lincoln. The match saw Nebraska’s biggest crowd of the season with 8,368 in attendance at the DeVaney Center.

Ohio State has had Nebraska’s number of late: this is their third-straight victory against the most powerful program in collegiate volleyball and the consensus #1 team in the nation coming into the match. Ohio State has also won 4 of their last 5 against Nebraska.

Ohio State’s win came in a long 4-set match in front of 8,368 at the Devaney Sports Center.

Nebraska appeared dominant at the end of the first set, where they held Ohio State to .000 hitting and had an 8-1 run to push ahead 21-13.

In the last, Ohio State never trailed and eventually pulled away for an emphatic victory. In that least set, Ohio State had 5 blocks and went 13-13 on sideout opportunities while holding Nebraska to -.057 hitting.

All-in-all, this was Nebraska’s lowest hitting average of the season (.175) and their lowest kills-per-set (11.25) output of the season as well.

Ohio State had three players with double-figure kills, including Luisa Schirmer, who had 16 on 37 attacks (.270 average) to go with 12 digs. To go with 3 blocks and 2 aces, Schirmer was the key for the Buckeyes – she hit .480 in the three sets won by Ohio State.

LINCOLN, Neb. — Deju vu struck inside a packed-house at the Devaney Center as the Ohio State women’s volleyball team exited with victory in hand (17-25, 25-21, 25-21, 25-13) for the third consecutive time (2012, 2014, 2016). The most recent victory snaps No. 1 Nebraska’s 28-match winning streak dating back to last season and marks the fourth win for Ohio State over the Huskers in the last five meetings. The 19th-ranked Buckeyes improve to 12-4 this season and even up the Big Ten ledger at 2-2 after a pair of victories this week.

Since joining the Big Ten in 2011, Nebraska owns a winning record against all conference school except Ohio State at 4-4. The Buckeyes are 4-3 all-time in Lincoln overall in program history.

After dropping the opening set, 25-17, the Buckeyes turned it on and out-scored Nebraska by a combined 20 points over the last three sets. It all came to crescendo with a 25-13 drubbing in the fourth to shut the door. Ohio State’s Luisa Schirmer attacked .480 on 14 kills during the three victorious sets. She added in a dozen digs to record her second straight double-double. Schirmer was also responsible for three block assists and two service aces, directly responsible for 19.5 points.

Taylor Sandbothe matched Schirmer’s 19.5 points, going berserk to the tune of 12 kills, nine blocks (2s, 7a) and a pair of aces. Sandbothe’s .346 hitting pace was only surpassed by fellow Taylor, Hughes, terminating a career-high 11 kills at a .500 rate (11-2-18). Freshman Camry Halmpaced the squad digging up 14 balls, helping to limit Nebraska at a .175 attacking efficiency overall.

On the night, Sandbothe leaped over Danielle Meyer (2004-07) into second place on the all-time Ohio State career blocks list. The senior Buckeye from Lee’s Summit, Mo., now owns 481 blocks and is chasing down current record-holder Dawn McDougall (1988-91) and her 517 rejections.

Set 1: The opening set was tightly contested until a 9-1 run for the Huskers converted a slim 13-12 lead into a 21-13 stronghold. The eight-point margin held steady through a final tally of 25-17 in favor of Nebraska.

Set 2: Hughes took matters into her own hands during the second stanza, carrying the OSU offense by directly impacting 17 of the team’s 18 kills on 11 assists and six kills. Despite Hughes’ heroic effort, the Buckeyes found themselves trailing 15-13 midway through the period when a four-point OSU spurt comprised of back-to-back-to-back-to-back kills by Team Taylor — a pair of put-aways from Hughes bookend by Sandbothe kills. Ohio State would tack on two more tallies to its advantage by set’s end (25-21), tying up the match heading to intermission.

Set 3: Offensive fireworks were aplenty in the third. Ohio State attacked .536 while the Huskers came in at .312. The score evened up on 13 different occasions before the Buckeyes went ahead for good via a Hughes-to-Sandbothe hook-up to shove OSU on top 20-19. Ohio State then secured five of the next seven rallies for another 25-21 triumph.

Set 4: The Buckeye attack cooled slightly in set number four, dipping to a still-impressive .346 clip. Meanwhile, Sandbothe wagged her finger en route to five rejections, driving the Huskers into the red offensively with a negative-.057 hitting percentage. The flood gates opened up pretty quick when Ohio State raced ahead 7-3 to force a Husker timeout. The break in action did little to slow down the Scarlet Train, barreling down the tracks to its final destination — a 25-13 clincher. The Buckeyes posted a flawless 100% side-out percentage in the final set, taking the point on all 13 Husker serves.

BUCKEYE BITS
-Twelve years ago to the date, Ohio State defeated No. 1 Minnesota on Oct. 1 2004; also in four set
-The win in Lincoln is the first over a No. 1-ranked team on the road in school history

Ohio State ventures to `that state up north’ next week for matches at _ichigan State and `that school up north.’ Friday’s match vs. Sparty starts at 7 p.m. and Sunday’s rivalry match against the Wolverines is set for a 1 p.m. first serve broadcast live on ESPN.

The Huskers (12-1, 3-1 Big Ten), the only unbeaten team remaining in Division I entering the match, had their 28-match win streak come to an end at the hands of the Buckeyes (12-4, 2-2 Big Ten), who have beaten the Big Red in the last three meetings.

Ohio State got 11 kills from its setter Taylor Hughes in addition to her 41 assists and eight digs. Luisa Schirmer had a team-high 16 kills with 12 digs. All-American Taylor Sandbothe had 12 kills and nine blocks.

Set 1: Both teams struggled to find their serves in the first set, as they combined for eight errors early in the set. Nebraska rallied from a 10-9 deficit to go up 12-10 with a kill by Kadie Rolfzen and a block by Kadie and Amber Rolfzen. Kills by Andie Malloy and Hunter, as well as an ace by Annika Albrecht, put NU ahead 17-12 via a 4-0 run. Hunter was in on back-to-back blocks as the Huskers extended the lead to 19-13, forcing Ohio State’s second timeout. Sydney Townsend continued the run after the timeout with an ace, and the Huskers won a rally that included some incredible digs and culminated in a stuff by Hunter and Briana Holman that made it 21-13, bringing the Devaney Center crowd of 8,368 to its feet. Nebraska finished off the set in front, 25-17. The Huskers hit .286 and held Ohio State to .000.

Set 2: NU took an 8-4 lead after a 5-0 run that included two Hunter/Amber Rolfzen blocks and a Hunter kill. The Buckeyes fought back to within 10-9 before another kill by Hunter sparked a 3-0 spurt that put Nebraska back in front by four, 13-9. But Ohio State cut it to 14-13 with back-to-back kills by Sandbothe and Hughes. The Buckeyes claimed the lead at 17-15 on back-to-back kills by Hughes and one by Madison Smeathers. The Huskers evened the set at 18-18 after a block by Mikaela Foecke and Holman, but Ohio State went right back in front with a pair of kills for a 20-18 lead. Ohio State closed out the set with a 25-21 win to level the match.

Set 3: A Kadie Rolfzen kill put the Huskers ahead 5-3 before Ohio State ran off three straight points to take a 6-5 lead. The Buckeyes took a 15-13 lead into the media timeout, but afterward Amber Rolfzen and Foecke smashed kills after a Buckeye service error to put NU on top 16-15. Ohio State scored the next two to go up 17-16 and pushed the margin to two at 21-19 on Hughes’ ninth kill. The Buckeyes pulled away down the stretch to win 25-21, finishing the set on a 10-5 run. While NU hit .312 in the set, Ohio State hit .536 with 18 kills.

Set 4: Ohio State, with all the momentum on its side, never trailed in the fourth set and pulled away for the 25-13 win. In the final frame, the Buckeyes hit .346 and limited the Huskers to -.057. Ohio State had five blocks in the set, including one solo and four assisted by Sandbothe.

Up Next: The Huskers are home for a pair of matches next weekend. NU hosts Indiana on Friday at 7 p.m. on NET, and Purdue on Sunday at 2 p.m. on ESPN2.