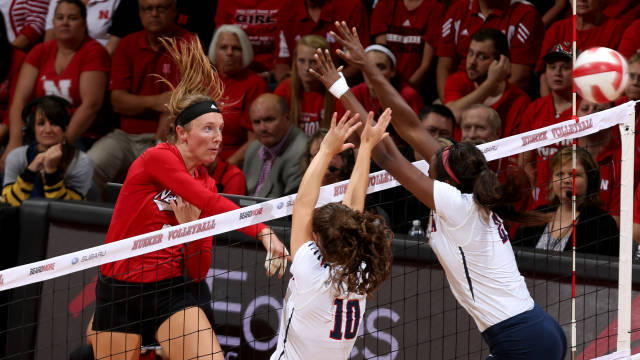 The Nebraska Cornhuskers defeated the Minnesota Golden Gophers in the biggest match of weekend play, which was enough to lift them past the 3-loss Wisconsin Badgers for the top spot in the latest RPI rankings, which were released on Monday.

Nebraska, who was already ranked #1 in last week’s AVC coaches’ poll, picked up victories over both Wisconsin and Minnesota last week in the course of 3 days – including a sweep of the former #1 Badgers. While those losses didn’t hurt their opponents’ rankings much, it did lift the Huskers to the top of the national rankings.

The Huskers are one of only two remaining 1-loss teams in Division I this season. Dayton, who ranks 33rd in the current RPI, also has just 1 loss this year – an 0-3 sweep back in mid-September against Loyola Marymount.

Minnesota also had a tough schedule last week, beating then-AVCA-18th-ranked Michigan on Wednesday on the road.

The only new team in this week’s top 10 are the UCLA Bruins, who moved up 4 spots after beating Stanford and Cal last week. Michigan State lost to Ohio State on Saturday to drop out of the top 10.

One other notable mover at the top of the RPI is North Carolina, who swept Boston College and Syracuse, respectively, on Friday and Sunday. While they won easily, the matchups were against 2 of the 4 lowest-rated teams in the lowest-rated of the Power 5 conferences, leading the metrics to drop them down from their previous slot at #5.