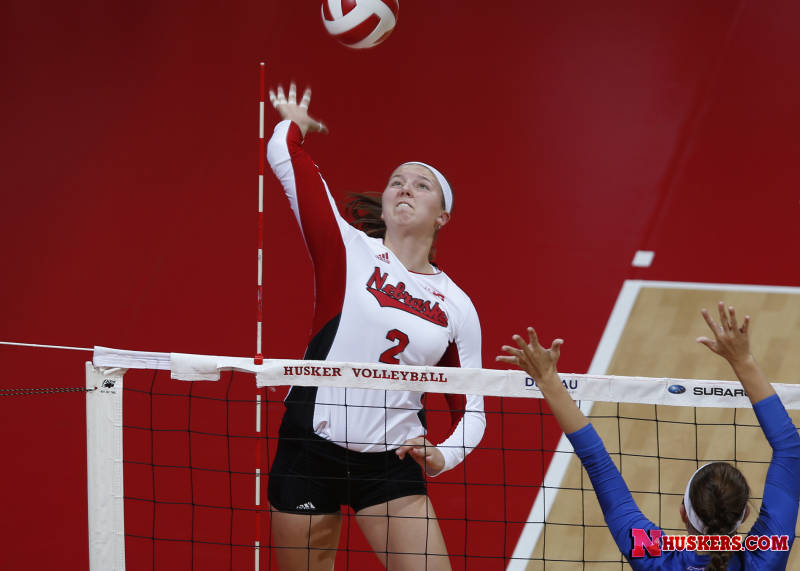 Mikaela Foecke was a unanimous choice on the All-Big Ten Preseason Team as Nebraska is the conference favorite heading into the year. Archive Photo via Nebraska Athletics

The 2018 preseason Big Ten awards and predictions are out as defending National Champions Nebraska are the projected favorite. They are followed by Wisconsin, Minnesota and Penn State, who are all in the top 10 as well in both the VolleyMob Preseason Top 25 and the AVCA Coaches Poll.

The Huskers, who went 32-4 last season and won the Big Ten at 19-1 in league play, return just two starters plus the libero. However, two of those three are on the preseason team in Mikaela Foecke and Kenzie Maloney. Additionally, they tack on a highly touted recruiting class and three transfers, including Lexi Sun. They also had eight first year players in 2017’s title run that garnered some valuable experience.

Wisconsin is picked to finish as the runner-up, despite being voted in the AVCA Preseason Poll as the fourth highest Big Ten team. They bring back four starters plus the libero and a formerly injured Molly Haggerty, with Tionna Williams on the preseason All-Big Ten Volleyball Team. No one stands out more than Dana Rettke though, who will be one of the top contenders for the Big Ten Player of the Year honor.

Rounding out the top three is Minnesota, who has the most players on the All-Big Ten team with Samedy, Seliger-Swenson and Hart. No other team put more than two. They also add on a big recruiting class.

Penn State actually wound up with the same record as Nebraska in the Big Ten last season at 19-1, but suffered their lone loss to the Huskers – who also downed them in the Final Four. Only one starter plus the libero are back, but a huge and talented recruiting class comes in plus Taylor Leath from North Carolina – who is the lone newcomer to make the All-Big Ten team and joins Kendall White on the list from the team.

Illinois also sits just on the outside of the top quartet with a myriad of experience and two players earning individual preseason awards. Michigan and Purdue are also in the VolleyMob Preseason Top 25.

After that is Ohio State, Michigan State and Iowa, who will hope to have NCAA Tournament aspirations in 2018. The Spartans are actually ranked 22nd in the preseason AVCA Coaches Poll after making the Elite Eight in 2017.

Finishing things up are the bottom four, with notably Indiana (12) and Maryland (13) right next to each other. That of course, is interesting because Steve Aird left the Terrapins for the Hoosiers.

The full list of the preseason team and the predictions can be seen below:

Preseason polls and all anything teams aren’t really worth much, but to ignore Lexi Sun is curious.. .