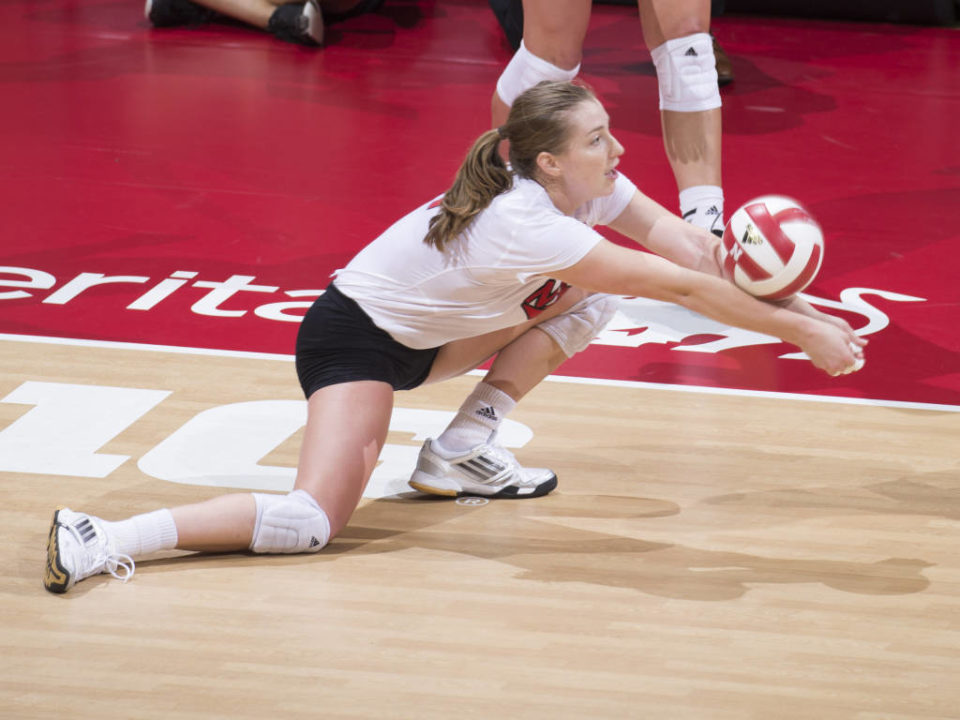 In the first match of this highly anticipated series, the #12 Nebraska Cornhuskers swept the #11 UCLA Bruins at home.

The Cornhuskers were led by outside hitters, Annika Albrecht and Mikaela Foecke, who both recorded double-doubles. Albrecht’s 12 kill (.400) and 15 dig performance mark a season high for her. Standout freshman middle blocker, Lauren Stivrins, contributed 8 kills (.222) to help her team secure the win. This match also featured the return of setter Kelly Hunter to the Nebraska lineup. In her first full time match back from injury, she put up 44 assists, 2 digs and a kill, leading her team to a .230 hitting percentage.

For UCLA, they were led by freshmen Mac May and Jenny Mosser who put down 9 and 8 kills respectively. Sophomore middle blocker, Madeleine Gates, scored 7 kills with the highest hitting percentage for her team .353. Transfer setter, Sarah Sponcil, added 28 assists and 11 digs to help her team. Both teams displayed great floor defense with UCLA tallying 56 digs to Nebraska’s 62.

UCLA will have a chance at redemption when the two teams face off again tomorrow at 7pm EST at the Devaney Center in Lincoln, Nebraska.

Mikaela Foecke and Annika Albrecht both produced double-doubles to spark the Huskers (4-2) to their fourth straight sweep. Foecke had 13 kills and 13 digs for her third double-double of the season, while Albrecht notched a season-high 12 kills on a career-best .400 hitting to go with 15 digs. On the right side, Jazz Sweet tallied nine kills, five digs and three blocks. Lauren Stivrins had eight kills, and Brian Holman had five kills and four blocks.

Setter Kelly Hunter played nearly the entire match and had 44 assists while leading the Huskers to a .230 hitting percentage. Nebraska’s defense was strong throughout the match, as it held UCLA (5-1) to .097 hitting. Along with Albrecht and Foecke’s double-digit digs performances, Kenzie Maloney had 15 of her own as NU won the battle, 62-56. The Bruins had a 10-5 edge in blocks, but NU made up for it and more with 48 kills to 32 for UCLA.

Set 1: The Huskers jumped out to a 4-1 lead and maintained a three-point edge at the media timeout, 15-12. Four different Huskers had at least two kills at that point. After the media timeout, Albrecht and Sweet powered home kills to make it 17-12 Huskers and force a UCLA timeout. A solo block by Sweet pushed the Huskers’ lead to 21-13. NU closed the set on an 11-3 run to win 25-15. The Huskers outhit UCLA .286 to .093, led by five kills from Stivrins on .429 hitting and four by Albrecht on .571 hitting.

Set 2: Nebraska led 5-3 before a 7-0 UCLA run that included a pair of kills by Mac May and two Bruin blocks. Trailing 14-11, the Huskers stormed back to take a 19-14 lead after back-to-back kills by Foecke, a kill by Holman and a solo block and kill by Holman. In all, NU went on an 8-0 run to reclaim the lead with four kills by Foecke. UCLA pulled back within 21-19 before Sweet and Stivrins struck for kills to double the lead to four, 23-19. The Huskers won 25-21 on another Foecke kill. The junior had seven kills and six digs alone in the second set.

Set 3: The Huskers built an 11-7 lead after a slew of UCLA hitting errors. Hunter’s first kill of the season on her first attack made it 14-12 Huskers. Nebraska pulled away from a 14-13 lead with an ace by Foecke, a block by Holman and Sweet, and two more kills by Sweet for a 20-16 advantage. UCLA made one last comeback attempt, getting within 23-20, but Foecke blasted her 13th kill and UCLA hit long for the Husker sweep, 25-20.

Up Next: The teams will play a rematch on Saturday at 7 p.m. at the Devaney Center. The match will be televised on NET and streamed at BTN2GO.com. Husker Sports Network affiliates will broadcast the match on the radio, and a live audio stream will be available at Huskers.com.