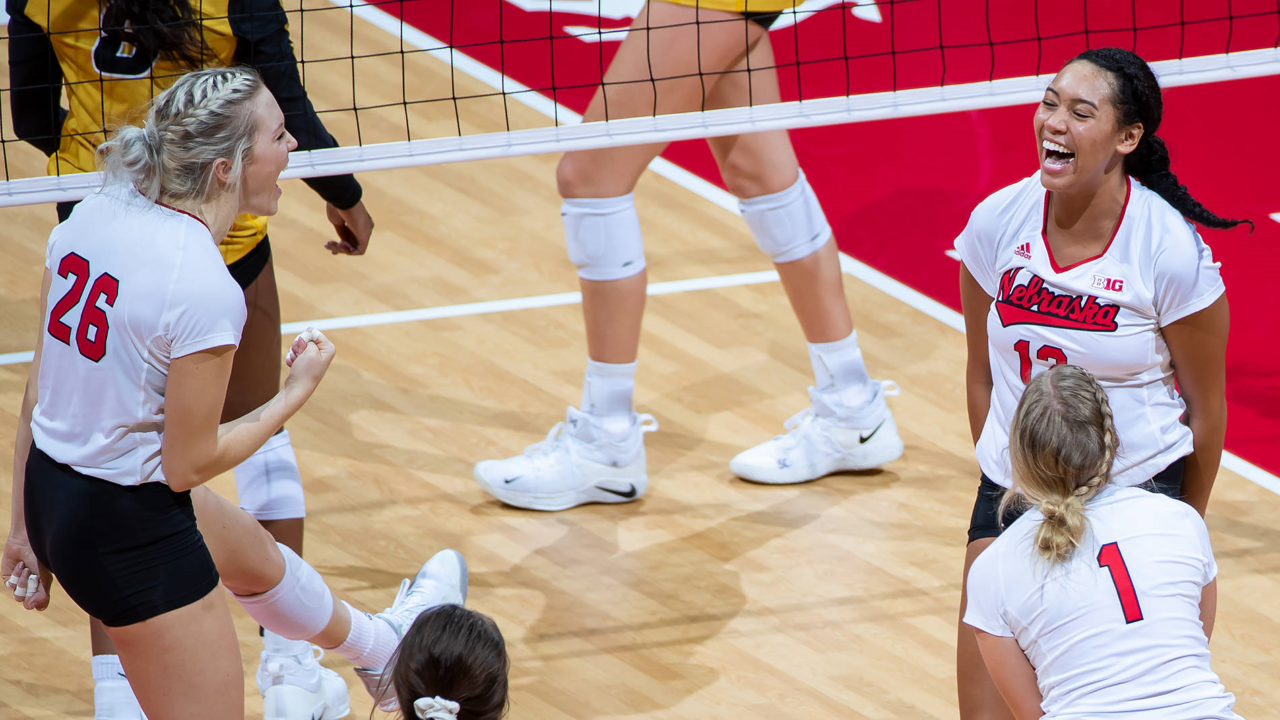 In her final home match, senior All-American Mikaela Foecke had 16 kills without an error to lead the No. 6 seed Nebraska volleyball team to a 25-14, 25-22, 25-18 sweep of No. 24 Missouri in the NCAA second round. Current Photo via Nebraska Athletics, Scott Bruhn

LINCOLN, Neb. – In her final home match, senior All-American Mikaela Foecke had 16 kills without an error to lead the No. 6 Nebraska volleyball team to a 25-14, 25-22, 25-18 sweep of No. 24 Missouri in a second-round NCAA Tournament match in front of a sold-out crowd of 8,382 at the Bob Devaney Sports Center. With the win, Nebraska advances to the NCAA Regional Semifinal, where the Huskers will face No. 10 Kentucky on Friday.

How sweet it is to be loved by @Huskervball fans. 😊

Foecke was brilliant for Nebraska, which won its 10th straight match to improve to 26-6 on the season. She had 16 kills on 24 error-free swings, hitting a season-high .667. The senior from West Point, Iowa, moved from sixth to fourth on Nebraska’s all-time kills list on the night, passing Husker legends Jordan Larson and Nancy Metcalf (Meendering). Foecke also had a pair of aces for the second straight night and added four digs and seven blocks. Including Friday’s sweep of Hofstra, Foecke totaled 25 kills without an error in the first two rounds of the NCAA Tournament, hitting .543 while chipping in four aces, 13 digs and 10 blocks.

While Foecke had a match-high 16 kills – her highest total in any of her 10 NCAA Tournament matches at the Devaney Center – sophomore Lexi Sun totaled 11 kills on a .333 attack percentage, while classmates Jazz Sweet and Lauren Stivrins had eight kills apiece, with Stivrins matching Foecke with a .667 attack percentage. Behind Foecke and Stivrins, who combined for 24 kills on 36 error-free swings, Nebraska hit .384 in the match. The total was the Huskers’ sixth-highest of the season and top mark against a ranked opponent, as Nebraska hit over .350 for the fifth straight match. Freshman Nicklin Hames set the efficient and balanced Husker attack, nearly missing a double-double with 37 assists and nine digs. Senior Kenzie Maloney paced the Husker defense with 12 digs, while Stivrins had a match-high six blocks.

Nebraska out-hit Missouri by .168, as the Tigers were limited to a .216 attack percentage one night after hitting a season-best .412 against Arizona. Leketor Member-Meneh and Kylie Deberg both finished in double-figure kills with 11 and 10 kills, respectively. Riley Sents had a match-high 16 digs, but the Huskers out-dug the Tigers 41-38 and out-blocked Missouri 8-4. With the loss, Missouri finished its season with a 24-8 record.

Set 1: After falling behind 3-0, Nebraska rattled off four straight points, keyed by a Sun kill and ace, and a Foecke kill. The run became 8-1 after Foecke and Stivrins stuffed a Mizzou attack, and Stivrins terminated a kill to make it 8-4. Stivrins added another kill before a Megan Miller ace, and Hames posted blocks on back-to-back plays to put NU up 12-5. A kill by Sweet made the lead eight at 16-8, and Foecke put the Huskers up by nine, 19-10, with her fourth kill. A pair of Missouri attacking errors increased the Husker lead to 23-13, and NU closed it out with a kill by Sun and ace by Hames for the 25-14 win. The Huskers hit .333 and held Missouri to .061. Foecke had five kills on six swings, and the Huskers had four blocks and three aces.

Set 2: The beginning of the second set played out almost exactly as set one did. Missouri took a 3-0 lead before the Huskers went on an 8-1 run to take an 8-4 lead, and Missouri called timeout. Foecke had three kills, while Sun, Stivrins and Sweet all added one. Stivrins and Foecke also combined for a block for the Big Red. Missouri responded better this time around, however, coming back to tie the score at 10-10 with a solo block and back-to-back kills by Deberg. Kills by Sweet, Sun and Foecke kept the Huskers in the lead, and Sweet hammered an overdig before a Missouri hitting error made it 17-13 Huskers. Missouri scored three of four points to get within 18-17, but Foecke recorded another kill and an ace on back-to-back rallies to restore a four-point lead at 21-17. Sun gave Nebraska set point at 24-21 with a pair of kills down the stretch, and Schwarzenbach clinched the 25-22 win with her first kill of the night. Nebraska scored 17 of its 25 points on kills with Foecke and Sun each posting six while hitting .545 and .500, respectively.

Up Next: The Huskers move on to face 10th-seeded Kentucky in an NCAA Regional Semifinal match next Friday in Minneapolis, Minnesota. No. 2 Minnesota will play 15th-seeded Oregon in the other match.

Despite the Tigers’ offense improving each set, the Cornhuskers were that much better throughout the night. Nebraska hit .333 or higher in each set played, including a match-best .469 hitting mark in set three.

“Obviously we’re disappointed with the outcome. We felt going in that it was going to be a tough match. Obviously it was as they’re (Nebraska) a good team and they’re here for a reason. I thought they did a really good job of putting pressure on us with their serve. It got us out of system and didn’t allow us to get in a flow. That was tough for us. I was really proud of our group and how they continued to battle. From a coaching standpoint, that’s all I can ask from our players.”