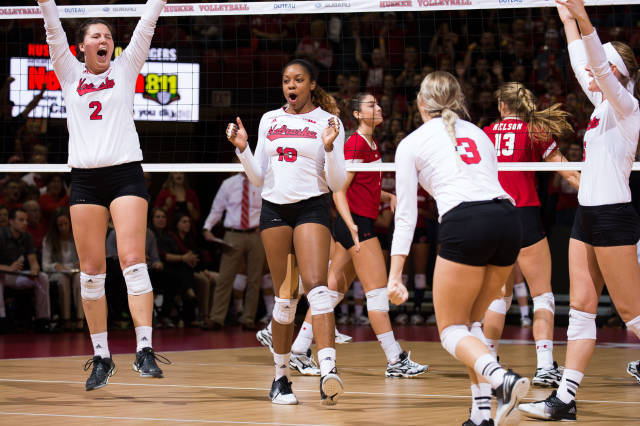 Briana Holman and Lauren Stivrins both totaled 10 kills on a .500 clip Friday evening for the Huskers. Archive Photo via Scott Bruhn

OMAHA, Neb. – The Huskers defeated the Wildcats in their first match of the Omaha Challenge on Friday evening. The last time the two met was in 2011 when Kansas State upset Nebraska in the second round of the NCAA tournament.

Nebraska and Kansas State battled the first set at 25-22, but the second set was dominated by the Huskers. A 12-2 run in the middle of the second set gave Nebraska the momentum they needed, and the Huskers came out on top, 25-11. The third set also went to Nebraska at 25-16.

The Huskers hit .323 on the match, with 47 kills on the night. They held Kansas State to a .101 hitting percentage. Nebraska also out-blocked the Wildcats 9-4.

Nebraska setter, Kelly Hunter, totaled 37 assists and 11 digs for a double-double, three kills, and two blocks. On the other side of the net, Brooke Smith and Sarah Dixon ran the offense with 14 and 12 assists, respectively. They each added three digs.

The Wildcat offense was led by Kylee Zumach with 10 kills on a .296 clip.

Both teams will continue play in the Omaha Challenge on Saturday.

The Huskers (6-2) used a strong defensive performance to roll to their sixth straight sweep. NU had a 51-29 advantage in digs and outblocked the Wildcats 9-4. After Kansas State got off to a strong start with four of the first five blocks in the match, the Huskers recorded the final eight blocks of the match.

Lauren Stivrins had career highs of 10 kills and six blocks for the Huskers. Her middle partner, Briana Holman, had 10 kills and three blocks. Both middle blockers hit .500 on the night. Mikaela Foecke and Jazz Sweet both had nine blocks with Sweet adding four blocks. Annika Albrecht had six kills and 15 digs.

Kenzie Maloney led the Husker back row with 16 digs. Kelly Hunter had 37 assists and 11 digs for her second straight double-double.

Set 1: Kansas State claimed the upper hand early with an 11-8 lead thanks to six kills on 12 error-free attacks and three blocks. Foecke and Holman struck for back-to-back kills, and KSU hit long to even the set at 12-12. After another kill by Holman and a Wildcat hitting error, the Huskers had reclaimed a 14-13 lead, their first since 6-5. With the scored tied 15-15, Sweet terminated from the right side, Hunter set Foecke for a massive back-row kill, and Sydney Townsend followed with an ace serve for an 18-15 lead. The Huskers went up 20-16 on a block by Hunter and Stivrins. The Wildcats scored four straight points to tie the set at 21-21 before serving long. Holman made it 23-21 with her fourth kill of the set, and a kill by Sweet and KSU hitting error ended the set in Nebraska’s favor, 25-22. The strong play of the Husker back row helped NU to a 16-11 edge in digs in the set.

Set 2: Foecke tallied three early kills to put the Huskers in front, 5-2. But the Wildcats responded out of a timeout with a 3-0 run to even the score. Sweet and Albrecht connected from the left side to put NU back in front, 7-5, and the Big Red dominated the set from there. Stivrins strung together a kill and a block with Albrecht on consecutive plays to make it 10-6 Huskers. Stivrins continued her impressive performance in set two with two more kills and a block with Foecke to spark a 12-2 run that put NU in control, 19-8. Albrecht served six points in the run. The Huskers finished off a resounding 25-11 win with Stivrins recording five kills and three blocks in the set, as the Huskers hit .467 and had a 4-0 edge in blocks. NU held Kansas State to .029 hitting in set two.

Set 3: Kansas State fought back in set three to take an 8-4 lead. Sweet notched a kill to get the Huskers sideout, and a block by Stivrins and Sweet and a KSU error cut it to 8-7. A kill by Hunter, followed by an ace and kill by Albrecht put the Big Red back in front, 11-10. The Huskers went up by two on a block by Holman and Sweet. The Huskers turned up their floor defense, resulting in a pair of kills by Holman and Sweet for an 18-14 advantage. NU’s run ballooned to 6-0 for a 21-14 lead after three straight KSU errors, one of which was a block by Holman and Sweet. Stivrins pounded set point for the Big Red at 24-16, and she finished off the match with her 10th kill of the night.

Up Next: Nebraska will play two matches on Saturday at Baxter Arena. The Huskers face Northern Iowa at Noon and UNO at 7:30 p.m. Both matches can be heard on the Husker Sports Network.

OMAHA, Neb. – K-State hung early in its match with Nebraska Friday, but the 10th-ranked Cornhuskers ultimately proved to be too much as the Wildcats fell in straight sets (25-22, 25-11, 25-16) at the Omaha Challenge at Baxter Arena.

K-State (6-6) matched Nebraska (6-2) point-for-point in the opening set until the Huskers closed out the frame on a 4-1 run. NU went on to claim the next two sets for its sixth consecutive win by way of a sweep.

Redshirt junior Kylee Zumach recorded 10 of the Wildcats’ 31 kills while hitting at a .296 clip. Senior opposite Bryna Vogel finished second on the team with six kills and eight digs. Libero Reilly Killeen was the Cats’ digs leader with nine while middle blocker Elle Sandbothe and Zumach each picked up a pair of blocks.

“I thought we stayed relatively composed and did some nice things early in the match,” said head coach Suzie Fritz. “When we were in good situations I thought we were really good. I think our block is getting better, we are starting to get more productive touches at the net.”

Nebraska ended the match with a .323 hitting percentage while holding K-State under .100 in the final two sets. The Huskers finished with a 51-29 edge in total digs and 47-31 advantage in team kills.

“We broke down in serve-receive,” Fritz added. “So then everything changed a little bit for us. I thought (Nebraska) served very strategically and really made some people work.”

K-State battled back from a late four-point deficit to tie the score at 21 in the opening set before Nebraska scored four of the next five to take a one set to none lead. Zumach had five kills on eight swings in the set while both Vogel and Williams each contributed three. The Wildcat defense picked up four team blocks as they out-hit NU, .231-.229, in the frame.

The Cats crawled within a point at 15-14 in the third, however, Nebraska responded with a 10-2 run to close out the match. For the second straight set, NU held K-State to a .029 efficiency.
Nebraska-transfer Brooke Smith dished out a team-best 14 assists for K-State while fellow setter Sarah Dixon had a dozen. Each also had three digs.

K-State concludes its non-conference slate on the final day of the Omaha Challenge Saturday against Northern Iowa at 5:30 p.m. Live audio from Baxter Arena will stream live on K-StateSports.com.