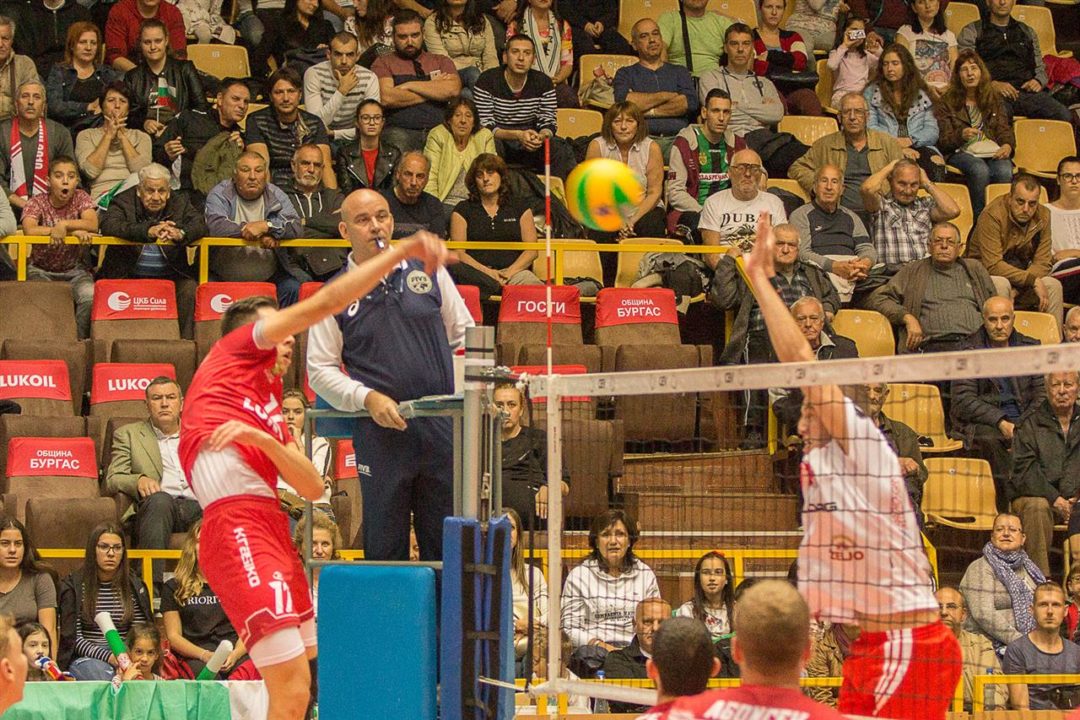 Neftohimic 2010 Burgas of Bulgaria is the first team to book a ticket to the 2nd Round of the CEV Champions League.  Current Photo via CEV

All Neftohimic had to do coming into Tuesday’s match against OK Mladost was take 2 sets. After they did so in the first sets 1 and 2, the outcome of the match up had already been determined. After getting 12 points from Georgi Petrov and 8 from Dmitry Yakolev in the first 2 sets, Neftohimic rested their starters with a wholesale lineup change. Petrov hit .615 (77%) on his way to 10 kills. He also added 2 aces from the service line. Yakolev scored on 6 kills, 1 block, and 1 ace. Iliya Petkov was a perfect 6 for 6 in attack in the middle. Petkov left the match after the 2nd set with 6 points.  Lubomir Agontsev set his team to a .522 (68%) hitting percentage when he ran the offense the first 2 sets.

Peter Hristov came off the bench to lead Neftohimic in the 2nd half of the match with 9 points. The reserve opposite scored on 8 kills and a block with a .400 (53%) attack average. Aleksandar Simeonov scored 6 points from the outside on 5 kills and 1 ace in the final 2 sets as well. His 5 kills came on 9 attempts without an attack error. Denis Karyagin came off the bench at the other outside hitter position to contribute 6 kills, 1 ace, and 1 block.

OK Mladost kept their starting lineup largely unchanged throughout the match, though they did replace Vladan Djordjevic with Jovan Cendic after the 2nd set. Cendic was impressive with 13 points on 11 kills, 1 block and 1 ace. He was also used off the bench as a substitute in the first 2 sets. OK Mladost was led by Andrija Divljan, who scored 14 points on 14 kills. He suffered a bit in attack with 6 errors and posted a .250 (44%) attack average.

Neftohimic will advance to the 2nd Round of the Champions League. They will face the winner of Vojvodina NS Seme Novi Sad of Bulgaria or Mladost Zagreb of Croatia. Those teams will play on Wednesday. Vojvodina won the first leg, but in 5 sets. The return leg will be in Serbia, so they have to be the favorites to move forward.

Ok Mladost Brcko is eliminated from the Champions League, but they will still compete in European volleyball in the form of the CEV Cup. They will take part in the 16th Finals (2nd Round) and are slated to play against Orion Doetinchem. The CEV Cup has not started yet, but the First Round will commence on November 6, 2018.