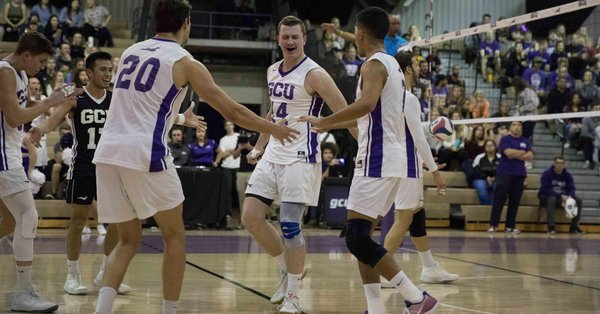 On senior night in Antelope Gym, #12 Grand Canyon knocked off in-state foe Benedictine-Mesa, who is ranked #6 in the most recent NAIA poll. Current Photo via Grand Canyon Athletics

GCU was led offensively by senior Shalev Saada with a match-high 14 kills on .524 hitting. He also added a match-high 7 digs. Senior Cullen Mosher also had an impressive attack line (8-1-9) for a .778 hitting percentage. Senior Luke Turner went 7-for-10 without a hitting error. Senior setter Puna Kaniho got the start and dished 11 assists, while senior setter Zachary Melcher set the final two stanzas with 23 assists and led the team to a .585 hitting percentage in those two sets. Melcher also posted a match-high 2 aces.

The Redhawks were led by senior outside hitter Logan Adcock with 11 kills on .556 hitting. Senior middle blocker Devin Hill added 8 kills on .333 hitting with a match-high 4 blocks. Junior setter Jaron Jones finished with a match-high 28 assists, leading the Redhawks to a .250 hitting percentage. Libero Jesus Izaguirre led Benedictine-Mesa with 3 digs.

Grand Canyon’s senior class leaves behind quite a legacy. During their time in Phoenix, the Lopes got to the MIVA finals in 2017, earned a spot on the AVCA Division I-II top 15 poll for the first time (2017), spent every poll of 2018 in the top 15, and had the best four-year win total in program history. Their wins over Pepperdine and USC this season also give them a chance for a favorable match-up for the MPSF tournament, which starts next week.

The Lopes final match of the regular season is against USC in Antelope Gym on Friday, April 6.

PHOENIX – On a night honoring their nine seniors, Grand Canyon men’s volleyball team came away with a sweep over in state opponent, Benedictine-Mesa. Set scores were 25-20, 25-15 and 25-23. GCU snaps a two game losing streak and improves to 17-10 on the year while the Redhawks fall to 17-6.

Before the match started, seniors: Jerod Alleman, Shalev Saada, Cody Williams, Luke Turner, Zachary Melcher, Ashton King, Puna Kaniho, Sky Engleman, and Cullen Mosher where honored for their time at GCU. The senior class helped shape the Grand Canyon men’s volleyball program into what it is today by accomplishing feats such as, reaching the MIVA Finals in 2017, earning a spot on AVCA’s Division I-II Top-15 Coaches Poll, cracking the Preseason Top-15, staying ranked every week in 2018 and having the best four-year win total in program history.

“I am very proud of this group of men.” Said head coach Matt Werle when asked about the seniors. “They have come far in their careers as players and as men. They helped lay the foundation for the future of this program and set the standard that we preach. I cannot wait to see what the future has in store for each of them.”

Every senior would see playing time on the night as the Lopes led the Redhawks on most of the stat sheet. GCU recorded 43 kills, three aces, two blocks, 40 assists and 18 digs while hitting at a .457 mark. Benedictine-Mesa out blocked the Lopes eight to two and tied in aces.

Saada made the most of his night, leading the Lopes in kills and digs with 14 and seven respectively in addition to a .524 hitting percentage. Melcher played two sets and led the home team in aces with two and assists with 23 while Kaniho earned the start and recorded 11 assists. King and Mosher split the lead in blocks with one apiece, both solo efforts. Turner added seven kills on a .700 mark and Alleman joined in with five kills on five attempts for a perfect hitting mark. Engleman was second on the team in digs with three and recorded three assists as well. Redshirt freshman Ian McClain joined in on the senior night festivities, making his GCU debut and earning a third set start.

The first set had an eerie feeling to start when the Redhawks jumped out to a 6-3 lead. The feeling dissipated when the Lopes responded with a 3-0 run kicked off by a kill from Alleman. From there it was all GCU. A Saada kill gave them momentum and a lead they would not yield despite a late comeback attempt from Benedictine-Mesa. Up 23-20, Saada landed a kill and Alleman followed suit with one of his own from Mosher, ending the set 25-20 in GCU’s favor.

The second set was nothing short of impressive fror GCU, using multiple scoring runs and a .706 hitting percentage to fuel a 25-15 win. The Redhawks would be held to a .087 percentage.

Set number three saw GCU up 4-2 thanks to three straight Saada kills. However, unlike the previous set the Redhawks responded in a big way, fighting their way to a 17-14 lead. Down three, Melcher sparked the offense with a deceptive kill and Saada kept it going with another kill to tie it up after a Redhawk error. The visitors found themselves with another lead, this time 21-19 but committed two errors to bring the score even once again. The Lopes battled back to take the lead and a Redhawks service error followed by a kill from Turner ended the set and the match, capping off senior night.

“Senior night is always special and I am glad the night went the way it did.” Added Werle. “We were able to execute some things we have practiced but still have work to do this week ahead of USC. We need to stay sharp and fix our mental errors as we end MPSF regular season play.”

BenU Mesa started out strong in the first set, leading 6-3 in the early going. But the Antelopes battled back and stole the first set from the Redhawks to take a 1-0 lead.

Grand Canyon would use that momentum to take set two and take a 2-0 advantage. But the Redhawks weren’t done yet, going point for point with the Antelope in the third set, even holding a 21-19 lead after a kill from Devin Hill.

However, BenU Mesa was unable to keep the momentum in the final points, dropping their final regular season match of the season.

Logan Adcock led the attack with 11 kills, while Jaron Jones ran the offense to the tune of 28 assists.

The Redhawks now travel to Ohio and take on Siena Heights in the semi-finals of the NAIA-Independents Qualifying Tournament hosted by Lourdes University on Friday afternoon. First serve is scheduled for 1:00 p.m. MST.