No. 10 Oregon Cruises to Sweep of UTRGV in Home Opener 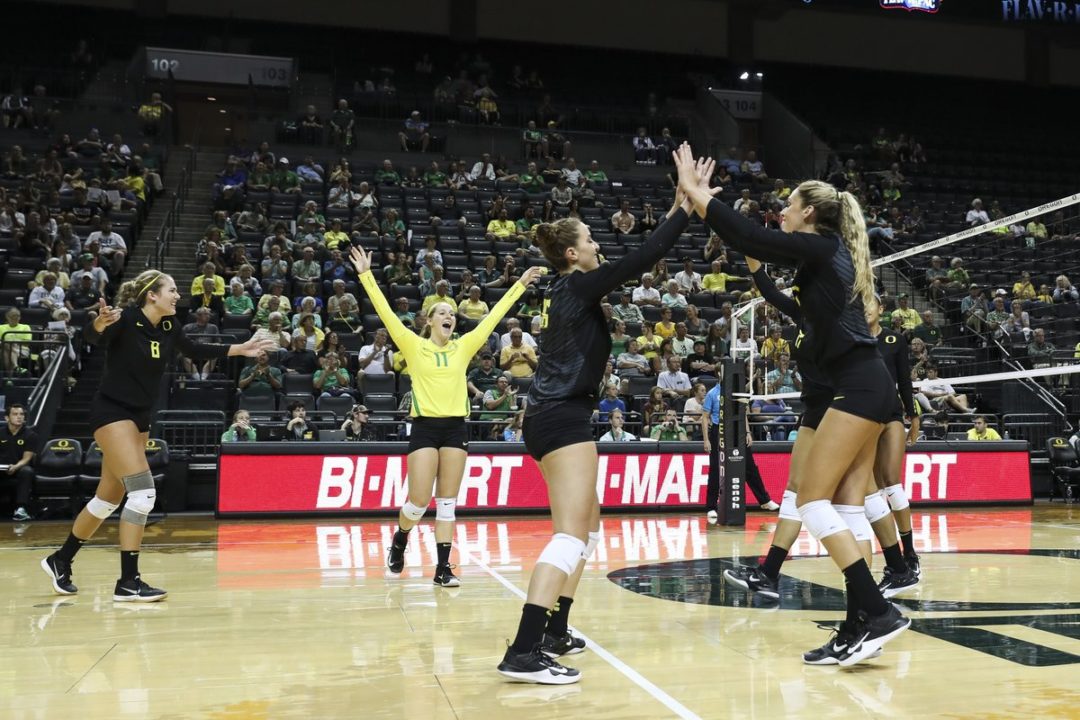 The No. 10 Ducks hit nearly .400 in two of the three sets of a sweep of Texas-Rio Grande Valley in their home opener Thursday, en route to a .337 efffort for the night.  Current Photo via Oregon Athletics

The No. 10 Ducks hit nearly .400 in two of the three sets of a sweep of Texas-Rio Grande Valley in their home opener Thursday, en route to a .337 efffort for the night.

Lindsey Vander Weide guided the ship for the Oregon with a match-high 12 kills, team-best seven digs and an ace. Four other places managed at least four kills in the match: Taylor Agost (9), Willow Johnson (7), Lauren Page (5) and Ronika Stone (4). Stone also chipped in four aces and three blocks. Sumeet Gill led the team at the net with four stuffs, while August Raskie joined Vander Weide with a team-leading seven digs.

Ragni Steen Knudsen and Barbara Silva paced the Vaqueros with 12 and 10 kills respectively. Knudsen also served up both of the team’s aces and added a team-leading six digs. Gysell Zayas also turned in six digs.

The Ducks set the tone from the start with an 8-0 run, including three aces by Stone, which put them on top 9-2. Oregon did not let its foot off the gas, vaulting ahead by 11 at 20-9. Five different players posted kills in the stretch, while the Ducks also benefitted from a handful of Vaquero miscues. UTRGV scored four of the next five points, with two kills a block by Silva, cutting the margin to eight at 21-13, but could not get any closer. A Vander Weide putaway clinched the win at 25-16.

The Vaqueros took an early 4-2 lead in Set 2 as Knudsen served up two aces. Oregon turned the tables with a 6-2 run to go ahead 8-6. The teams tied at 8-all, but the Ducks soon led by three at 13-10. UTRGV scored four straight to grab the lead. Down 18-17, Oregon put together a final 8-2 run to pull away and boast a 2-0 lead heading to intermission. The Ducks again used balanced attack with kills by five different players down the stretch.

The Ducks raced out to a 7-2 advantage in Set 3 as UTRGV struggled to find its footing, committing four hitting errors. Oregon pushed the margin to seven at 15-8 with help from three more Vaquero errors and a pair of blocks by Stone and Page. UTRGV would get no closer than five the rest of the way. The Vaqueros committed 12 errors in the final stanza.

The 14th-ranked Oregon volleyball team came away with a sweep in its home opener on Thursday night, taking down the University of Texas Rio-Grande Valley in straight sets, 25-16, 25-20, 25-17, to kick off the Oregon Classic at Matthew Knight Arena.

The Ducks (2-1) got off to a fast start and played efficient volleyball from start to finish, hitting .337 as a team while holding the Vaqueros (1-3) to a .160 clip. Oregon once again featured a balanced attack, with eight players recording kills and all 12 Ducks who were available getting onto the court.

How it Happened: The Ducks used an early 8-0 run, fueled by a trio of aces by Ronika Stone, to take a commanding 9-2 lead and force UTRGV into its first timeout. Oregon would extend its lead to 20-9, and the Vaqueros would get no closer than eight points before the Ducks took the set and a 1-0 lead. Lindsey Vander Weide led all players with six kills while leading the Ducks to a .444 team hitting percentage in the opening set.

The Ducks and Vaqueros went back and forth in set two en route to a 17-17 tie before Oregon used three straight points to move ahead, 20-18. After a UTRGV timeout, the Ducks finished the set on runs of 8-2 and 4-0 to take a two-set advantage in the match. Willow Johnson was stellar in the set with five kills on eight swings, while Vander Weide put down four.

Oregon was in control of the final set from the start, jumping out to a 9-4 lead. The Ducks would extend their lead to 22-13 while forcing UTRGV into burning both timeouts, and a pair of Vaquero errors ended the set and clinched the sweep for Oregon. The Ducks held UTRGV to a hitting percentage of .000 in the final set.

Who Stood Out: Vander Weide led the Ducks with 12 kills and seven digs, while Taylor Agost enjoyed an efficient night with nine kills on .400 hitting. Johnson put down seven kills on .462 hitting with just one attack error, and Stone recorded a career-high four aces to go with four kills on six swings. Maggie Scott and August Raskie combined for 37 assists, and Sumeet Gill paced the Ducks to 14 blocks with a team-high four.

On the win… “I thought our energy was good. We had a little lull in the second (set). I thought Ronika (Stone) started us off with her serving run and that really set the tone from the match.”
On using 12 players tonight… “We have a small roster right now that can play, so everybody that was healthy played tonight. We’re going to need every healthy body to be good this season, so I was proud for the contributions of everybody that got in.”

Notable: The Ducks finished with six aces as a team to UTRGV’s two … Oregon held UTRGV to under .200 hitting in two of the three sets … Jolie Rasmussen started the match and recorded her first kill of the season while playing the first set as she makes her way back from injury.

UTRGV kept the second set tight throughout, scoring three-straight points to take a 4-2 lead on a kill and a pair of aces by Knudsen. Oregon scored the next three to go up 5-4 on a Willow Johnson kill, but UTRGV tied the set at 5 on a Silva kill and 8 on a Knudsen kill. UTRGV regained the lead at 14-13 on a block by senior Bojana Mitrovic and freshman Veronika Jandova. UTRGV also led 16-15 and 18-17 following attack errors, and was within one at 20-21 on a Knudsen kill, but Oregon scored the final four points of the set.

Oregon jumped out to an 11-3 lead in the first set and a 7-2 lead in the second set to wrap up the match.

UTRGV is back in action on Friday at 8 p.m. against Northern Illinois.