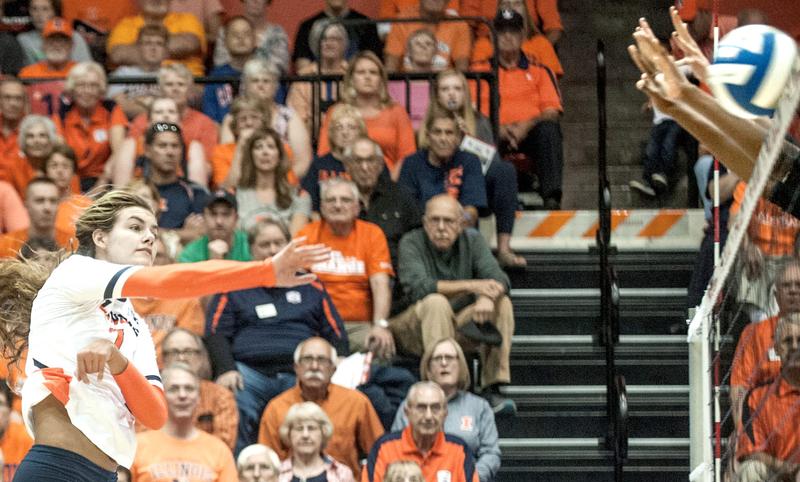 No. 11 Illinois started opening day with a sweep of UNC Wilmington and closed out a 2-0 effort in Fort Collins, Colorado, by outlasting homestanding Colorado State (RV) in five sets.  Current Photo via Illinois Athletics

No. 11 Illinois started opening day with a sweep of UNC Wilmington and closed out a 2-0 effort in Fort Collins, Colorado, by outlasting homestanding Colorado State (RV) in five sets.

No. 11 Illinois opened the season with a sweep of UNC Wilmington featuring junior outside hitter Jacqueline Quade‘s offensive prowess to the tune of a match-high 15 kills.

How It Happened: Quade started the match with back to back kills leading the Illini to an early 6-2 edge. Illinois held on from there, upping the advantage to seven at 19-12 and then closing out the set on a 6-1 run.

UNC Wilmington led briefly in Set 2 at 6-4, but Illinois countered with eight of the next 10 points, including three Quade terminations to go up 12-8. The Seahawks knotted things up at 14-all, before the Illini pulled away with a 6-1 run and two Jordyn Poulter aces. UNCW was within two at 24-22, before Bastianelli ended the stanza.

The Fighting Illini cruised to a 12-5 advantage with two kills each from Quade, Poulter and Bastianelli. Montgomery brought UNCW within four at 14-10, but Illini added five of the next seven points. Three Seahawk errors down the stretch helped wrap up the 25-16 win and the match.

Key Stats: UNCW got off to a rough start, hitting -.121 in the opening set, but pushed Northern Colorado to the limit in a three-set loss on Friday.

How It Happened: Northern Colorado scored 11 of the final 12 points in a 25-10 Set 1 victory with help from five UNCW miscues.

In Set 2, the Bears built a 7-2 lead with kills by four different players. Two Lockey kills and three Seahawk errors had Northern Colorado up 15-9 midway through. A 7-3 run made it 24-16, but UNCW wasn’t done yet, rallying to within three before falling on a hitting error.

The Bears wrapped up the match by rallying from down 16-13 for a 25-22 win. An 8-3 run including two kills each by Lockey and Hinrichs lifted Northern Colorado to a 21-19 edge. The Bears held on from there, scoring the final three points including back to back kills by McCartney to seal the victory.

Key Stats: Illinois put up 13 blocks and outdid Colorado State 59-44 in kills to highlight a five-set victory. The Fighting Illini outhit the Rams .176 to .137 and boasted defensive advantages in blocks (13-10) and digs (64-48). CSU outserved Illinois 8-6. Illinois hit at a match-best .296 clip with 12 kills in the final stanza, while Colorado State managed a .158 effort and six putaways.

Stat Leaders: Jacqueline Quade downed 22 kills and served up two aces to lead Illinois to victory. Megan Cooney (13) and Blayke Hranicka (11) rounded out the Illini attack, although neither hit better than .200. Setter Jordyn Poulter managed a double-double with 46 assists and 15 digs, while Ashlyn Fleming put up a team-best seven blocks and Ali Bastianelli chipped in six stuffs.

How It Happened: A 9-4 run in Set 5 helped lift Illinois past Colorado State to close out opening day. The rally turned a 4-3 lead into a 13-7 advantage, putting the match out of reach for the homestanding Rams. Five different players turned in kills, including two each by Hranicka and Quade. The Rams kept the match going with a kill by Runnels and an Illini hitting error. A Cooney kill set up match point, but it would take three more points for her to get another and close out the victory.