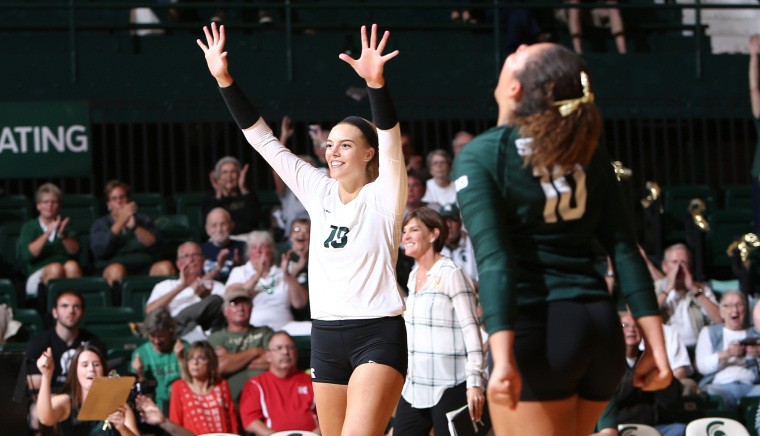 In the first set, the teams exchanged points back and forth, until 12 all, when a Rutgers service error and a Chloe Reinig block and kill put Michigan State ahead by three. From there, the Spartans took off, expanding their lead to 18-13, eventually ending the set 25-15.

The second set was like the first up until 5-4, when Michigan State went of a run leading 10-5. The run continued until the Spartans were ahead 20-11. A 5-2 run at the end put Michigan State ahead 2-0 in the match.

In the third, the Spartans held a 22-14 lead over the Scarlet Knights, two kills and an ace led Michigan State to the set and match.

For the Spartans, Chloe Reinig and Holly Toliver each put down 10 kills, while Allyssah Fitterer and Autumn Bailey each added six. Michigan State hit for .463 against Rutgers, their season-best.

Meme Fletcher led the way for the Scarlet Knights with 10 kills and two blocks. Rutgers posted a season-high five aces against the Spartans, with Taija McKnight posting her career-best two aces.

Chloe Reinigand Holly Toliver each had 10 kills on the night, andAllyssah Fittererand Autumn Bailey each had six for MSU, which hit .463 as a team, a new season high. Toliver registered a career-best .533 hitting percentage, one of five players with five kills or more who hit .500 or better on the night. Meme Fletcher led the Scarlet Knights with 10 kills, two blocks and three digs.

MSU heads on the road to Columbus on Saturday for a rematch with No. 19 Ohio State, a team MSU swept earlier this season in East Lansing. The match is a 6 pm start time at St. John Arena.

Junior outside hitter Meme Fletcher led RU with 10 kills in the match, along with two blocks. Senior right side Lauren Cloyd followed with five kills of her own.

The Spartans were led by Holly Toliver with 10 kills to go with a .533 hitting percentage. Chloe Reinig also added in 10 kills and a .500 hitting clip to guide MSU.

Rutgers and Michigan State opened set one trading points with neither team generating a margin larger than one point. After nine ties on the board, an ace for sophomore middle blocker Tiaja McKnight put the Scarlet Knights in front, 10-9. The score would be tied on three more occasions before the Spartans tacked on three consecutive points to generate a 16-12 edge, the largest for either side during the span. Although a Cole Trimble kill ended the run, MSU held a lead for the remainder of the set en route to a 1-0 advantage.

Although Rutgers kept the margin within one at 5-4 at the start of the second frame, it was as close as the Scarlet Knights would come. From there, Michigan State never let up control of the scoreboard, claiming its second consecutive set win in the contest. Moving into the third, MSU’s momentum kept RU out of its groove. The teams traded points late in stanza, but the margin was too large for the Scarlet Knights to overcome as the Spartans picked up the victory in the third and final set to close the match.

UP NEXT
Rutgers welcomes Maryland to the College Ave Gym on Saturday, Oct. 22 for its annual PINK OUT for Breast Cancer Awareness. First serve is set for 7 p.m. on BTN Plus.