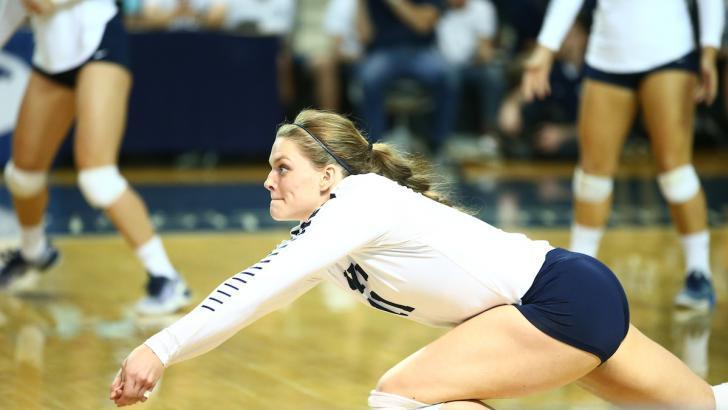 The BYU Cougars beat the Santa Clara Broncos in a three-set victory, handing Santa Clara its fourth straight loss after opening its season 6-0. The win for BYU marked its third consecutive sweep since losing to Utah.

Defensively, the Cougars relied on Whitney Howard Young who collected 4 blocks and Mary Lake who had 11 digs. Santa Clara did outshine BYU in blocking: both Anna McCreadie and Hailey Lindberg had 5 assisted blocks, while Jensen Cunningham had 3 assisted blocks and one solo block. Jones had the most digs for the Broncos with 8.

BYU will play another home match against San Francisco this Saturday, while Santa Clara will travel again and face No. 7 San Diego on Saturday at 12pm.

“I loved the team effort tonight,” BYU head coach Heather Olmstead said. “A lot of people stepped up. We talked about staying calm when we were down and just battling. I thought we battled in the second set and that was really good for us to have to go through.”

Lacy Haddock finished with a career-high 14 kills on a .407 clip while McKenna Miller added 12 kills. Mary Lake tallied a team-high 11 digs and Lyndie Haddock and Hannah Robison both had eight. Whitney Young Howard contributed four blocks and seven kills in the win.

BYU (12-1, 1-0 WCC) jumped to a quick 7-2 lead in the first set to force a Santa Clara (9-3, 0-1 WCC) timeout early in the match. Two back-to-back kills by Santa Clara and a BYU error cut the Bronco deficit to three. The teams continued to trade points, but the Cougars held on to 16-10 advantage after three Bronco miscues. BYU continued to dominate as a Taylor Odom kill pushed the Cougars’ lead to 20-15. The Broncos countered with four of the next ten points, but it wasn’t enough to hold back the BYU offense. A block by Lacy Haddock won the set for BYU, 25-19.

Feeding off energy from the first set, the Cougars scored the first three points of the second set. The Broncos tied the set at 4 apiece before getting their first lead of the night on a BYU error. An ace by Lyndie Haddock helped the Cougars take back a 9-8 lead, but it didn’t last for long as Santa Clara went on a 5-0 run to force a BYU timeout. A Howard kill then sparked a 6-2 Cougar run to get back in the game. Hannah Robison earned the Cougars’ fourth ace of the night to help BYU pull ahead 18-15. After a Bronco timeout, the Cougars blocked two-consecutive hits to bring the score to 22-16. The Broncos wouldn’t give up as they fought back to tie the score at 24-all. The Cougars ended the set in extra points, though, on a Lacy Haddock kill, 29-27.

The beginning of the third set proved to be a close contest with the score tied 7 apiece. A kill by Lacy Haddock gave the Cougars momentum to score the next two points. Both teams rallied back and forth before a Sophie Hartsock kill extended BYU’s advantage at 15-13 going into a media timeout. A Santa Clara attack error then pushed BYU’s lead to 19-15. The Cougars capitalized on Bronco attack errors to maintain an advantage and won the match point 25-17 on a Robison kill.

The Cougars host San Francisco Saturday, Sept. 24, at 1 p.m. MDT. The match will be streamed live on TheW.tv. Links to live stats and a video feed can be found on the BYU women’s volleyball schedule page.

PROVO, Utah — In its 13th straight match away from home to start the season, Santa Clara volleyball was swept by No. 13 BYU Thursday night. The Broncos and Cougars met up for the first West Coast Conference match of the year at Smith Fieldhouse.

Lacy Haddock had a match-high 14 kills for the Cougars (12-1, 1-0 WCC) and her twin sister Lyndie Haddock led all players with 38 assists. Mary Lake turned in a match-high 11 digs.

BYU got out to a fast start in the first set by winning three of the first four points and using a 5-0 run, including two kills and a block solo by Whitney Howard, to take an 8-2 lead. Trailing 10-3, the Broncos won six of the next seven points to cut the deficit to 11-8; Sabrina Clayton had three of her five first frame kills during that stretch. Lacy Haddock closed out the set with a block of Lindberg.

Santa Clara seized the early lead in the second frame, and led by as many as four at 12-8 after winning five points in a row. The Cougars took 13 of the next 18 points to pull in front 21-17 and outlasted the Broncos to claim the 56-point set prior to the break. The Broncos outhit the Cougars .188 to .102 in the second stanza, in which BYU committed 13 attack errors.

The Cougars hit .438 in the final frame en route to completing the sweep. Neither side went up by more than two until late in the set, when BYU led 17-15 and used an 8-2 stretch to complete the victory.

Thursday marked the first sweep defeat for Santa Clara in 36 matches going back to a loss against No. 4 Texas on Sept. 11, 2015. The Broncos held without an ace for the first time in 45 matches since an NCAA Tournament contest against Oregon on Dec. 4, 2014.

Santa Clara plays its second straight road match against a ranked opponent when it heads to San Diego for a Saturday tilt with the No. 7 Toreros at Noon.