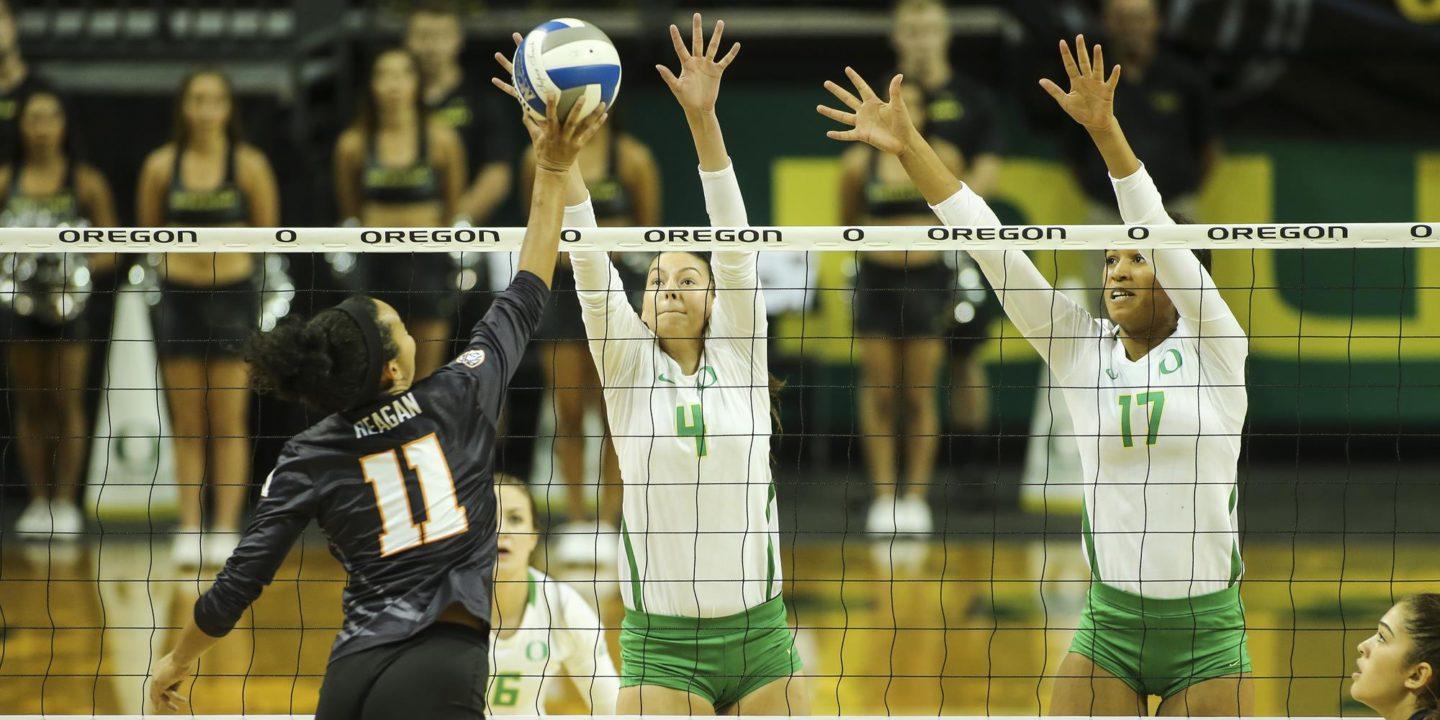 Offensive leaders for the Ducks were Jolie Rasmussen and Ronika Stone who each had 11 kills. August Raskie also had 26 assists for Oregon. The bright spot for Oregon State was Mary-Kate Marshall who notched an impressive 20 kills. McKenna Hollingsworth also collected a match-high 29 assists.

On defense, Oregon’s Stone had the most blocks on the court with 6, while Amanda Benson led the match in digs with 23. Hollingsworth, Serena Bruin and Jessi Seumalo each had 2 blocks for the Beavers, while Marshall and Kayla Ellis led their team in digs with 11 apiece.

EUGENE, Ore. – Oregon volleyball continued its hot play into its Pac-12 opener with Oregon State on Thursday, sweeping the Beavers, 25-13, 25-21, 25-16, to extend its winning streak to eight matches in front of 1,683 at Matthew Knight Arena.

How It Happened: No. 24 Oregon (8-2, 1-0 Pac-12) dominated the opening set and staved off Oregon State (7-5, 0-1 Pac-12) rallies in the next two en route to its eighth straight win. Oregon has now won 15 straight sets and 24 of its last 25. The Ducks held the Beavers to a .163 hitting percentage, led by a season-high 23 digs by senior libero Amanda Benson, while hitting .359 behind 11 kills each by freshmen Jolie Rasmussen(.417) and Ronika Stone (.476), with Stone leading the match with six blocks. Lindsey Vander Weide added nine kills and dug 10 balls, freshman Willow Johnson put down eight kills on 13 swings (.538) and sophomore August Raskie produced her first career double-double with a career-high 11 digs and a season-high 26 assists.

Set 1: The Ducks were in control from the start of the set, jumping out to a 11-3 lead with Stone putting kills down on her first two swings. After a 3-0 Oregon State run trimmed the Oregon lead to 14-9, kills by Rasmussen and Stone swung the momentum back in the Ducks’ favor and forced the Beavers to take their second timeout. Oregon then closed the set out on a 9-4 clip. Stone and Johnson each paced the Ducks with five kills, while Benson was all over the place with 10 early digs.

Set 2: After the two teams played to an 10-10 tie, a 4-1 Oregon State run forced a timeout by the Ducks. The Beavers scored three of the next five points to go up 17-13, but the Ducks responded with a furious 11-1 run to take a 23-18 lead, started by three straight Rasmussen kills. The Beavers took their second timeout and came back out with three straight points to trim the Oregon lead to 23-21, but a block by Nady and Stone followed by a Nady kill gave the Ducks a 25-21 win. Lauren Page led the Ducks with five kills on eight swings, Rasmussen and Stone each added four and Benson dug 10 balls for the second straight set.

Set 3: Oregon came out of the intermission swinging, jumping out to an 8-2 lead to force a Beaver timeout behind three Rasmussen kills. The Ducks didn’t slow down out of the timeout, scoring nine of the next 13 points to extend their lead to 17-6. Oregon State started to find its groove and got within 21-15, but the Ducks ended the match on a 4-1 run to win the set, 25-16. Vander Weide led the Ducks with six kills, while Rasmussen added five to help the Ducks hit .429 in the final game.

Nothing Gets By Benson: In her final season as a Duck, Benson has been all over the floor through the first ten matches. The Litchfield Park, Ariz. native entered the night leading the Pac-12 with 4.83 digs per set, and improved that mark to 5.09 digs per set after her 23 against the Beavers. Head coach Jim Moore has consistently referred to Benson as the most valuable player on the court, and that seemed apparent on Thursday as Benson dug everything that came her way without making a receiving error.

Quotes:
Head Coach Jim Moore
General thoughts on trouble during the second set…
“We lost our focus twice and that is going to be our key. I really like the way we come out, we came out great, they were in it and they played much better at the start of the second set and then it was serving. We lost two of the first three serves, and it changed the complexion of the match.”

On Ronika Stone, Jolie Rasmussen and Willow Johnson in their first Pac-12 match…
“Thirty kills and three errors, not bad for freshmen. We knew they were good. They have confidence, and they’re where they are for a reason.”

On the eight-match winning streak after starting 0-2…
“That was all emotion that first weekend. It was great for us actually because we learned our lesson. For the freshmen, they found out real quick it had nothing to do with their physical ability but a lot to do with the other stuff. I knew we would be fine. It’s a long ways to go, and we have to get a lot better. Our offense needs to get a lot better and the blocks have got to get better.”

Ronika Stone, Freshman
On playing in her first civil war…
“Playing in my first Civil War was crazy. The band really got us hyped in the beginning so we were really excited to come out.”

On the match…
“We started off really good and we focus that we needed too. We slipped a little in the second game but we were able to finish strong.”

Marshall hit .400 in the match, recording just errors over 45 total attacks. Her 20 kills put her at the 20-kill plateau for the fourth time this season and second time over the Beavers’ last three matches.

The double double was her third of the season.

Over her last five matches, Marshall, who is less than 40 kills away from breaking into Oregon State’s top 10 for a career, has 84 kills, or an average of 5.25 per set.

Lanesha Reagan also had nine kills for the Beavers, who hit .163 as a team against the Ducks. Oregon finished with a .359 attack percentage. Reagan was one shy of a double double as well, finishing with 10 digs.

Kayla Ellis tied Marshall for the team lead with 11 digs, while McKenna Hollingsworth had 29 assists to pace the Beavers.

The match was the first of the season involving the Beavers (7-5 overall) and Ducks (8-2) in the Civil War, presented by PacificSource Health Plans, Spirit Mountain Casino, Safeway/Albertsons and Your Local Toyota Dealers. The teams will meet again in the regular season finale Nov. 25 in a match at Gill Coliseum that starts at noon.

Oregon State returns home Friday night for a 7 p.m. PT matchup with Stanford at Gill Coliseum. Tickets are available for the match and can be purchased by visiting BeaverTickets.com, by calling 1-800-GOBEAVS or in person at the Gill Coliseum ticket office.