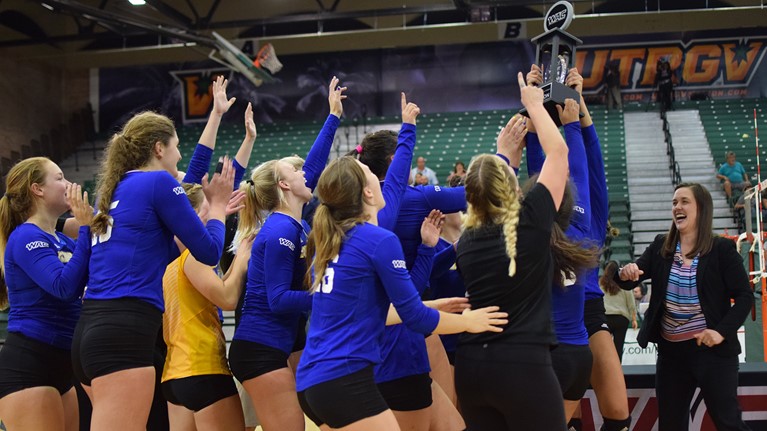 Cal State Bakersfield finished off a title run through the WAC Tournament with a four-set win over No. 2 seed Texas-Rio Grande Valley on Saturday.  Current Photo via Western Athletic Conference

Cal State Bakersfield finished off a run through the WAC Tournament with a four-set win over No. 2 seed and tournament host Texas-Rio Grande Valley on Saturday.

The victory, the Roadrunners’ second upset in as many days, secures the team its first NCAA Tournament berth since 2014. 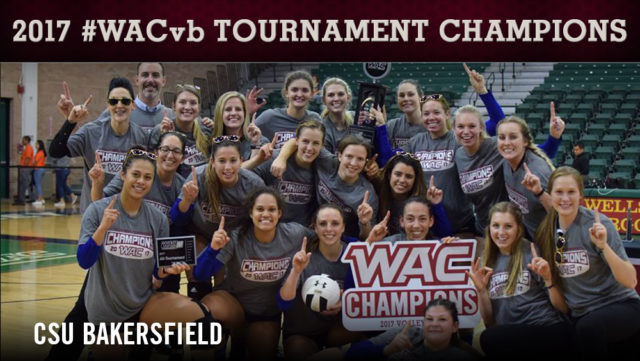 It Was Over When: After nine ties, last at 11, Bakersfield pulled away with an 8-2 run. Mariner turned in three kills and a block, while three UTRGV errors also aided the Roadrunner charge, which made it 19-13. UTRGV was within four twice, last at 21-17, but CSUB wrapped up the set on a 4-1 run. A Sydney Wicks ace and Haynes kill set up the final point, which came on a Knudsen hitting miscue.

After pulling the upset on Friday night in the semifinals over Western Athletic Conference Champion New Mexico State, the CSU Bakersfield volleyball team was looking for back to back upsets and an automatic bid to the NCAA tournament with a victory over tournament host and second seeded UTRGV.

Djordjevic gets the set winning kill and after three gets her third consecutive double-double of the tournament.  10 digs and 11 kills. Lopes, who did not make the first or second All WAC Conference team, had 15 digs through three sets and the senior is now fifth all time in WAC history for digs in a season.

The fourth set, as expected, was back and forth and was tied every time all the way to 7-7.  UTRGV would take a timeout with the `Runners taking a 13-11 lead.  CSUB would go on a 4-1 run and force UTRGV to take their final timeout with the `Runners leading 17-12.  `Runners took a 20-14 lead, but back to back UTRGV points and CSUB would take a timeout with a 20-16 lead and five points away from the NCAA tournament.  The `Runners would go on and win the WAC tournament with a 25-18 victory in the fourth set and earn the automatic bid to the NCAA tournament.  The `Runners won three consecutive sets to win the Championship, 25-27, 25-18, 30-28, 25-18.

CSUB was led by Haynes 19 kills, Djordjevic ends the match with 14 kills and 12 digs and Lopes had 19 digs.  Djordjevic was voted WAC tournament Most Valuable Player and deservedly so.

Giovana Melo, CSUB’s Director of Volleyball received a Gatorade bath right before being interviewed.  After drying off, Melo was asked what it meant to her and the girls.  Melo said, “I’m seriously out of words.  The girls have fought so much throughout the whole year and it means everything.  It means a lot to me because of them.”

The crowd of 1,634 fans at the championship match is a UTRGV record for a volleyball match and those fans were treated to an instant classic.

The second-seeded University of Texas Rio Grande Valley (UTRGV) volleyball team fell to fourth-seeded CSU Bakersfield 1-3 (27-25, 18-25, 28-30, 18-25) in the Western Athletic Conference Tournament Championship match on Saturday at the UTRGV Fieldhouse in front of record crowd of 1,634.

In this match, Knudsen led UTRGV with 18 kills and 11 digs for her 10th double-double of the season. Sophomore Barbara Silva recorded 11 kills on .308 hitting with a season-high six blocks. Junior Alexandra Ecker posted a season-high tying eight blocks.

CSU Bakersfield led by as many as five in the first set, going up 11-6. UTRGV responded by winning the next four serves as part of a 6-1 run to tie the set at 12. Neither team led by more than two the rest of the way. CSU Bakersfield had the first crack at set point, going up 24-23 on a Djordjevic kill before a Silva kill and an ace by freshman McAllen alum Kellie Woodin put UTRGV up 25-24. One serve later, with the set tied at 25, Mitrovic and junior Dubravka Vukoja came up with kills to end the set.

The second set was tight early, with UTRGV going up 15-14 on a Mitrovic kill. Haynes responded with four kills as CSU Bakersfield won six-straight serves to spark an 11-3 run to end the set.

CSU Bakersfield’s momentum carried over to the third set, as the team ran out to a 17-8 lead. That’s when UTRGV caught fire, scoring six-straight points as part of a 13-3 run to take a 21-20 lead. CSU Bakersfield won four of the next five serves to get to set point at 24-22. A Knudsen kills and an attack error allowed UTRGV to tie the set. UTRGV ended up successfully defending on set point four times, before reaching set point at 28-27 on an ace by sophomore Julia Moctezuma. Haynes and Briannah Mariner responded with a block and then Haynes and Djordjevic came up with kills to end the set.

The fourth set was close early, as a kill by freshman Los Fresnos alum Jackie Kingsbury tie the set at 11. CSU Bakersfield, however, won eight of the next 10 serves while closing the match on a 14-7 run.