No. 4 Texas Rolls Past Baylor In Four 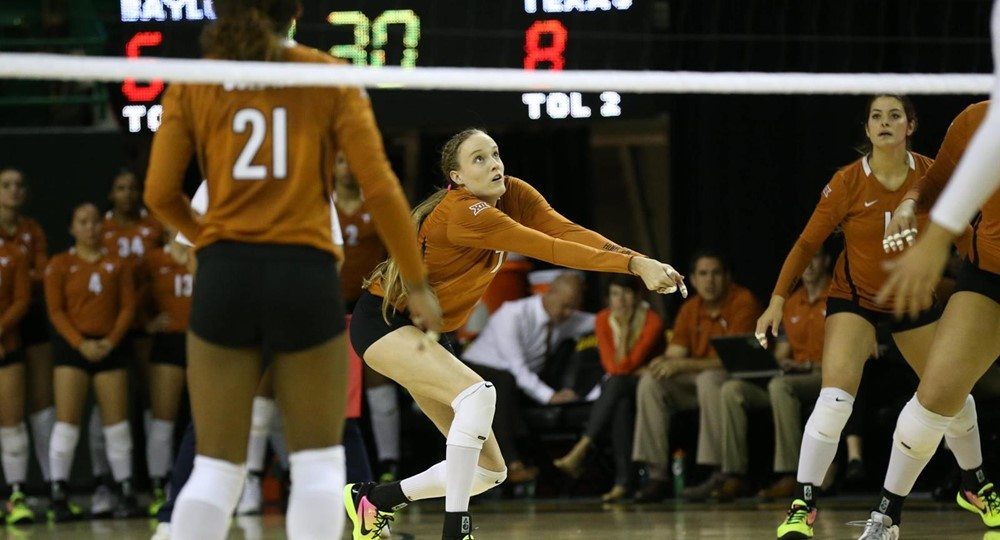 Dominating for the Bear, Katie Staiger put down 25 kills and 10 digs for a double-double. Setter Morgan Reed dished out 40 assists and eight digs.

Sophomore Yaasmeen Bedart-Ghani finished with 10 kills on 12 swings with no errors for a career-best .833 hitting percentage.

Bedart-Ghani also led the Longhorns in blocks with a career-high nine, including three solo.

Junior Ebony Nwanebu and freshman Micaya White led Texas in kills with 16 each, Nwanebu’s coming on 29 swings to hit .483. She also added six digs, three blocks and one ace in the match.

Senior Paulina Prieto Cerame rounded out the double-digit kills for the Horns with 12, hitting .250, three digs and a season-high five blocks.

Senior Chloe Collins her sixth match with 50 or more assists with 50, also with six digs, three blocks and two kills.

Baylor jumped out to an early 4-1 lead in the first set, but kills from Nwanebu kept Texas close and the Longhorns chipped away to tie the score at 7-7. From there, they tied eight times until the Bears went on a 5-1 run to take a 23-19 lead and closed out set one, 25-21.

In the second set, neither team led by more than two until Texas executed a 4-1 run to take a 9-6 lead and followed with a 4-0 run to stretch its lead to 14-9. The Bears fought back with back-to-back points, but the Horns would not let Baylor back in to take set two, 25-17.

Texas will hit return to Gregory Gym to host TCU on Wednesday, Oct. 19. The match will be televised live on Fox.

On the match: I felt really good out there tonight. My teammates really helped me and gave me a lot of support.

On the transition to the middle: I feel better with more practice. It hasn’t been as difficult as I thought it would be. I have a little bit more to worry about on the blocking front and don’t have as much time to hit…the vision and angles are a little different, but I’m really enjoying it.

Baylor came out ready to make a statement, beginning the match with an Ashley Fritcher kill and a Jana Brusek service ace that would give the Bears the lead until the Longhorns tied it up at 11-11.

Rallying from a two-point deficit, Baylor fought back to tie it on another Fritcher kill at 18-18. Katie Staiger’s 10 kills helped the Bears to take the first set, 25-21.

Throughout the opening set, the Bears looked electric, moving the ball well on offense, swinging hard at every ball and diving all over the court to keep themselves in the game.

And then, they weren’t.

Texas used a 4-1 run to take control of the second set and knotted the match at 1-1 with a 25-17 win by answering everything the Bears threw at them.

Senior Morgan Reed racked up 40 assists on the night. And even though it wasn’t enough, she was quick to learn from the experience.

“I think we learned a lot about how to dig off of big hitters,” she said. “They hit a lot of shots that we hadn’t seen before in the Big 12, so I think that’s going to help us in the long run. Next time we see them, we’ll be prepared for that and we’ll be able to take that with other teams.”

Baylor rebounded to play better in the third set, but Texas’ .393 hitting percentage was too much for the Bears to overcome. Staiger notched another seven kills and Aniah Philo added two, but the Longhorns took the set by an identical 25-17 secore.

The Bears showed their trademark tenacity in the fourth set, taking the lead on four different occasions. But, with the Longhorns’ Micaya White and Ebony Nwanebu finishing with 16 kills apiece, the Bears couldn’t come up with all the answers they needed.

“When it’s all said and done, they just set high balls at the pins and tried to hit over us. Sometimes they did, we didn’t dig it. And sometimes they didn’t, we dug it,” Baylor coach Ryan McGuyre said. “We didn’t slow enough down at the nets and put so much pressure on our defenders to hit a lot of heavy balls.”

Brusek, the senior libero, directed the Baylor defense throughout the match and finished the night with 14 digs. Philo and Staiger also recorded double-digit digs with 13 and 10, respectively.

“Jana’s been a phenomenal leader – incredibly steady, just a rock-solid all-star for us,” McGuyre said. “Really fearless. Really intelligent player this year. She commands the defense, and I thought she was dialed-in on some of those adjustments we were trying to make. Morgan, too.”

Despite the loss, Reed and Brusek showed excellent leadership, encouraging their teammates and making adjustments as needed. The Bears just couldn’t execute the way they expected in a game where near-perfection was needed.

In a way, it was baptism by fire. Losing key players like Tola Itiola, Shelly Fanning and Jaelyn Jackson forced the Bears to play some more inexperienced players. But now, having played arguably one of the best teams in the country, they understand what needs to be done when they meet against in November.

“Any good team can beat any team on any given day, and I think we have what it takes” Reed said. “We’re obviously playing with them for some reason, and I think when it gets tight like that, we need to be able to execute. And I think we’re learning that as the games go on.”

Staiger, the reigning Big 12 Offensive Player of the Week, finished the night with her 10th double-double of the season and 12th of her career, notching 25 kills and 10 digs.

“WVU is a good team; they’ve beaten some Pac-12 teams,” McGuyre said. “They’ve got some good wins at home. So, if we want to make a run through the (NCAA) tournament, we’ve got to make sure we take care of teams in conference. Every match will be a battle the rest of the way. We’ve got to make sure we’re firing on all cylinders.”

The first-set victory snapped a nine-set losing streak to the Longhorns, dating back to Nov. 19, 2014 where the Bears also won the opening set at home.

Baylor jumped out fast in the opening frame, taking a 4-1 lead. An ace by senior Alex Banister followed by a kill from redshirt junior Katie Staiger gave BU the 20-18 lead. Staiger’s 10 kills helped the Bears earn the 25-21 first-set victory.

The Bears recorded their first block of the match in set three, trailing 17-13. BU couldn’t overcome a .393 UT attack effort in the third frame for the 25-17 loss.

BU stayed close to the Longhorns in set four, and a kill by sophomore Aniah Philo tied up the match at 13-13 to force a UT timeout. A late BU block gave the Bears a 17-16 lead, but it wasn’t enough as Baylor dropped the final set 25-18.

HIGHLIGHTS
• Katie Staiger recorded her 10th season and 12th career double-double against Texas, finishing with 25 kills and 10 digs.
• BU earned its first set win over the Longhorns since Nov. 19, 2014 to snap a nine-set losing streak.
• The Bears out served the Longhorns, finishing with six service aces (4.0).
• Jana Brusek led all players with 14 digs in the four-set loss.

QUOTE OF THE MATCH
“They have a lot of firepower. We knew we had to play great defense to slow them down. I thought it was going to be more a matter of if our offense could keep up. In all four sets, in the first 75 percent we’d get sideouts and trade points back and forth. In the first, we took a late push and managed to pull it out in the end. In the next three, we’d go back and forth, but they managed to pull it out in the end.” –Baylor head coach Ryan McGuyre

WHAT’S NEXT
Baylor hits the road to face West Virginia on Saturday at 2:30 p.m. at WVU Coliseum in Morgantown, W. Va.