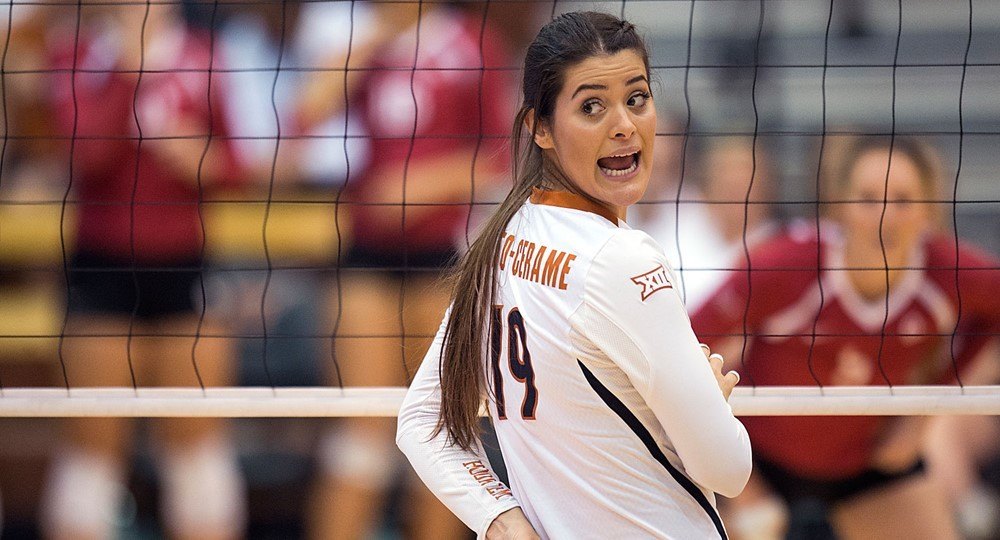 Senior Prieto-Cerame led the Texas Longhorns in their sweep of the Baylor Bears to continue their streak of 15 straight years without a loss to their in-state rivals. Current Photo via Texas Longhorns Athletics

After battling it out in the first two sets, the No. 5-ranked Texas Longhorns were able to grab a victory in just three sets against the Baylor Bears. The win was important for the Longhorns, who have not let their in-state rivals win a match against them in over 15 years (since October 27, 2001).

Texas senior Paulina Prieto-Cerame led the way offensively for the Longhorns with 17 kills, her third-highest of the year, on a .444 individual attack percentage. Freshman Micaya White nearly reached double digits, with nine kills, but also had 8 digs to contribute on defense. Senior Chloe Collins recorded 33 assists and had three kills, which ties her season-high.

On defense, junior Cat McCoy led the Longhorns with 13 digs, while another Texas freshman, Morgan Johnson, had a big night, registering a season-high tying seven blocks.

Baylor’s Katie Staiger had the most kills in the match with 19, while Aniah Philo also reached double-digits with 10 kills. Both Staiger (19 digs, 11 kills) and Philo (10 kills, 17 digs) had double-doubles, and Philo’s dig total was a match-high. Staiger also made an impact at the service line, delivering two aces.

Morgan Reed led the Bears in passing with 32 assists.

Coming up, Texas will travel to Iowa to take on the Iowa State Cyclones on Saturday, November 12th. at 4 p.m. Baylor will also have their next match this Saturday, hosting the West Virginia Mountaineers at 1 p.m.

With the win, the Longhorns lead the all-time series against the Bears, 79-2, and have not allowed a BU victory since October 27, 2001.

Senior Paulina Prieto-Cerame led the way for the Longhorns with 17 kills, her third-highest of the year, connecting on 17 of 36 swings (.444).

As a team, the Horns hit at a .245 clip while holding the Bears to a .139 hitting percentage. This marks the seventh-straight time Texas has held its opponent to below the .200 mark.

The Longhorns outblocked Baylor, 13-3, including four solo blocks, the most of the Big 12 season.

It was back and forth in the opening set of the match, but the Longhorns offense pushed ahead to lead by as many as four (15-11) after a White kill. Baylor got within striking distance, 24-23, but a cross-court kill from junior Ebony Nwanebu handed the Horns the first set, 25-23.

Texas trailed in the second until a Collins kill gave the Longhorns a narrow 7-6 advantage. The Bears fired back with a 4-0 run to lead by three, forcing a Texas timeout. The Horns evened the score again on 14 separate occasions to force extra points, and a closing 2-0 stretch ended the set for Texas, 26-24.

The Longhorns never trailed in the final set, and the Bears drained a timeout after two straight kills from Prieto-Cerame put Texas up, 12-7. The Horns never let their foot off the pedal from there, closing the set, 25-16, to secure the sweep.

Next on the slate, the Horns will travel to Ames, Iowa to play the Iowa State Cyclones on Saturday, Nov. 12. The first serve is set for 4 p.m. CT.

On how they did defensively: We held them down to .139 which is well below our average and I thought we did a really good job. Our defense continues to improve. We had some opportunities to get some swings. There are some things we can definitely work on, but it was a good win. It was a big win at home and now we have a really big test on the road and our girls will be ready for that. We’re excited for that opportunity because then we finish with the last three at home.

On how felt about the game: I just liked our composure. We gave up some runs and we gave them some errors, but we just kept moving on to the next point. Even though we didn’t have great games one and two, I liked our rhythm and I liked our mentality, what we were trying to do, our composure, and that’s a big part of it sometimes. I think in game three, they were excited and they came out with a good energy and it was a good win for us.

On what sweeping Baylor means for the team: For our team, we having been building on team chemistry and just learning to play for each other, I think this was just very crucial for us to know that we have some confidence within our team and we can go forward; especially going into Iowa State. It’s a very hostile environment there. So just gained some confidence and now we have to go back into practice and build off of it.

On what this win meant: It just felt great to go out there and beat a team like Baylor the way we did. We’ve been talking about playing for each other and just enjoying the game, having fun, and staying focused and I think that’s what we did. It’s was a good match for us and we’re moving forward.

The Bears failed to pick up the program’s first-ever win in Austin, despite strong showings in each of the first two sets against the fifth-ranked Longhorns.

In set one, the team’s traded points down the stretch, with a Katie Staiger kill cutting the lead to one at 24-23. The Longhorns squeaked out of the first frame with a 25-23 victory, picking up a kill on the second set point.

In the second, the Bears jumped out to an early lead, holding a three point lead at 10-7. With the gap narrowed, BU took a late lead at 23-22. UT again managed to avoid the BU surge, closing the set out on a 4-1 run to take the 2-0 match lead.

In the final set, Texas got off to a hot start and didn’t let up, with a late push from the Baylor squad stopped by a 5-1 UT run, clinching the set and match with a comfortable 25-16 set win.

QUOTE OF THE MATCH
“We were battling. We were in both of those first sets, going back and forth all the way through. I was really pushing them to be aggressive throughout our serves, and I think a couple of the girls might’ve gone for it a little too much. We gave up some of those errors. We worked on some things defensively that I thought were good. Texas does a great job and the outside hitters move it really well. We were just a step or two behind, just a couple of times, and that really cost us.” –Baylor head coach Ryan McGuyre

STAT OF THE DAY
.181 – the hitting percentage allowed by the Baylor defense through the first two sets, before allowing a .394 hitting mark in the third and final set.

WHAT’S NEXT
Baylor returns to the Ferrell Center on Saturday, Nov. 12, hosting the West Virginia Mountaineers at 1 p.m. in Waco.