No. 8 UNC Cruises Past ACC Rival Louisville In Straight Sets 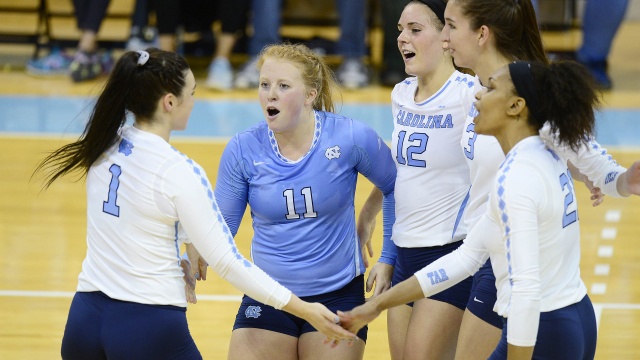 Taylor Borup was UNC’s offensive leader with 13 kills, hitting an impressive .524 clip. She also contributed 2 assists, 2 digs and 3 blocks. Just behind Borup was Taylor Leath who tallied 11 kills, 5 digs and 1 block. UNC’s Abigail Curry was the match leader in assists with 17, and Sheila Doyle dug the most balls with 13. Doyle also had 3 services aces, as did Mariah Evans.

Louisville was led by Melanie McHenry, who recorded 8 kills and 2 blocks. She was followed by Morgan Miller with 6 kills, and Tess Clark with 5 kills (while hitting a team-high .455). Lyndsay Palmer had a successful day at the service line with three aces, and tied for a team-high 14 assists, along with Kali Eaken.

Both teams will return to action on Friday, October 21st, against ACC opponents. UNC will host Boston College, and Louisville will travel to take on Virginia Tech.

Freshman Taylor Borup made her second career start against the Cardinals and dominated on offense, leading the match by hitting .524 with 13 kills and three blocks. Sophomore Taylor Leath totaled 11 kills, hitting .333, and Taylor Treacy was next with five kills.

The Tar Heels’ serving was on point, serving up a total of seven aces in the match, including five in the first set. Doyle and Evans brought their A-game, landing three apiece, while Curry served up an ace to open the second set.

A great serving run by Doyle spotted Carolina a quick 4-1 lead to open the match. The libero then led Tar Heels on another key run, featuring back-to-back aces, to push UNC in front 20-10. A pair of aces by Evans helped Carolina reach set point, and a block by Fricano and Borup closed the first frame, 25-11.

Louisville overcame an early 5-1 deficit to tie the score at eight in the second set. The remainder of the frame was highly contested, and soon the score was knotted at 20. An ace by Lyndsay Palmer put Louisville back on top, 21-20, but three straight kills by Borup helped Carolina to win the final five points of the frame and claim the second set, 25-21.

UNC won the first three points of the third set and Evans’ third ace of the match helped increase the lead to 8-3. Louisville fought back to pull within two, 9-7, and again, 13-11, but a kill by Borup helped propel the Tar Heels to a 15-11 advantage at the media timeout. The Tar Heels did not let up after the break, closing the match on a 10-4 run to complete the sweep with a 25-17 victory in the third.

UNC returns home on Friday, Oct. 21, to host Boston College in the annual Get REAL & HEEL event for breast cancer awareness. Fans are encouraged to wear pink to show their support on Friday, with first serve set for 6 p.m.

LOUISVILLE, Ky.- Taylor Borup had 13 kills and three blocks to lead the No.8- ranked North Carolina Tar Heels to a 25-11, 25-21, 25-17 win over the University of Louisville in ACC volleyball action Sunday afternoon at the KFC Yum! Center.

“We need to keep our focus and maintain our fighting mentality,” said UofL head coach Anne Kordes. “We need to stay confident and composed. We feel if we can’t get a kill early in a long rally, we feel anxious and that will come with maturity and experience. We need to iron out our serve receive and passing which have room for improvement.”

The Cards dropped the first set, 25-11. North Carolina opened up an early lead, 6-2. Louisville battled back to get within two  at 9-7 with a string of three kills. Despite two kills by Morgan Miller to keep the deficit at two at 10-8, North Carolina would finish the match on a 16-4 run. The run included a 7-0 run which included three aces.

North Carolina topped Louisville in the second set, 25-21. Despite hitting .097 in the set, Louisville hung around. They took the lead in the middle of the set at 14-13 after a Melanie McHenry kill.  But her kill was followed by a quick 3-0 Tar Heel run with that run which the Cardinals answered with their own to put Louisville ahead, 17-16. Louisville had the lead in the set on four occasions, including a late lead of 21-20. A big Tar Heel run of 5-0 gave UNC the win.

. Another early run by the Tar Heels put the Cards in catch-up mode the rest of the way. Down 5-1 the Cards battled back with a kill by Morgan Miller and an ace by Lyndsay Palmer. Those scores were quickly answered with another 3-0 North Carolina run. Later in the set, Melanie McHenry recorded her fifth of seven kills to bring the Cards within two at 16-14. A 7-1 run consisting of three UNC kills and three Cardinal attack errors put the Tar Heels in the driver’s seat with a convincing 23-15 lead. Two kills by the Cards to get their total to 17 was not enough as the Cards fell in the third and final set, 25-17.

The Cards are back in action on Friday in Blacksburg, Virginia when they battle the Hokies of Virginia Tech at 7:00 p.m. before travelling to Pittsburgh to face the Panthers at 3 p.m.