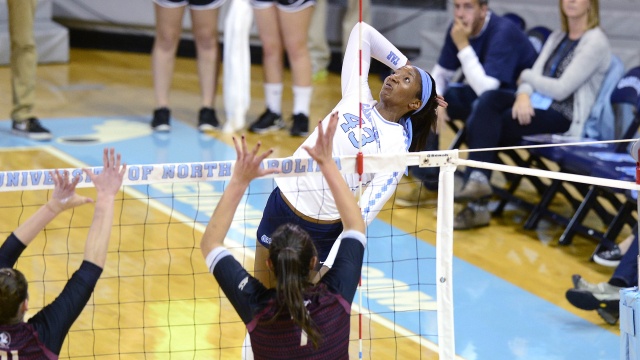 North Carolina and Florida State came into Friday’s game as the top two programs in the ACC at 4-0 each, plus only 2 losses overall.

One-or-the-other had to give way, and Florida State gave way to the Tar Heels in a big way early before an eventual 3-0 sweep by the home team.

“This was a big win,” said head coach Joe Sagula. “We have to be able to be good at home and it was such a relief to be playing in a friendly environment with a great crowd supporting us. I’m really proud of our team, mostly because I think we got better in this match. The way we’ve been playing, I told the team it seems like a new start for us. We’ve been on the road for such a long time that it’s like a new season is starting. I like the way we started.”

The first set looked like the match would be a rout, with UNC hitting .407 to Florida State’s -.036, including the Tar Heels scoring 10-12 points on North Carolina serves (83%).

The Seminoles would dig back a little in the 2nd and 3rd sets, but NOrth Carolina still was able to ground out wins in both to end the night with the minimum number of sets played.

Taylor Leath led all players with 13 kills and was the only player for either team in double digit kills. Taylor Fricano had 9 kills for the Seminoles, but hit at a higher percentage (.412-.250) than did Leath.

Florida State had two players – Milica Kubura and Mara Green – with 8 kills each.

Sydnye Fields, who started off the season very hot for UNC, has cooled off as of late. She only had 2 kills on Friday, and only 3 blocks to go with it – both of which are  below her season average.

CHAPEL HILL – No. 9 North Carolina experienced a happy homecoming on Friday night, cruising to a 3-0 sweep of No. 16 Florida State in its ACC home opener. The Tar Heels crushed the Seminoles, 25-12, in the opening set before battling to 25-22 and 25-21 wins over the next two frames. The win marks UNC’s third over a ranked opponent this season as the Tar Heels improve to 13-2 (5-0 ACC), while Florida State takes its first conference loss of the year, falling to 11-3 (4-1 ACC).

“This was a big win,” said head coach Joe Sagula. “We have to be able to be good at home and it was such a relief to be playing in a friendly environment with a great crowd supporting us. I’m really proud of our team, mostly because I think we got better in this match. The way we’ve been playing, I told the team it seems like a new start for us. We’ve been on the road for such a long time that it’s like a new season is starting. I like the way we started.”

The Tar Heels, who already have two wins over top-10 opponents this season, improved to 3-1 on the year against top-25 teams, picking up their first sweep of a ranked opponent this year t against the 16th-ranked Seminoles. The 3-0 victory marked the first time the Tar Heels have swept Florida State in 10 years (Nov. 16, 2006), as UNC had gone just 5-12 against the ACC powerhouse over the past decade.

Sophomore Taylor Leath led Carolina with her fifth double-double of the season, posting a match-high 13 kills to go with 12 digs. Taylor Fricano and Julia Scoles followed with nine kills apiece while combining for just three errors, as Fricano hit .412 and Scoles attacked at a .320 clip. Taylor Treacy totaled eight kills in the match, including going a perfect 4-for-4 in the first set.

The Tar Heels won the serve and pass battle, leading 4-1 in aces while allowing Florida State to side out at measly 45 percent. Carolina sided out a 62 percent on the night, including a nearly-perfect 10-for-12 in the first set.

Florida State entered the match leading the conference with a .272 clip on the season, including .336 in ACC play, but despite completing just six blocks in the match, Carolina held the Seminoles to just .145 hitting, including a -.036 clip in the first set.

Florida State raced out to a 6-2 lead to begin the second, but Carolina regrouped after a timeout to push back in front, 8-7. The score remained tight until a 3-0 run with the help of a kill and an ace by Scoles made it 16-13 UNC. The Tar Heels forced further in front, 23-17, but the Seminoles did not back down, pulling back within two, 23-21. A kill on the slide by Fricano stopped the run, and a Seminole service error ended any hope of an FSU comeback as UNC took the second set, 25-22, to grab a 2-0 match lead.

“We knew Florida State would make a push, and they did,” said Sagula. “The fact that we came from behind was a really good positive for us. I felt we handled ourselves well. We never really panicked even when we got behind. I thought we stayed steady enough to overcome the errors, and we got them refocused.”

Florida State once again had the upper hand early in the third set, pulling ahead 13-8 on a kill by Mara Green. However, a kill by Fricano put the ball in Scoles’ hands, and the talented rookie served the Tar Heels on a defining 9-0 run to turn the tables and race ahead, 17-13. Another kill by Green finally allowed the Seminoles to rotate, and soon FSU tied the score at 17. Nevertheless, kills by Treacy and Curry pushed UNC right back in front, and a kill by Scoles was the final blow as Carolina closed out the third, 25-21, to finish the match in three.

“I’m really proud of our team,” said Sagula. “To play a team like Florida State, who we have a lot of respect for—they’re a really good team, a ranked team, who is always a tough opponent. The fact that we came out really strong was important. We wanted to be the team that set the tone.”

The Tar Heels have a day and a half to rest before returning to Carmichael Arena on Sunday, Oct. 9, to host Miami in ACC play. The match, which is slated to begin at 1 p.m., will be televised live on the ACC’s group of regional sports networks (find your local affiliate) as well as streamed on ACC Network Extra.

Melanie Keil also enjoyed a solid outing for the Seminoles as she came through with five kills, a .400 attack percentage and three assisted blocks. The FSU back row was led by the combination of Katie Horton and Cecilie Woie who shared a team-high 11 digs.

A strong showing in the early going of the third set, highlighted by three kills from Green and Christina Ambrose, provided Florida State with a 13-8 lead. North Carolina took advantage of an unforced Seminole error and with Julia Scoles in serve scored the next nine unanswered points as it moved in front by four.

Green and Ambrose got the Seminole offense back on track, allowing Woie to tally three points in serve, as the game reached a 17-17 deadlock on a kill from Keil. Two Scoles kills along with three unforced errors by the Florida State offense allowed North Carolina to complete just its seventh sweep in the 62 all-time meetings.

“I am really disappointed in the loss tonight,” said head coach Chris Poole. “We need to regroup and find a way to move forward against NC State on Sunday. North Carolina played a great match and had a great crowd that really kept them energized. We couldn’t sustain a higher level of play and have to be more consistent if we want to win over a strong Wolfpack team on the road.”

The Seminoles rebounded from a difficult opening set by using two kills each from Green and Kubura to establish the early 6-2 advantage. North Carolina answered the challenge by scoring eight of the next 12 points as they, overcoming two Horton kills along the way, to make for a 10-all tie.

Six points later, with the two units knotted at 13-13, the Tar Heels used a kill by Scoles and the combination of a kill and service ace by Taylor Leath to move in front by three. North Carolina stretched the lead to five, on a kill by Sheila Doyle, but a strike by Natasha Calkins along with two points by Brianne Burkert in serve kept the Seminoles within range, 23-21. The Heels allowed just one final point as they took a 2-0 lead into the intermission.

Florida State capitalized on four kills and four unforced Tar Heel errors to make for a 12-8 contest in the early stages of the first set. Highlighted by a 7-3 run, North Carolina stretched its lead to eight, forcing the second Seminole timeout after two kills from Taylor Treacy and a slam by Hayley McCorkle.

Keil slammed home a kill for Florida State immediately coming out of the breather, but it was the combination of two Leath strikes along with four unforced Seminole errors to post the 13-point win.

The Seminoles return to action at 1 p.m. on Sunday, Oct. 9, when they head to Raleigh, N.C., for a clash with NC State (9-7, 2-2 ACC). Florida State owns a 45-5 all-time record against the Wolfpack and has won its last 30 matches in the series dating back to a four-set victory on Sept. 29, 2000. Florida State fans will hear commentary about the match from Andrew Sanders.