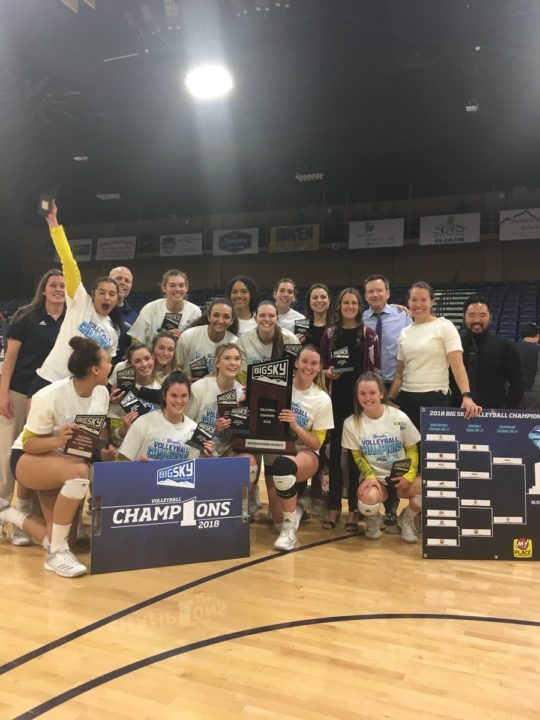 Behind a double-double performance from Kaylie Jorgenson, top seed Northern Arizona swept its way to its third Big Sky Volleyball Championship Saturday evening as the Lumberjacks clinched the league’s automatic berth into the NCAA Tournament with a 3-0 victory over No. 2 seed Idaho. Current Photo via Big Sky Conference

GREELEY, Colo.  – Behind a double-double performance from Kaylie Jorgenson, top seed Northern Arizona swept its way to its third Big Sky Volleyball Championship Saturday evening as the Lumberjacks clinched the league’s automatic berth into the NCAA Tournament with a 3-0 victory over No. 2 seed Idaho at Bank of Colorado Arena.

The Big Sky Co-MVP led all players with 15 kills and 16 digs, recording the match’s final point with a kill. Jorgenson hit .344 for the match while posting her 22nd double-double of the season.

Northern Arizona (26-8) claimed its first Big Sky Championship since 2015 to earn an automatic bid into the NCAA Tournament. The Lumberjacks also captured the conference championship in 1999.

The Lumberjacks powered their way to a 1-0 lead with the help of a 6-0 run midway through the first set to take an 18-12 lead and force an Idaho timeout. NAU stretched its advantage to as many as eight points before taking the 25-18 win.

A 5-0 run late in the second propelled NAU past Idaho (23-10) as the Lumberjacks claimed a 19-14 advantage. The Lumberjacks received offensive contributions from five different players down the stretch to tally a 25-19 victory.

Northern Arizona kept its momentum going in the third and final frame, jumping out to a 13-4 and recording a 25-17 win for the sweep.

The Lumberjacks were efficient in their offensive attack, hitting .287 for the match. Ryann Davis followed Jorgenson with 11 kills while Heaven Harris added eight and Abby Akin finished with six.

Idaho was limited to a .153 hitting percentage with Sarah Sharp leading the way with 12 kills. The Vandals also committed eight service errors compared to just three for the Lumberjacks.

Northern Arizona will await to learn its first round opponent when the NCAA Selection Show airs Sunday at 6:30 p.m. MT on ESPNU. The show will also be streamed online on ESPN3.

🏆 TROPHY ALERT 🏆
For the third time in program history, @NAUVolleyball is headed to the @NCAAVolleyball tournament after sweeping the @BigSkyConf tournament! Not to mention, @NAU went in as the No. 1 seed, winning the regular season title! #NAUStrong⚒️🌲💪 pic.twitter.com/CJrm0bodod