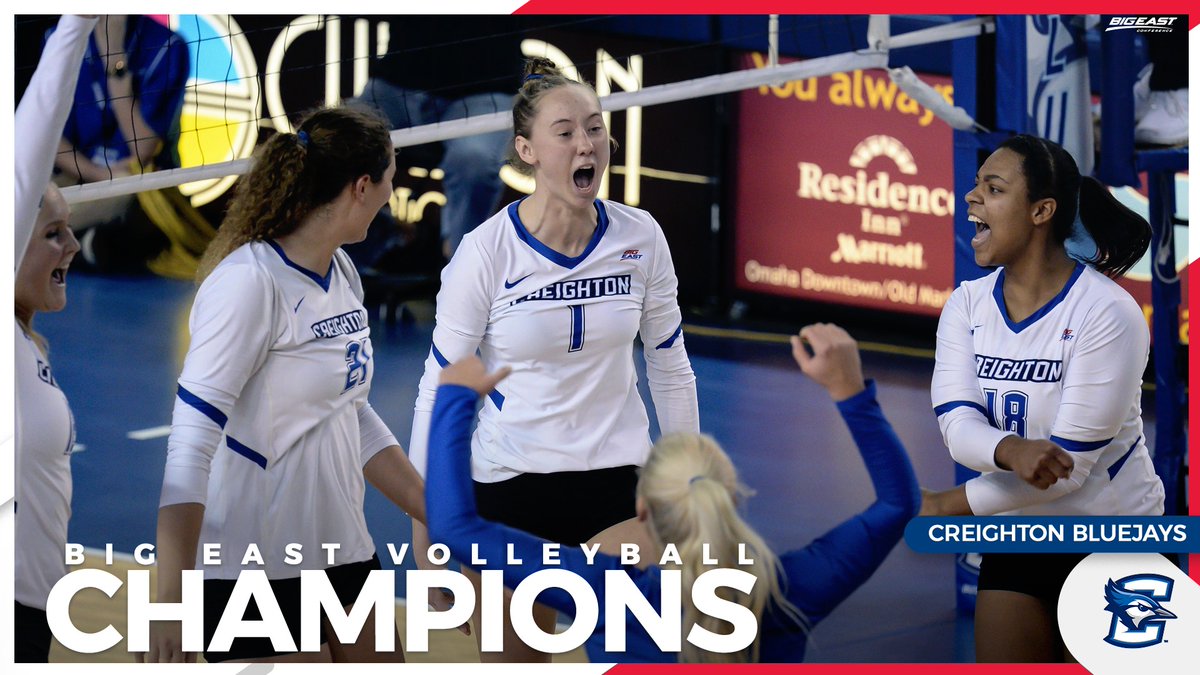 For a fifth-straight year, the No. 1 seed Creighton Bluejays have won the BIG EAST Volleyball Championship, posting an exciting four-set victory over No. 2 seed Marquette. Current Photo via Creighton Athletics

OMAHA, Neb. – For a fifth-straight year, the No. 1 seed Creighton Bluejays have won the BIG EAST Volleyball Championship Presented by Jeep after an exciting four-set victory over No. 2 seed Marquette (26-28, 25-22, 25-21, 25-21). This is only the second time in BIG EAST history that a team has won at least five consecutive tournament titles. Pittsburgh won seven in a row from 1988-94. The regular-season champion Bluejays have now won 20 straight matches as they head into the 2018 NCAA Volleyball Tournament as the BIG EAST’s automatic qualifier.

Creighton’s Jaali Winters was named Most Outstanding Player of the championship for the second time in her career. She was named Most Outstanding Player of the 2016 tournament. No player has won the tournament’s top honor twice since Notre Dame’s Jaimie Lee won it in 1996 and 1997. Also the BIG EAST Player of the Year, Winters collected a double-double with 19 kills and added 17 digs, while hitting .265 for the match. Along with Winters on the all-tournament team, the Bluejays’ Taryn Kloth and Naomi Hickman were also selected. Kloth picked up 19 kills, while hitting .234. Defensively, Hickman gathered a match-high nine blocks for Creighton.

Runner-up Marquette, which entered the week ranked 15th in the RPI, will wait to see where they end up in the NCAA tournament. The Selection Show will air Sunday night at 8:30 p.m. ET on ESPNU. The Golden Eagles’ Allie Barber and Hope Werch were named to the all-tournament team. Barber had a match-best 20 kills and hit .262. Werch notched 14 kills for Marquette along with eight digs. St. John’s Efrosini Alexakou and Villanova’s Amanda Pedersen-Henry round out the seven-member all-tournament team.

Both teams came out strong with neither team leading by more than two points the entire set. The score went back and forth with 22 ties and 13 lead changes before Marquette came out on top off a kill by Ellie Koontz 28-26. Marquette’s Werch set the tone offensively in set one with seven kills, while teammate Sarah Rose notched seven digs, both leading all players. Creighton had not dropped a set in any match since its last meeting with Marquette on Oct. 26.

The Bluejays got off to a quick start in the second set going up by as many as 11 points. Creighton was up 20-11, before the Golden Eagles rallied back with six straight points to close the gap at 20-17. Marquette put up a fight, but the Bluejays finally won the second set 25-22 to tie the match at one set apiece. Winters led all players in the second set with eight kills for Creighton, while teammate Madelyn Cole collected a set-best six digs.

In the third set, Marquette went up by five points at 9-4, but Creighton stormed back with five points of their own to tie the score. The Bluejays took the lead by four points at 15-11 before the Golden Eagles came back to go up 19-18. Creighton ended up taking seven out of the next nine points to win the set 25-21. Kloth tallied a set-high eight kills for the Bluejays, while Marquette’s Martha Konovodoff garnered five digs to lead all players.

The fourth set was as close as 10-8 in favor of Creighton, before the Bluejays pulled away late in the set to go up by seven points 18-11. Marquette kept it close, pulling within three points to make it 24-21 at match point for Creighton. A kill by Kloth gave the Bluejays the win 25-21.