Northern Arizona, Idaho Square Off with Big Sky Supremacy On the Line 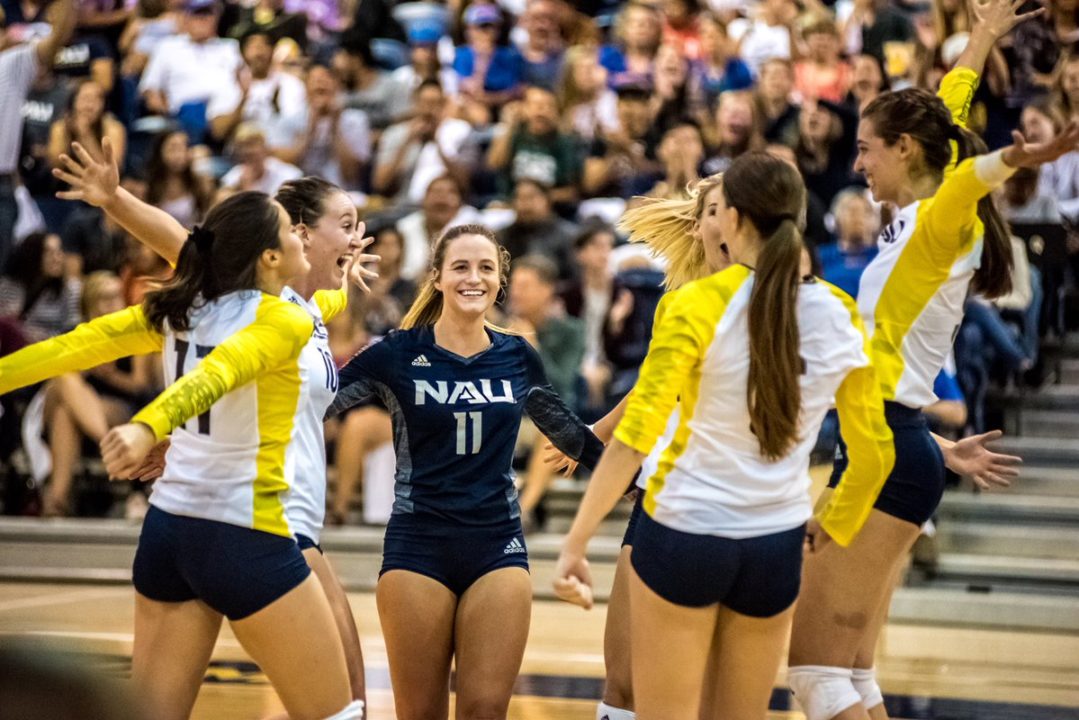 NAU and Idaho, the top two teams in the Big Sky, square off in the Rolle Activity Center on Thursday before the Lumberjacks fly out to face Eastern Washington Saturday in Cheney, Wash. on Saturday. Current Photo via Northern Arizona Athletics

FLAGSTAFF, Ariz. (November 13, 2018) – It does not get bigger than the Northern Arizona volleyball team’s final home match of the season on Thursday as the Lumberjacks host Idaho on the front end of a split home-and-road week to close the regular season.

NAU and Idaho, the top two teams in the Big Sky, square off in the Rolle Activity Center at 7 p.m. on Senior Night before the Lumberjacks fly out to face Eastern Washington Saturday in Cheney, Wash. on Saturday at 8:30 p.m. MST.

Thursday will mark the final career home matches for NAU’s three seniors: Kaylie Jorgenson, Brittni Dorsey and Jordan Anderson. Each of the three seniors are already among the program’s all-time bests at their respective positions. Entering their final home matches, Jorgenson ranks ninth in school history with 3.11 kills per set. Dorsey is fourth in block assists (323) and sixth in total blocks (368). Meanwhile, Anderson is third in digs (1,351) and sixth in digs per set (3.29).

NAU takes an eight-match win streak, its second-longest conference win streak in program history, into Thursday’s showdown with Idaho. The Lumberjacks’ only other longer Big Sky win streak was their historic 17-match streak spanning 2015-16. As a result of its current run, the Lumberjacks are 21-8 overall and 13-3 in league play. Idaho leads NAU by a game with a 20-8 overall record and 14-2 conference mark. Idaho and NAU were voted first and second respectively in the Big Sky Preseason Coaches Poll.

“Our team understands the magnitude of (Thursday’s) match, but they’re also very aware of playing their best match,” said head coach Ken Murphy. “The biggest thing we’ve gained over the last few weeks is understanding how well they compete together and the little things in the match they do to be successful. Our team is focused on playing a great match both on Thursday and Saturday this week, and trusting the fact that that will be good enough to get the result that we want.”

With two wins this week, the ‘Jacks would clinch the overall No. 1 seed in next week’s conference tournament and at minimum a share of the Big Sky regular season title pending Idaho’s Saturday result versus Southern Utah. The Lumberjacks have won the regular season conference title twice prior in 2000 and 2015.

Last week, NAU swept Southern Utah on Tuesday and then held off Northern Colorado in five sets on Saturday. The Lumberjacks jumped out to an 11-2 fifth set lead versus the Bears on their way to their eighth straight win. Sophomore Heaven Harris led the ‘Jacks last week with 29 kills, including a career and season-high tying 19 in the Northern Colorado win. Jorgenson matched Harris’ 19 kills in the victory on Saturday, while junior Abby Stomp handed out 53 assists – the most by a Lumberjack this season.

Junior Sydney Lema enters the week a single dig shy of a 1,000 for her career, which would make her the 15th player in program history to accomplish the feat. Lema tallied her second double-double of the season last Saturday, tallying 10 kills and 14 digs versus Northern Colorado.