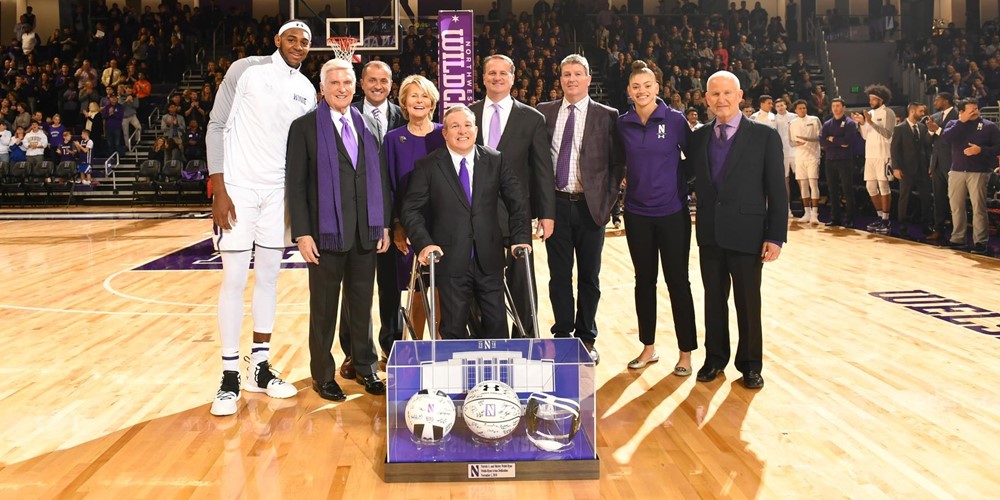 Northwestern University dedicated the striking new Welsh-Ryan Arena on Friday, Nov. 2, following its complete renovation, opening the doors of a world-class facility built to be the most accessible in college athletics. Current Photo via Northwestern Athletics

EVANSTON, Ill. – Northwestern University dedicated the striking new Welsh-Ryan Arena on Friday, Nov. 2, following its complete renovation, opening the doors of a world-class facility built to be the most accessible in college athletics.

The transformation of one of Northwestern’s most used and versatile venues was made possible by the generosity of loyal Northwestern benefactors and alumni, most notably Trustee Patrick G. Ryan ’59, ’09 H (’97, ’00 P) and Shirley Welsh Ryan ’61 (’97, ’00 P).

“All of us at Northwestern are truly grateful to Pat and Shirley for their incredible support,” said Northwestern President Morton Schapiro. “The Ryan family’s ongoing dedication has transformed this University and its campuses. The new Welsh-Ryan Arena is a beautiful and now exceptionally accessible facility, and that’s something the entire University community can celebrate.”

The facility underwent a 19-month transformation that began immediately after the Wildcats 2017 men’s basketball regular-season finale, even before the University hosted its historic Selection Sunday watch party in the venue that March. The finished product that debuted Friday is a world-class competitive home for Northwestern men’s and women’s basketball, volleyball and wrestling, as well as a host of events for the University and surrounding communities.

This is our home.

“This is a historic day for Northwestern University and the Department of Athletics and Recreation,” said Combe Family Vice President for Athletics and Recreation Jim Phillips. “The new Welsh-Ryan Arena is a world-class venue that will host competitions, practices, graduations, concerts and community events. We are so thankful to Pat and Shirley Ryan for the impact their generosity will make today, and for generations to come.”

The new Welsh-Ryan Arena will transform the experience of Wildcats student-athletes and fans alike.

We recently got the chance to see our new home for the first time.

Come see it for yourself Friday night against No. 7 Penn State 😼#B1GCats pic.twitter.com/lGR0H0gXQf

Lounges for wrestling and cheerleading feature soft seating furniture and the latest in audio and visual technology. Athletic training facilities, accessible from the same secure hallway as the locker rooms, include hot and cold hydrotherapy and a private exam room.

The main arena floor is constructed of maple wood sourced from Menominee Tribal Enterprises and built by Connors Sports Floors, the provider of all NCAA Basketball Tournament and FIBA competition courts. An industry-leading Taraflex court system will be installed for Northwestern volleyball contests.

Fans are welcomed into a lobby more than double the size of its predecessor, one that includes a digital presentation of the Northwestern Athletic Hall of Fame.

The arena is believed to be the most accessible anywhere in college athletics, with ADA seating on every level and from every vantage point. Five elevators have replaced the single one in the old Welsh-Ryan Arena, along with five new accessible family restrooms.

Shirley Ryan commented on the accessible features of the new Welsh-Ryan Arena. “We are especially pleased that the architectural design is very responsive to people with special and differing needs,” she said. “There are five strategically positioned elevators, and guard rails have been placed down the center of all aisles with wider and deeper steps at a slightly lower rise. Also, all of the washrooms are at the very high end of ADA compliance. We were very pleased to see family bathrooms so that families can take their young children into a private washroom. Finally, wheel chair-accessible seating is distributed generously throughout the arena, rather than at just one location. Congrats to the athletics department and University administration for the sensitive and appropriate treatment of Northwestern supporters.”

The number of bathroom fixtures has increased by more than 270 percent, while concessions points-of-sale have increased from eight to 36. Enhanced wireless connectivity is installed throughout the building.

A four-sided, center-hung scoreboard highlights the cutting-edge video, audio and lighting capabilities that transform the game presentation experience throughout the arena, including a 360-degree ribbon board and high-definition sound. Natural light fills the concourses on all three levels thanks to new windows that all feature automatic translucent and blackout shades.

Throughout the venue, hints of its past exist for fans. The original roof structure remains intact and refurbished. Each of the four corner stairwells in the building includes the original exterior wall of the old Welsh-Ryan Arena, as the footprint was expanded ten feet on both the east and west sides.

“This spectacular building provides state-of-the-art facilities for our student-athletes, the entire Northwestern family and the larger community,” said Steve Wilson. “Sue and I are proud to support this initiative, following the great leadership of the Ryans, and we look forward to being part of what will be a terrific home court venue.”

Construction on McGaw Memorial Hall, in which Welsh-Ryan Arena is located, was started in 1951 and completed in 1953. In the early 1980s, the basketball arena was renovated and named in honor of the Ryans’ parents, Mr. and Mrs. Robert J. Welsh Sr. and Mr. and Mrs. Patrick G. Ryan Sr., in recognition of the Ryan family’s extraordinary leadership and support for Northwestern. Additional improvements have been made to the building since that time, but this project is the first top-to-bottom renovation of the entire structure since its original construction.

Patrick G. Ryan, founder, chairman and CEO of Ryan Specialty Group, is a widely respected entrepreneur and insurance leader. He founded and served for 41 years as CEO of Aon Corporation and is a member of the International Insurance Hall of Fame. In 1987, Mr. Ryan received the esteemed Horatio Alger Award, which honors those who are dedicated to the principles of integrity, hard work, perseverance and compassion for others. In 2008, he was elected to the American Academy of Arts and Sciences, the nation’s oldest and most prestigious honor society, reflecting his many contributions to higher education. Mr. Ryan was chairman of the Northwestern Board of Trustees for 14 years, and in 2009, Northwestern awarded Mr. Ryan an honorary doctorate in humane letters.

Shirley Welsh Ryan is a national impact leader for children’s early detection and intervention of movement, sensory and communication development and has been appointed by two U.S. presidents to the National Council on Disability. In 1985, Mrs. Ryan co-founded with Mr. Ryan Pathways.org, which has merged into the Shirley Ryan AbilityLab, ranked the No. 1 U.S. rehabilitation hospital for 27 straight years. A civic and cultural leader, Mrs. Ryan serves as a trustee of University of Notre Dame, which awarded her an honorary doctorate degree in jurisprudence. Mrs. Ryan founded in 1976 Northwestern’s graduate-level Learning for Life lecture series, which continues today.

The Ryans’ exceptional philanthropy has provided support for excellence in athletics, visionary research in nanotechnology, world-class facilities, undergraduate scholarships, graduate fellowships and the creation of endowed professorships across the University — demonstrating their profound bond with their alma mater.

The Ryans treasure their three sons, Pat ’97 JD, MBA, Rob ’00 JD, MBA and Corbett, daughter-in-law, Lydia, and three grandchildren along with their extended family members, many of whom have Northwestern degrees.

Stephen R. Wilson earned his undergraduate degree in sociology at the Weinberg College of Arts and Sciences and received his MBA from the Kellogg School of Management. Applying the perspectives and skills acquired at Northwestern, Mr. Wilson built CF Industries Holdings, Inc., into a global leader in fertilizer manufacturing and distribution, retiring in 2014 as its chairman and chief executive officer. He serves on the Northwestern Board of Trustees and on the Steering Committee for We Will. The Campaign for Northwestern.

Susan K. Wilson earned her degree in journalism from the Medill School of Journalism before going on to a career in public relations. She serves on the Board of Advisors for the Mary and Leigh Block Museum of Art and is a member of the Women’s Board of Northwestern.

In 2017, the Wilsons were inducted into the Northwestern Athletic Hall of Fame.

The Wilsons raised their children, Jeffrey ’08 MBA and Elizabeth, in Evanston and have many great family memories of cheering on Wildcat teams.

Support for athletics and recreation is part of the University-wide fundraising campaign, We Will. The Campaign for Northwestern. Funds raised are helping realize the transformational vision set forth in Northwestern’s strategic plan and solidify the University’s position among the world’s leading research universities. More information on the Campaign is available at wewill.northwestern.edu.