This Week in the Missouri Valley 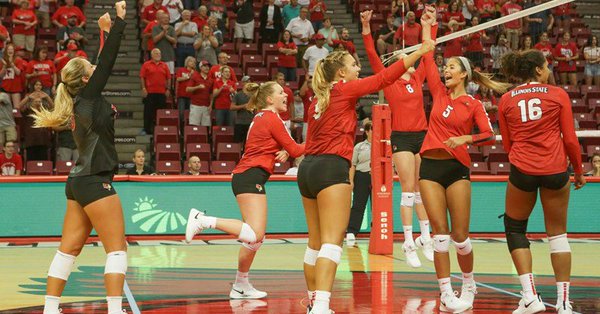 With just two conference weekends remaining, three of the six teams set to participate in the 2018 Missouri Valley Conference Volleyball Championship have already been locked up, while the final three spots and seeding is still up for grabs during the final two weeks of the regular season.

Drake is also alive for a tournament spot, but currently sits seventh in the standings with a 5-9 league record.

Showdown at the Top
Illinois State topped nationally-ranked UNI on Saturday night to finish the 2018 home slate with a perfect 9-0 record. Last season, the Panthers visited Redbird Arena with the same national rank – No. 25 – and the Redbirds handed UNI a five-set loss, similarly to this weekend. The Redbirds have now posted a winning record at Redbird Arena in eight of the last nine seasons. Both teams sit atop the standings with only one league loss.

Small Company
Only five times in Valley history has a team finished last in the standings the previous year make the MVC Tournament the following season.  Bradley became the first team since Southern Illinois in 2012 to accomplish the feat.

20 Win Club
Bradley joined Illinois State and Valparaiso in the 20 win club over the weekend. The Braves last 20-win campaign was 2001 (24-8) and prior to this fall BU had just two 20-win seasons since the MVC went to a double round-robin conference schedule in 1992.

Big Turnaround
Bradley and Loyola are two of just four teams in the country to have a 10-win improvement from last year through matches of Nov. 5.  Joining the Braves and Ramblers in the exclusive group is Stetson (+13) and UNLV (+10).

Bears Heating Up
Missouri State’s four-match winning streak equals its longest of the season, and the Bears have posted impressive numbers over that stretch. MSU has averaged 15.33 kills, 14.67 assists and 18.73 digs per set over its last four wins, figures that would rank 2nd, 2nd, & 4th nationally if done for a full season.

NCAA RPI Report
The latest edition of the NCAA RPI report has been released and The Valley has three teams featured in the top-70. UNI leads the league at No. 15, while Illinois State (No. 34), and Valparaiso (No. 68) are also among the nation’s top-70.  Four other teams rank in the Top 130 (Missouri State, Bradley, Drake and Loyola). As a conference, The Valley ranks eighth among 32 conferences.

The Valley Digs Deep
Currently, the MVC has six teams ranking Top 30 nationally in digs per set, including Bradley leading the MVC with 19.37 per set.

The Valley has led the nation in digs per set three times in the last four seasons (Illinois State in 2014, UNI in 2016 and Valparaiso in 2017).