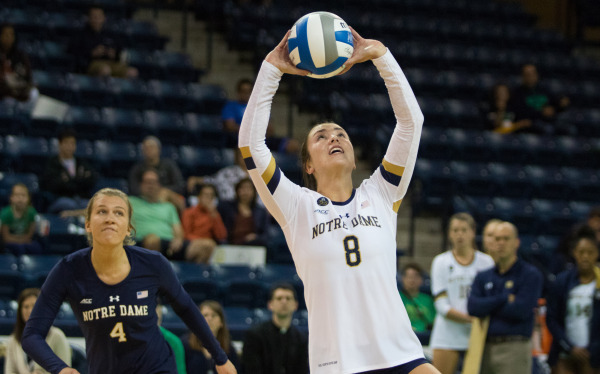 Notre Dame avenges their only loss of the year against #22 Ohio State.  Current Photo via Notre Dame Athletics

Two days after getting swept by #22 Ohio State on the road, Notre Dame protected their home court and avenged their only loss of the season, pulling out a hard fought four set victory over the visiting Buckeyes. Set scores were 25-22, 21-25, 25-14 and 25-17 . Jemma Yeadon and Sydney Kuhn led the way for Notre Dame with 19 and 16 kills respectively. Caroline Holt dished out 42 assists and Ryann Dejarld collected 28 digs. The Fighting Irish improve to 7-1 on the year and will return to action on September 15th when they host Michigan State.

NOTRE DAME TAKES DOWN #24 OHIO STATE! The Irish record their 1st win over a ranked team since 2012! #GoIrish pic.twitter.com/WGXPFMDF9e

Set one was a hard fought throughout with neither team finding any significant separation early on. A kill by Yeadon grew the lead to 22-20 for Notre Dame, causing Ohio State to call a timeout. Notre Dame continued the momentum to finish the set, ending it on another kill from Yeadon. Notre Dame closed out the set on a 5-1 run. Kuhn had 6 errorless kills in the set while Yeadon collected 5. Luisa Schirmer tallied 6 kills in the set for Ohio State.

Set two saw Ohio jump out to an early three point lead with some strong defensive play in the back row. Notre Dame fought back and tied the score and the set remained close until Ohio State went on a 4-0, highlighted by an Ashley Wenz kill. Notre Dame rallied again and cut the lead to two on a double block from Wenz and Sam Fry, forcing a timeout from the Buckeyes. The rally wasn’t over as another Notre Dame double block closed the lead to two. Madison Smeathers finally stopped the run on a kill from the middle. Notre Dame got no closer than two for the rest of the set as Ohio State closed it out on a kill from Ayanna Swan.

Notre Dame jumped out to an quick 9-3 lead in set three behind strong serving from Kuhn, forcing the Buckeyes to call an early timeout. The lead swelled to 12-4 on a block from Fry and Holt and Notre Dame never looked back, rolling to an easy set victory with Yeadon closing it out with a kill off the block.

Ohio State stormed out of the gate in set four, taking a 3-0 lead on an ace from Schirmer, forcing a timeout from Notre Dame. Notre Dame rallied though, knotting up the score at 5 before finally taking their first lead of the set on a mishandled ball. Yeadon capped off a long rally by tooling the block to give the Irish a 14-10. The lead swelled to 19-12 for the Irish before the Buckeyes made a late run, pulling to within four and cause Notre Dame head coach Jim McLaughlin to call a timeout. The timeout stabilized the Irish as the closed out the match behind tough serving from substitute Natalie Johnson.

Wenz led the way for Ohio State with 16 kills. Smeathers and Schirmer chipped in 12 kills apiece. Hannah Gruensfelder had a record setting day on defense with 38 digs. The 38 digs are a school record for a four set match. The Buckeyes fall to 5-3 on the year and will return to action on September 15th when they host Western Kentucky at the Buckeye Invitational.

Sophomore Jemma Yeadon paced the Irish attack with 19 kills and added 19 digs to complete her double-double. Senior Sydney Kuhn also finished with a double-double, recording 16 kills and 13 digs. Junior Ryann DeJarld led Notre Dame in digs with 28 on the afternoon. The Irish block was in top form, finishing with 12.5 for the match as a team.

The Irish came out of the gates locked in on Sunday afternoon, taking the first set against the Buckeyes 25-22. The first frame was close for throughout, as neither side held more than a three-point advantage. Ohio State held a 13-10 lead but the Irish fought back to take six of the next nine points to tie it up at 16-16. The score moved to 21-21 and Notre Dame claimed the next three points off freshman Madison Cruzado’s serve to help the Irish seal the opener.

Ohio State bounced back from the first set loss by winning the second stanza 25-21. The Buckeyes never trailed in the frame. With the set tied 15-15, Ohio State took the next four points to open up a four-point lead. Notre Dame fought back and drew within one at 21-20 but was unable to complete the comeback, as the Buckeyes leveled the match at 1-1.

Notre Dame came out of the 10-minute intermission refocused and ready to go from the start of the third set, as the Irish dominated the Buckeyes by a score of 25-14 to grab a 2-1 lead in the match. Notre Dame used impressive play at the net to build an early 13-4 advantage, posting five blocks in that span. The Irish led by as many as 12 points (21-9) en route to the third set victory.

The Irish were clinical in closing out the fourth frame, completing the victory by winning the fourth set 25-17. Notre Dame held a 12-10 lead midway through the set and then went on a run by claiming seven of the next eight points to take a commanding 19-11 lead. From there Notre Dame cruised to the win to notch its seventh win of the season.

Yeadon was everywhere for the Irish, totaling 19 kills, 19 digs and three blocks to lead the team to victory. The sophomore now has six double-doubles in the seven matches she has played and has surpassed the 10-dig mark in every match in 2017.

The Irish played nearly flawless attacking volleyball against the Buckeyes, recording a season-low eight attacking errors over the four sets of action. For comparison, the opposition totaled 32 attacking errors in the match. Notre Dame’s average of just two errors per set on the afternoon is the best mark this season in a match for the Irish.

On the team’s bounce back win over Ohio State

“Our presence was better and we trusted in our game a little bit more. I think our players have to make a journal entry on how they prepared for this game versus Friday’s and then learn from it. I think the biggest thing is you get what you earn and we have been working hard. Things happen because you make it happen and we made a step in the right direction today.”

On the Notre Dame block in the final two sets

On only making eight attacking errors in the match

“We have been holding the team to a standard and there are standards to be met, especially with errors and blocks. We think we can meet those standards and be a little bit above them. I think we did that today.”

Notre Dame is back in Purcell Pavilion on Friday, Sept. 15, as the Irish host the Shamrock Invitational. Notre Dame opens the tournament at 7 p.m. ET against Michigan State. The Irish then face Southern Illinois at 12:30 p.m. and Central Michigan at 7 p.m. on Saturday, Sept. 16.

NOTRE DAME, Ind. — The Fighting Irish obtained revenge of sorts in the second of two meetings with Ohio State this weekend, rebounding from victimization of a Friday sweep in Columbus by besting the Buckeyes in four sets (25-22, 21-25, 25-14, 25-17) on Sunday. The story of the day for Ohio State was freshman libero Hannah Gruensfelder and her astonishing 38 digs, the most ever by a Buckeye in a four-set contest.

Gruensfelder’s digging explosion surpassed the previous four-set mark of 35 digs by Valeria Leon versus Arizona in 2015 and is the second-highest total overall (Julie Chellevold dug 41 balls in a five-set match back in 1990). Her season average expands to 5.03 digs per set, good for the top spot in the entire Big Ten Conference. Ohio State’s 109 team digs total versus Notre Dame cracks the Top-20 in school history, fueled by Audra Appold (17), Luisa Schirmer (16) and Taylor Hughes(14) each contributing heavily as well.

Set 1: Gruensfelder had it going from the jump, digging a dozen balls in the opening frame. Offensively, Ohio State was pushed by Hughes’ 11 assists and four kills, along with a combined 10 kills from Schirmer and Ashley Wenz on the outside. The 11th tie of the afternoon came at 21-21 and represented the start of a 5-1 Irish run to conclude the set, 25-22.

Set 2: Another dozen digs by Gruensfelder was supplemented by nine and seven kills, respectively, by Wenz and Madison Smeathers as Hughes divvied out 19 assists and the Buckeyes attacked nearly .300 as a team. Ohio State pulled even at one set apiece with a 25-21 triumph.

Set 3: The wheels came off a bit in the third. Notre Dame tallied six blocks and the Buckeyes added six unforced attacking errors for a hitting percentage in the red (-.064). A 7-point spurt early on pushed the Fighting Irish ahead for good en route to the 25-14 winner.

Set 4: Ohio State impeded the Notre Dame hot streak to begin the fourth, going ahead 4-1, but couldn’t withstand the eventual barrage resulting in a 25-17 clincher for the Fighting Irish.

Next up is the Buckeye Invitational hosted in Columbus, split between St. John Arena (Friday, Sept. 15) and the Capital Center in Bexley (Saturday, Sept. 16). Ohio State welcomes Dayton, Northern Illinois and Western Kentucky to central Ohio for the round-robin competition.