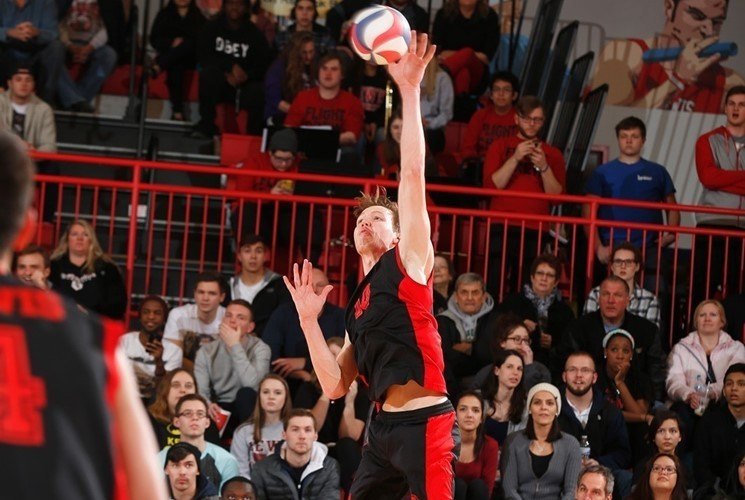 Lewis’ balanced attack was led by Tyler Mitchem with match-highs of 11 kills, .769 hitting and 4 blocks. TJ Murray added 9 kills on .667 hitting (9-1-12) and added 3 blocks of his own. Julian Moses, Ryan Coenen and Mitch Perinar all brought 7 kills to the victory, the Flyers’ second-straight win after starting the season 0-3. Moses also led all floor defenders with a match-high 8 digs. Matt Yoshimoto paced the Flyer attack with 36 assists.

For Saint Francis, 8 kills came off the hand of Stephen Braswell. He also added team highs of 6 digs and 2 blocks. Setter Joseph Koszelak ran the offense by dishing out 21 assists and adding 4 digs. Libero Jonathan Messa also dug 4 balls on the evening.

It was the second straight win for the Flyers, who move to 2-3 on the year. The Red Flash fell to 4-3 on the season.

The teams traded points for much of the beginning of the first set and the teams were tied at 10 when Lewis broke free with four straight points to take a 14-10 lead after an ace by Moses.

Lewis grew its lead to six at 21-15 after a service error. St. Francis pulled to within three points at 22-19 before a Coenen kill. An attack error and a kill from Perinar were the final two points of the set for the Flyers.

The second set was all Lewis as it jumped out to a 3-0 lead and never trailed in the set. After two points from the Red Flash, Lewis scored three straight to take a 6-2 lead.

Later in the set the Flyers scored five straight points to grab a 15-7 advantage and they continued to grow their lead from there.

The third set went much like the first with the two teams trading points throughout the early stages of the set as the first multi-point lead was by Lewis, 15-13, and the Flyers able to maintain the lead the remainder of the game.

First Set
The Red Flash and the Flyers battled back and forth to begin the opening set. The Flyers started to run away with the lead (20-14) and force SFU to call its first timeout. After the timeout, SFU could not rally back as LUC would take the first set, 25-20.

Second Set
Lewis opens the second set with a 6-2 lead, as they would capitalize on some of SFU miscues. They would continue to apply pressure and extend its lead to 21-9 before forcing SFU to burn another timeout. LUC would eventually go on to win the second set, 25-11.

Set Three
As the Red Flash trail 2-0, they open the third set exchanging leads until the Flyers jumped out to a 19-15 lead. LUC would hold that four point lead for the remainder of the set and go on to win 25-21.