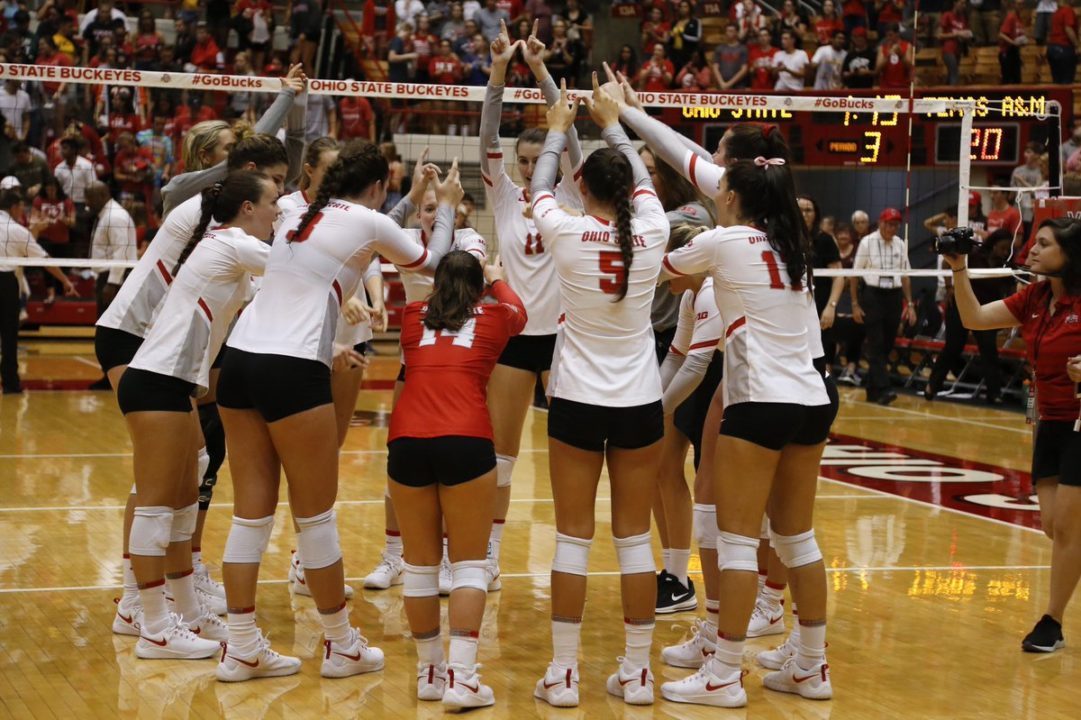 Its back to St. John Arena for the Ohio State women’s volleyball team this weekend. The Buckeyes will get the ball rolling against No. 13 Michigan at 7 p.m. Friday before hosting Michigan State live on ESPN2 Sunday at 1 p.m.  Current Photo via Ohio State Athletics

COLUMBUS, Ohio – Its back to St. John Arena for the Ohio State women’s volleyball team this weekend. The Buckeyes will get the ball rolling against No. 13 Michigan at 7 p.m. Friday before hosting Michigan State live on ESPN2 Sunday at 1 p.m. Sunday’s contest will be OSU’s Dig Pink match to honor breast cancer survivors.

HISTORY WITH THE WOLVERINES & SPARTANS

Ohio State has a 50-26 advantage in the all-time series with TTUN, dating back to 1974. The Wolverines have won the last four meetings, including a sweep of last year’s home-and-home series behind a pair of 3-1 decisions.

The Buckeyes have been victorious in 46 of their 78 matchups against the Spartans. A season ago, Michigan State topped Ohio State in straight sets in East Lansing.

Michigan picked up two wins last weekend when it swept Purdue and outlasted Indiana in five. As a team, the Wolverines lead the conference and rank ninth nationally with 13.66 assists per set. The squad also averages 14.50 kills per set, the 10th-best mark in the country. Individually, Mackenzi Welsh is ninth among the NCAA Division I leaders with 11.54 assists per set while Jenna Lerg’s 5.38 digs per set ranks 18th.

Michigan State went 1-1 over the weekend as it survived Indiana, 3-2, before falling to Purdue, 3-1. The Spartans are among the top teams in the country, averaging 2.85 blocks per set (9th) and 1.72 aces per set (18th). Naya Gros stands 15th in the nation and third in the conference behind a .403 hitting percentage.

ROOKIES ON THE COME UP

Freshmen Mia Grunze and Vanja Bukilić have stepped up to the challenge for Ohio State. Through 18 matches, the rookie duo has combined for 41 percent or 364 kills of the Buckeyes’ team total (889). Grunze averages 2.70 kills per set and has 10 matches in double figures while Bukilić has tallied 14 double-digit outings and 3.02 kills per set.

Ohio State has out-blocked its opponents 10 times, including a season-high 17.0 rejections at Dayton. However, the Buckeyes have had fewer blocks in four of its six Big Ten matchups.

The 2018 campaign is the final season for the Buckeyes inside St. John Arena. The women’s volleyball team will be moving to the Covelli Center, which is set to be complete in time for the 2019 season. The state-of-the-art facility is part of the new Ohio State Athletic District and will span over 100,000 square feet in total and include a locker room and coaching suite designed specifically for the women’s volleyball program.