Women’s Champions League Kicks Off With Win For Sliedrecht Sport 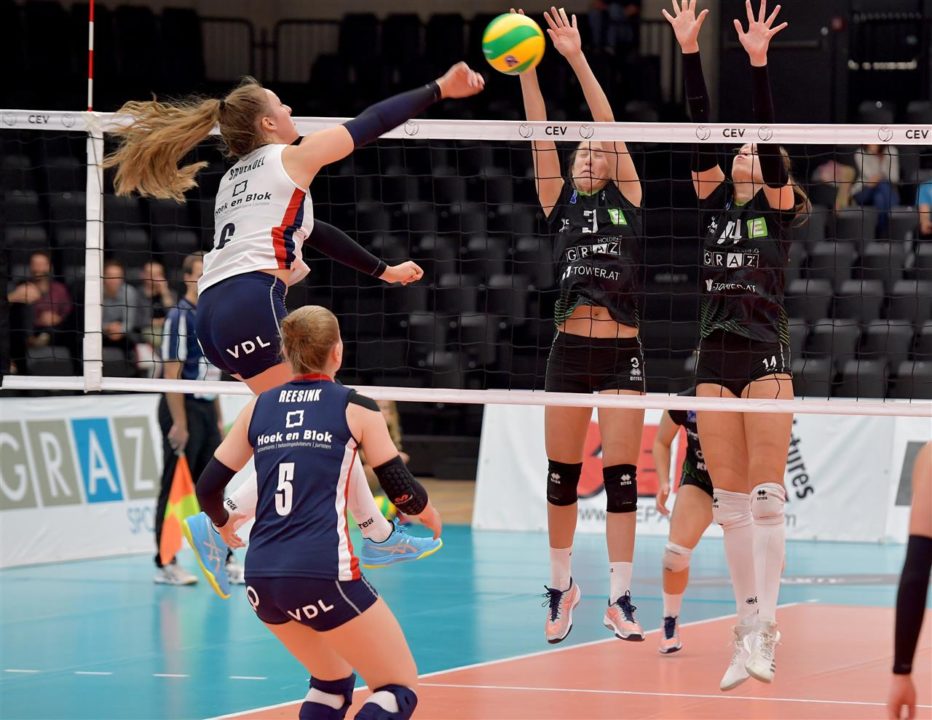 With the FIVB World Championships still taking place, it is easy to overlook that Europe’s top club competition has already commenced. With 23 teams in the competition, there is only a single match up in the 1st Round. Sliedrecht Sport of the Netherlands made quick work of their Austrian opponents in just over an hour. They held sizable advantages in serving, passing and attack efficiency in the sweep.

Carlijn Ghijssen-Jans took control of the match with 12 points on 6 kills, 5 blocks and 1 ace. The middle blocker for Sliedrecht hit .500 (60%) on the night and also registered a match-high in blocks. Brechtje Kraaijvanger only played 2 sets at opposite, but she scored 10 points on 7 kills and a match-high 3 aces. Christie Wolt scored 10 points as well on 9 kills and 1 ace.

Sliedrecht held a 43% to 29% advantage in attack efficiency. This was in addition to a 44% to 32% advantage in positively rated service receptions and a 10 to 6 advantage in blocks.

UVC Holding Graz did not have a single player achieve double-digit scoring. They had Lisa Konrad and Ursula Ehrhart both contribute 8 points. Ehrhart and Konrad led their team with 7 and 6 kills respectively, but they were not efficient. Konrad hit .059 (35%), while Ehrhart posted a .136 (32%) attack average. Anjar Dorfler came off the bench at opposite and put away 6 kills, but she hit .000 (36%) in her 14 attempts.

Sliedrecht is in the driver’s seat to advance to the 2nd Round. They just have to win the next match on October 17th, or lose in 5 sets. A loss in 3 or 4 sets will send the match up to a Golden Set to 15 points. More good news for Sliedrecht is that the match will be played at home for them.